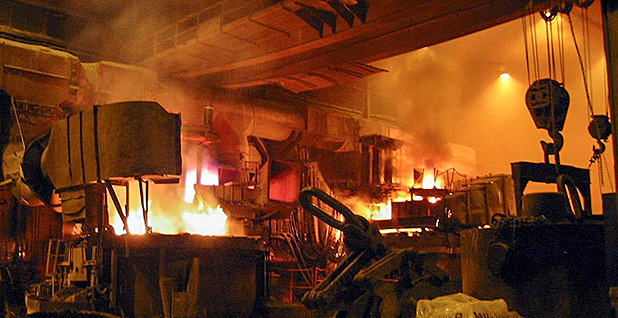 President Trump will soon have an opportunity to make good on his pledge to stand up for American steel and its workers. Payton Chung/Wikipedia

President Trump will soon have an opportunity to make good on his pledge to stand up for American-made steel.

"Steel is a big problem," Trump told reporters last week on a trip to Paris. "We’re like a dumping ground, OK?"

China and other nations are "destroying our steel industry," he said. "They’ve been doing it for decades, and I’m stopping it. It’ll stop."

Trump’s secretary of Commerce, Wilbur Ross, is completing a review of whether U.S. manufacturers of steel for warships, aircraft and missiles require more protection from foreign competition in the name of national defense. Ross could recommend that the president slap higher tariffs or other limits on imported steel. That could boost some U.S.-made steel against cheaper imports from Canada, Mexico or Germany and, in theory, protect against China’s ability to dump steel onto the U.S. market and crater prices.

To make good on his promise to boost America’s steel industry, Trump would also have to succeed where occupants of the White House going back to President Lyndon Johnson failed: achieving a fair and level playing field in a global steel market where almost anything goes, without slowing U.S. economic growth or triggering damaging trade reprisals.

Industries from transistors to wool-knit gloves have sought and failed to get protection under the national security test of the Trade Expansion Act of 1962. In 2001, for example, the Commerce Department denied relief from imports of iron ore and semi-finished steel, finding that national security was not threatened by imports.

Nothing comes for free

Steel is one more global issue testing the new administration’s complex relationship with China, which spans cybersecurity, trade and currency issues, North Korea’s missile threat and more. To keep job growth going at home, China’s government has supported a massive expansion of steel factories, allowing China to take half of the world’s total production, more than the combined output of the United States, the European Union, Russia and Japan.

"A fundamental question — which the world trade system rules don’t adequately respond to — is how do you avoid the creation of overcapacity, in this case vast overcapacity?" asked Alan Wolff, chairman of the National Foreign Trade Council and a former U.S. trade negotiator.

Trump is fighting history in trying to change the direction of U.S. trade policy. In the book "Steel and the State," attorney Thomas Howell, Wolff and two other colleagues speak of one Washington administration after another handling each trade crisis in an ad hoc way. Short-term actions have sometimes helped steelmakers, "but failed to prevent new import surges or a continuing erosion of the U.S. industry position," they wrote.

Trade experts expect that Ross will recommend to Trump either tariffs or quotas on foreign steel, or a combination of both. Countries could have individual quotas limiting steel shipments to the United States, with tariffs imposed on overages. "There are two ways — quotas and tariffs. Maybe I’ll do both," Trump said.

"It is clear that there will be some trade restrictions put into place on steel," Wolff said, and that could open trade battles in all directions.

Last week, 15 former leaders of the White House Council of Economic Advisers, who had served every president from Gerald Ford forward (except for Jimmy Carter), signed a letter urging Trump not to impose sanctions on steel because of the harm to the American economy. "Tariffs would raise costs for manufacturers, reduce employment in manufacturing, and increase prices for consumers," they wrote.

"The U.S. industry is still pushing for a very restrictive measure," said Daniel Pearson, a senior fellow at the Cato Institute and former chairman of the U.S. International Trade Commission.

Pearson calculates that the U.S. steel industry employs 140,000 workers, and advances in technology continue to trim the number of workers employed for each ton of steel production. "The real concern should be about the 6.5 million people working for downstream manufacturers that use steel," Pearson said.

"You only need to jack up the price of steel enough to encourage imports of more refrigerators, and you easily lose more jobs in downstream [products] than all of the direct jobs in steel mills," Pearson said.

Moreover, tough action by Trump on steel would cause foreign governments to throw up barriers against U.S. exports, Pearson said. "If other countries think Ross and the president have stepped across the line, U.S. agriculture is going to be hit," he said, as will other sectors, on up to the most advanced technologies. And the conflicts won’t just be with China. The U.S. imports steel from 110 countries and Canada and Mexico — two North American Free Trade Agreement partners ranked No. 1 and No. 4 in steel imports to the United States, with China importing far less.

Conduits for an energy boom

The energy sector illustrates both the damage that steel imports have caused and the potential for higher costs on products made from steel.

At Commerce Department public hearings on the steel issue, John Brett, chief executive of ArcelorMittal USA, noted that his company is the largest supplier of armor steel plate for U.S. armed forces, providing steel for tanks, aircraft carriers and other weapons systems. (The U.S. subsidiary of Luxembourg-based ArcelorMittal SA is the largest U.S. steel manufacturer.)

ArcelorMittal is also a major supplier of pipelines for the oil and gas industry, conduits for the boom in U.S. oil and gas production that Trump hopes to see.

Brett noted why imposing import limits on a national security basis alone may be hard for Trump. "Our sales into defense applications represent only 1 percent of our total production and less than 5 percent of our steel plate production," he said. "In other words, defense-related sales of steel alone are not the determining factor in whether a steel mill is successful and sustainable."

Steel imports into the United States tripled between 2009 and 2014 and are still twice the levels in 2009. U.S. steel plate producers’ operating income fell by 75 percent, Brett said, hitting hard his company’s investments in new technology and thus its future competitiveness in all its product lines.

The United States has become heavily dependent on imports in this sector, too, Rintoul said. "Today, imports make up approximately 50 percent of the OCTG market. Driven by Chinese manufacturers over the last several years and now overtaken by South Korea, foreign suppliers have made it their mission to steal this market from U.S. companies," he added.

"In just the last few years, we have been forced to abandon more than 40 percent of the OCTG products we previously made," he said, with the closure of half the division’s mills since 2014. At the same time, South Korea and China make it almost impossible for U.S.-made OCTG steel to enter their markets.

But at Commerce Department hearings, Ross also heard the other side, including an appeal from 18 U.S. companies that purchase steel to produce building materials, including metal roofing. Only a few American mills produce the leading version of the roofing, they said, and only certain customers can get it at competitive prices.

Without imports, "our ability to compete will be reduced or eliminated," they said.

The 18 companies came from smaller cities and towns whose locations suggest home base for the Trump constituency: Dawson and Doerun, Ga.; Temple and La Grange, Texas; Olympia Fields, Ill.; Humboldt and Parrottsville, Tenn.; and Nettleton, Miss.

As a candidate, Trump could tailor his message and make promises to steelworkers and factory workers in Rust Belt communities. But with him as president, the fact remains that a steel trade war would hit everyone, in all parts of the country.