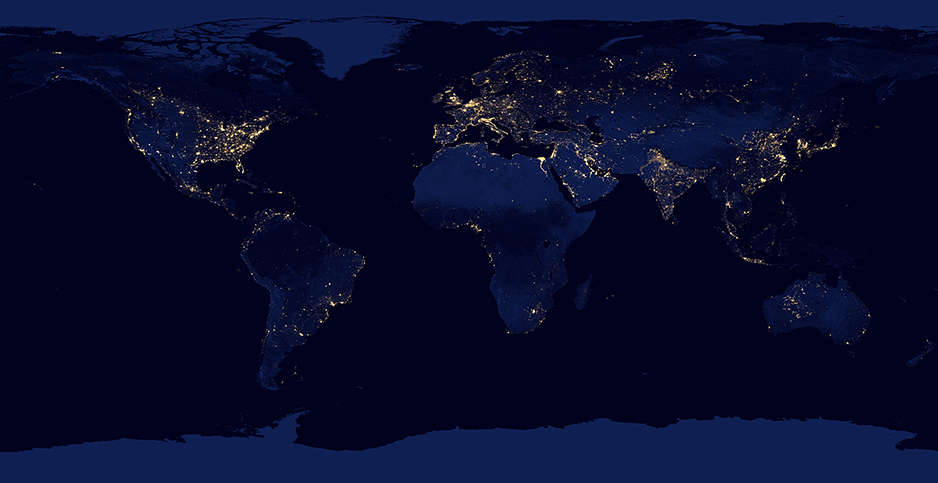 Earth at night as seen from a NASA satellite. Decreases in global temperatures won't occur for years after carbon dioxide emissions are reduced. For now, they're still rising. NASA/Wikimedia Commons

Climate action taken by the world today wouldn’t be noticed for decades to come, according to researchers who say warming on Earth won’t start to slow down for at least 20 years.

And that’s probably an optimistic scenario.

A study published Tuesday in Nature Communications illustrates how the rewards for aggressive action would come much later. If global carbon dioxide emissions began falling tomorrow by at least 5% every year, the rate at which the Earth is warming wouldn’t begin to change — at least in a detectable way — until after the year 2040 or so.

The situation is similar, in some ways, to a "very large ship, which is at high speed," said Marianne Lund, a climate scientist at the Center for International Climate Research (CICERO) in Norway and one of the study’s co-authors.

"When you want to change direction, you put your engine in reverse and you turn your wheel full over, but it still takes such a long time before you start seeing your big tanker ship really change or turn," she said in an interview. "That’s like CO2."

That’s partly because the climate system itself is slow to respond to changes in factors like greenhouse gas concentrations. It’s a phenomenon known as "climate inertia" — it means the carbon that humans put in the atmosphere today may continue to affect the climate for decades to come.

That’s especially true for CO2, which lasts for decades in the atmosphere. Even if CO2 emissions dropped to zero today, a certain amount of warming would already be locked into the system in the coming years.

Even for gases with shorter atmospheric life spans, such as methane, fast action doesn’t necessarily result in a quick payoff. The climate system is full of short-term variability — that is, global temperatures tend to fluctuate from one year to the next, even if they’re clearly rising in the long term.

This year-to-year variability, or "noise," can make it difficult to pinpoint long-term trends in global temperatures. It can take years for those patterns to emerge.

The new study, led by Bjørn Samset (also of CICERO) and co-authored by Lund and colleague Jan Fuglestvedt, took a systematic look at the issue. They used models to evaluate various greenhouse gases — including CO2, methane and black carbon (also known as soot) — and how quickly immediate reductions would begin to pay off.

The results suggested that there’s no "easy fix" to the problem, Lund said. While targeting some greenhouse gases may result in slightly faster results than others, they all take decades to start producing noticeable effects.

It’s not the first study to reach that conclusion.

"I think it’s a step forward in the sense of both adding some more information, doing things more sophisticatedly — but the general message hasn’t changed," said Claudia Tebaldi, a climate scientist at the University of Maryland’s Joint Global Change Research Institute, who commented on the new study for E&E News.

Some of Tebaldi’s previous research has come to similar conclusions.

The delayed results are a fact of the climate system. They don’t mean climate mitigation efforts don’t work, just that they take time. In the meantime, it’s important to make sure the public understands that there will be delays.

"I think just making sure that we don’t feel that we lose motivation or feel that this is for nothing, if we don’t see things changing as quickly as we might hope," Lund said. "So just being very clear about the expectations in terms of detecting a temperature response or temperature change."

While global temperature goals are a clear focus of climate action plans — including the Paris Agreement — there are other benchmarks scientists can use to evaluate whether climate action is working. Monitoring the concentrations of greenhouse gases in the atmosphere, for instance, is one way to keep track of how fast emissions are falling.

Regardless of exactly how scientists monitor the success of global climate action, it’s clear that sustained, long-term emissions reductions are necessary to produce results.

"I feel like a better education and a better communication of the general nature of this complicated system that we live in would be beneficial in then making people understand that they cannot expect immediate results," Tebaldi said. "But it’s all money in the bank that will carry through in the long term."