Slaves were given an island over 150 years ago. Then Irma struck 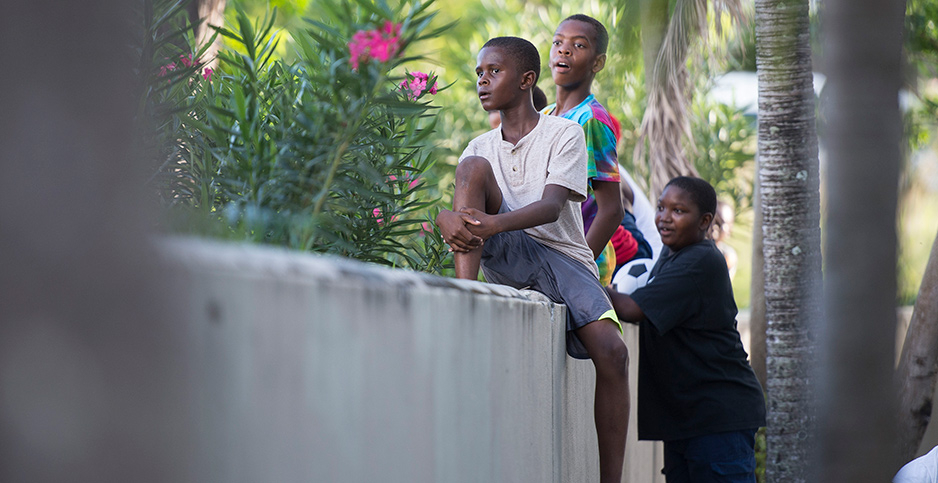 Children evacuated from Barbuda outside a temporary shelter in Antigua in November. Victoria Jones/PA Wire/Associated Press

First of a two-part series. Click here to read the second part.

Last year’s devastating hurricanes may have swept away one of the world’s few examples of slavery reparations.

The 1,800 residents of Barbuda can trace their ancestry to slaves who worked on the Caribbean island to the late 17th century, when it was a supply station for sugar cane plantations. When abolition arrived more than 100 years later, their former masters, the British Codrington family, abandoned the tiny dot of land, and the slaves used it to develop a method of cooperative land ownership that has supported them and their descendants through the generations.

"They weren’t called reparations then, but we’re using that term now," said Diann Jeffers, a Barbudan who lives in New York City. "We came to know it that way, because we wanted the land to be passed down, to ensure continuity."

And now Hurricane Irma has opened the door for change.

Barbuda shares a country with a larger and more economically developed sister island, Antigua. And many leaders there, including Prime Minister Gaston Browne, have long held that the post-slavery land rights enjoyed by Barbudans inhibit the island’s ability to attract economic investment. That makes the island dependent on federal handouts from Antigua.

Reshaping the island’s ancient land ownership system has long been flirted with. But Barbudan opposition made it politically difficult. Then Irma crashed into the island Sept. 6, destroying an estimated 95 percent of the buildings on the 62-square-mile outcropping and driving its inhabitants to shelter on Antigua.

The storm is consistent with the kind of supersized hurricanes scientists say could be more common as the oceans warm due to climate change.

In the wake of Irma, the Browne government has been criticized for the slow pace of Barbuda’s recovery. Many houses are still not connected to water or power six months later. Meanwhile, work on a new airport runway has continued, a move many Barbudans see as an invitation to tourism development, supported by Antiguan officials. The government has also moved to amend the Barbuda Land Act — the law that in 2007 codified the post-slavery land-use system, limiting land ownership to descendants of Codrington’s slaves and specifying that much of the island must be available for that community’s traditional economic activities, including farming, hunting and fishing.

In December, with most Barbudans still not home, Browne and Barbudan Sen. Arthur Nibbs, who supports the changes, circumvented usual notice procedures to bring a bill before the nation’s Parliament that would allow Barbudans to purchase small plots for $1. But it would also make the greater part of the island available for other uses — with less local oversight.

The amendment has now passed both legislative chambers and will become law any day, when the nation’s Governor-General Rodney Williams signs it.

Sanders, the ambassador, declined to say why the expedited legislative process was pursued. Plans to place it on the legislative agenda were made public only through an unauthorized press leak.

John Mussington, principal of Barbuda’s secondary school and an outspoken opponent of the plans, accused the prime minister of employing a "shock doctrine." Mussington, who said he was forced off the island by national security forces following Irma, said the evacuation was part of the government’s plan to weaken opposition.

"In their state of weakness, you pulled this on them in terms of changing their land rights system when you knew they would be least likely able to defend themselves and resist attempts," Mussington said of Browne’s government.

The system of land ownership that Browne and his supporters are seeking to replace is similar to the "family lands" systems that exist in other former British West Indies colonies. It guarantees Barbudans perpetual ownership of the island by making it impossible for outsiders to purchase land, a provision that Mussington and others say is necessary to prevent land values from rising to the point where a relatively poor native population would quickly be priced out.

"This would affect me and my descendants in that there would not be much left for us to pass down to our descendants," said Jeffers, a health care union consultant living in the Bronx who, like many Barbudans, maintains strong ties to the island.

Besides promising them a home, the communal land system also provides Barbudans access to "the grounds" — land they can use on a rotating basis to supplement their diets and incomes.

Jeffers remembers her grandmother leaving every morning on the family donkey to tend her sweet potatoes, peas and other crops designed to flourish in Barbuda’s bad soil.

"I remember my grandmother saying, ‘I’m going to my grounds,’" she said.

The local council is tasked with allocating land for resident fishing, crabbing and other seasonal activities. Soldier crabs migrate in the spring months, so that’s when islanders collect crab roe to make a dish called "soldier fungi," which has African roots. Hunting and fishing are also practiced sustainably and allow the local population to avoid paying a premium on imported protein.

"This would help to subsist us when people couldn’t find work, when the hotels weren’t open, when you retired and didn’t have an income," said Jeffers, who says she makes the journey home several times a year. "It would help you to live. We lived off the land. What these developments and projects would do is totally change our way of life."

Browne views the Barbuda Land Act as unconstitutional and contends that the island belongs to the nation as a whole and not to Barbudans alone. The ancient system of land ownership has rendered Barbuda a "glorified welfare system," he told The New York Times in a recent interview.

Changes to the ancient system will help open Barbuda to business, he said. Barbuda currently has a sharp limit on the duration of leases to outside companies. Meanwhile, Antigua welcomes cruise ships and all-inclusive resorts. Browne has not been shy about expressing his hopes for a post-Irma Barbuda.

"You cannot run a country on sentimentality," he said. "We’re saddened by the extent of the damage, but there are opportunities to be exploited."

Browne did not respond to requests for comment, but he has told other news organizations that his amendment will give Barbudans the "option" of gaining individual control over their land, not rob them of rights.

Browne and Sanders contend that Barbudans live at the expense of Antiguans, but there are few published figures to support that claim. The island does have its own local government funded by the Antiguan and Barbudan government in St. John’s. Sanders stated that before the storm, there were 300 Barbudans on the government payroll as cleaners, out of about 1,600 full-time Barbuda residents.

But he declined in an interview to answer questions about how public services and salaries provided to Barbudans compared with those provided to other regions of the country. Publicly available budget documents for Antigua and Barbuda don’t provide separate line items for Barbuda. And while they agree that the government is a very large employer on the island, Barbudans note that they pay taxes, too.

Orlando Morris, a spokesman for the Barbuda Council, said the government in St. John’s provides a percentage of Barbuda’s budget. He said national coffers this year provided about 40 percent of public spending on the island, or around $10 million.

Barbudans say the government response has been painfully slow since Irma, especially given the millions of dollars in international aid and insurance payments the country has received to help with the process.

The government claims that power has been restored to the island, but while power poles are up and transmission infrastructure is in place, the public utility has prescribed expensive upgrades to homes’ electrical systems before they can be connected. Morris of the Barbuda Council said the upgrades — which will be made at homeowners’ expense — are necessary because most of the wiring on the island is very old.

Between 300 and 500 Barbudans have come home despite the damage. Some sleep in tents in their front yards. But there have been sharp incongruencies in the recovery that underscore tensions between the two islands.

When Barbudans asked for the schools to be reopened in mid-November, the national education ministry did not respond to the request. Islanders led by Mussington then took matters into their own hands, opening a school in a church. The Ministry of Education responded by dispatching a truancy officer to the island but eventually bowed to local pressure and reopened the schools.

Meanwhile, nongovernmental institutions and international organizations are filling in the gaps for the needs of those returning.

China Aid and the United Nations Development Programme ran afoul of Browne on a recent fly-in when the prime minister was angered to see "UNDP-China Aid" stickers on houses they were re-roofing. He demanded they be taken down, insisting they didn’t give the national government enough credit for the work it was doing on the recovery.

Stephen O’Malley, the UNDP representative overseeing work on Barbuda, said the island’s recovery was always likely to be slow.

"There are real logistical constraints in this story," he said. "It’s a difficult task for the government."

Building materials must come through Antigua, traveling the 30 miles to Barbuda via a limited and overstressed ferry system. Work crews have to be brought to the island and fed and sheltered. The Browne government is paying to shelter storm victims in Antigua and for their security.

Morris stressed that the resettlement in Antigua is expensive, and it continues to feed and shelter hundreds of unemployed people.

Sashagay Middleton, a marine ecosystems consultant with a nonprofit contracted to the Antiguan and Barbudan Department of Environment, has found herself organizing meals, counseling services and subsidized ferry rides for returnees. She also helps their children access tutors while the schools remain closed.

"We’re not set up to be a disaster relief fund, but given the situation in September, we recognized that a lot of donors wanted to channel funds through [nongovernmental institutions] rather than government," she said.

Middleton, who is originally from Jamaica, said local residents were frustrated with Antiguan politicians’ response to the crisis, which she characterized as flying into the island with an entourage, looking around and leaving — generally without speaking to any of the inhabitants.

"They don’t feel that the government is looking out for them," she said.