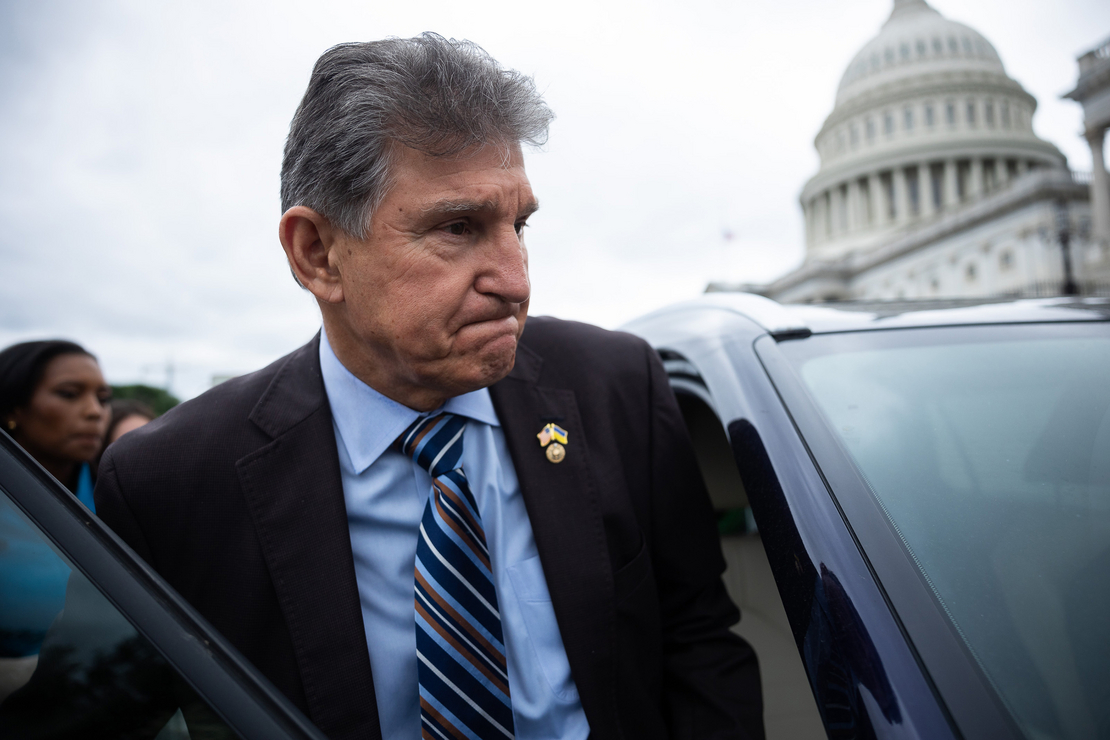 Democrats will continue their attempts to revive their sweeping climate and social spending bill as the new congressional work period begins this week, with Sen. Joe Manchin’s bipartisan energy talks appearing to fall by the wayside.

Manchin, the West Virginia Democrat who chairs the Senate Energy and Natural Resources Committee, has been meeting in recent weeks with Majority Leader Chuck Schumer (D-N.Y.) to try to come to terms on a slimmed down reconciliation bill.

Manchin has also been convening a bipartisan group to discuss a potential energy and climate bill, but the talks are faltering. The group has not come close to writing a bill, and multiple outlets reported last week that the negotiations are effectively dead.

A person familiar with the bipartisan talks, who was granted anonymity to speak candidly, said they’re falling apart, with Republicans stepping away and Manchin ramping up reconciliation talks with Schumer.

“Manchin informed us in the last meeting that reconciliation is probably the route he’s going down,” Sen. Kevin Cramer (R-N.D.), a member of the bipartisan gang, told Axios in a story published last week.

But another Democratic person familiar with the discussions said the idea that talks are completely dead does not match the tone of the group’s last meeting, though this person noted that another round of talks has not yet been scheduled.

A Manchin spokesperson, meanwhile, said the West Virginia Democrat “continues to work with his bipartisan colleagues to find solutions that address our nation’s climate and energy security needs.”

After the group’s last meeting, Republicans emerged questioning whether the talks would proceed or if Manchin would opt to join other Democrats on a party-line reconciliation bill (E&E Daily, May 26).

“We’re not at the point of having a bill,” Sen. Mitt Romney (R-Utah) said after the meeting. “And the question is whether we will ever have a bill or whether instead there will be a move through reconciliation for those items that the Democrats agree on.”

Manchin, too, acknowledged that the timeline for a bipartisan deal was running short.

“The bottom line is we got some tight windows here we have to work in, but we’ll see,” Manchin told reporters. “We’ve just got to make some decisions here.”

If Schumer and Manchin are able to strike a deal on reconciliation, it will be more modest than the $1.7 trillion “Build Back Better Act,” which Manchin killed last year.

The Washington Post reported yesterday that nearly six months after the bill’s demise, Manchin and the White House remain at odds over how the talks fell apart.

Broadly, Manchin has outlined a path to a deal that encompasses climate and energy, drug pricing and reforms of the 2017 GOP tax cut law. The climate provisions of “Build Back Better” were centered on roughly $300 billion in clean energy and electric vehicle tax incentives, but Manchin has been insisting on policy to boost fossil fuels and address high energy prices.

He also raised questions last month about whether an eventual reconciliation product would even include a clean energy and climate component.

“We’re looking to see if there’s a pathway forward for that, and if there’s going to be a climate or energy bill, or is this just going to be just a tax bill because the only thing we all agreed on was the tax changes that were made in 2017 were weighted unfairly,” Manchin told reporters last month.

On Sunday, a top Senate climate hawk suggested that a Democrat-only deal could be had on a limited menu of items.

“We could get a climate package via reconciliation with most of Finance [Committee] tax credits, the [Environment and Public Works Committee] methane price, and a border adjustment,” Sen. Sheldon Whitehouse (D-R.I.) wrote on Twitter.

Much of the immediate action in the Senate this week will likely focus on guns. A bipartisan group of lawmakers has been discussing mental health measures and expanded background checks in the wake of the mass shooting at an elementary school in Uvalde, Texas.

And in the House, much of the attention will be on the select committee investigating the Jan. 6 Capitol riots, which will begin its public hearings Thursday with a prime-time TV slot.

Whether these events pull attention away from reconciliation talks is unknown, but the ongoing partisan back-and-forth on inflation and energy prices is certain to continue. U.S. gas prices have continued to set new records in recent weeks, with the average price for regular gas nearing $4.85 per gallon as of yesterday, according to AAA.

It’s a global issue, driven in part by Russia’s invasion of Ukraine and the pandemic, that likely has little potential for immediate policy solution. But Democrats and Republicans continue to use it as a wedge with midterm elections approaching.

The Biden administration has defended its actions, including releases from the Strategic Petroleum Reserve and attacked oil companies for raking in profits.

“We also know that the price of gasoline is not set by a dial in the Oval Office,” Transportation Secretary Pete Buttigieg said yesterday on ABC’s “This Week.” “And when an oil company is deciding, hour by hour, how much to charge you for a gallon of gas, they’re not calling the administration to ask what they should do; they’re doing it based on their goal of maximizing their profits.”

Republicans, meanwhile, will likely be on the attack this week.

“We have watched this president go after energy, so we can no longer be energy independent,” House Minority Leader Kevin McCarthy (R-Calif.) said on Fox News yesterday. “The price of gasoline has doubled.”