‘Slimy is the new sexy’ with National Send a Nudibranch Day 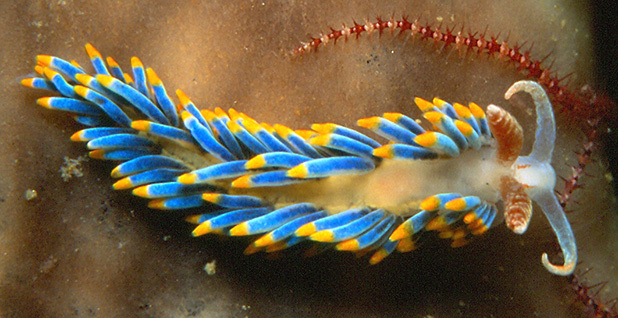 It's called a nudibranch. Photo by Parent Géry, courtesy of Wikipedia.

As an online discussion blazed around naked selfies spurred on by the rising hashtag #NationalSendANudeDay, nudibranch enthusiasts co-opted the meme by passing around au naturel pics of the wildly colorful, ocean-dwelling invertebrate.

It was a tweet from Ariel Zych, education manager at Public Radio International’s Science Friday, that sparked the flurry of activity: "I move we replace #NationalSendANudeDay with #NationalSendANudibranchDay." A handful of science groups, including the Catalina Island Marine Institute and the Natural History Museum of L.A. County, picked up the hashtag.

But the nudibranch is more than eye candy, said Terry Gosliner, a leading nudibranch evolution researcher and senior curator at the California Academy of Sciences. It’s also a valuable indicator of a healthy marine environment and of rising ocean temperatures.

The nudibranch, also known by its less sexy epithet the sea slug, gets its name from the Latin "nudus," or naked, and Greek "brankhia," meaning gills. The nudibranch takes its pigmentation from animals it eats. It can change expression by chemically modifying what it consumes — brightly colored species can feed on drab sponges, said Gosliner.

Off the coast of California, where Gosliner works, the nudibranch can be found in intertidal pools. But they also live in deeper waters. More than 3,000 species of nudibranch inhabit the world’s oceans, from shallow eddies to some of the deepest underwater trenches. Its range includes tropical coral reefs and frigid Antarctic waters.

"What we’re seeing is not so much declines in number but changes in distribution. This is particularly true of a lot of the temperate species we find," he said.

Take the Okenia rosacea, commonly called the Hopkins’ rose. Native to Southern California, the species is becoming more frequent along the central and Northern California coast. It’s one of many nudibranches moving into colder waters, said Gosliner, who first started seeing early changes in another species’ range in the mid-1990s.

At more than 150 likes, the nudibranch trails far behind nudes on Twitter, where #NationalSendANudeDay passed 1 million impressions, trending yesterday afternoon.

But the nudibranch hashtag’s creator, Zych, is encouraged by the attention they’ve received.

"It was a bit of a surprise, but a heartening kind of surprise."

"We celebrate all things tentacled," she said. "It’s kind of a big deal."