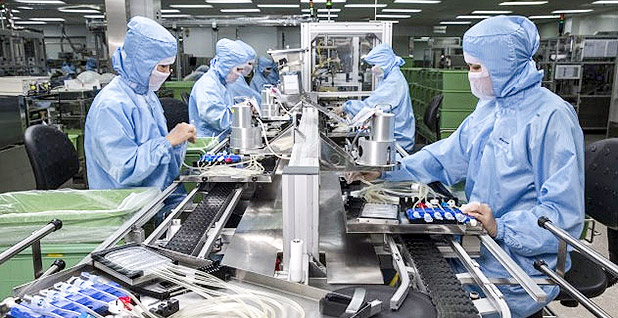 As Puerto Rico’s recovery from Hurricane Maria drags into its third month, the island’s key industry — medical manufacturing — has been slow to reconnect to the power grid, creating a drag on the economy and contributing to a shortage across the U.S. medical system.

Eighty facilities overseen by the Food and Drug Administration went dark when the hurricane hammered the island in late September. All have been repowered, some with grid electricity and some with generators, but that doesn’t mean a return to normal. Lights still flicker, fuel is scarce and closed roads make transportation difficult.

The impact has been felt at U.S. hospitals as a critical shortage of intravenous bags, which are used to deliver water and salt, as well as many drugs, to patients’ bloodstreams. The main supplier, Baxter International Inc., does all of its domestic manufacturing of the bags in Puerto Rico. The shortage has begun to ease — not because Baxter’s island factories have cranked back up but because the FDA relaxed rules that limit shipments from abroad.

That a key product is made exclusively on an island 900 miles from the mainland has opened the pharmaceutical industry to criticism.

"They decided to concentrate all this production in one facility," said Erin Fox, the director of drug information at the University of Utah who also maintains a database of national drug shortages. "That doesn’t seem like a very smart decision if you want to have a consistent supply for hospitals."

The energy issue is serious enough that the FDA has leaned on the Federal Emergency Management Agency, which is leading the island’s post-hurricane recovery, to prioritize the electrical reconnection of medical factories.

"Unfortunately, most manufacturers are still relying on generator power, and even those that have returned to the electrical grid continue to face interruptions as the grid is rebuilt," the FDA said in a statement to E&E News. "As part of our efforts to reduce the risk of further shortages, the FDA has been working with federal and local government partners to prioritize a small number of critical facilities based on public health needs, including those plants that manufacture IV saline bags, for consideration or prioritization to gain earlier access to the electrical grid."

A swoon in the pharmaceutical and medical device industries could exacerbate an already difficult recovery for the Puerto Rican economy.

The two sectors accounted for 30 percent of the island’s gross domestic product last year, according to the Puerto Rico Planning Board, a government agency. Another government arm, the Puerto Rico Industrial Development Co., estimates the factories employ 18,000 people.

They also make up two-thirds of the island’s manufacturing GDP, a sector that has been a bellwether of Puerto Rico’s shrinking economy. The territory has been in recession since 2006, when a crucial tax break, called Section 936, was phased out and caused manufacturers to flee. From 2006 to 2016, the island’s GDP declined by 15 percent, while the island lost 444,000 residents.

But a variety of other tax breaks, plus a skilled workforce, have motivated some of the world’s largest drug companies and medical supply companies, such as Medtronic PLC, Eli Lilly and Co., and Bristol-Myers Squibb Co., to maintain a heavy presence in Puerto Rico. Thirty drug products and 10 medical devices are made primarily or exclusively on the island, according to the FDA, including oncology products, HIV medications and cardiovascular drugs.

Eight percent of the dollars Americans spend for pharmaceuticals — or $40 billion — is from products made in Puerto Rico, according to the FDA.

In the wake of the storm, no drug or medical device companies have announced plans to leave or to shift production elsewhere. They have focused their public statements on locating and helping thousands of employees who suffered from the hurricane and donating millions of dollars to relief efforts.

But financial disclosures do give a sense of the pain.

Pfizer Inc., one of the largest manufacturers on the island, reported in its third-quarter earnings statement that it lost $55 million in inventory and downtime. Meanwhile, Amgen Inc., a major pharmaceutical manufacturer based in California, reported losses of $67 million in the third quarter related to Maria and said it anticipated losses of up to $100 million in the last three months of the year.

The companies themselves, as well as an industry association, say the worst is behind them. "One or two have problems, but otherwise things seem to be well-managed and under control," Rodrigo Masses, the president of the Puerto Rico Manufacturers Association, said in an interview.

But the turbulence in the wake of Hurricane Maria has some in the pharmaceutical industry wondering if the island’s manufacturing stalwarts may shift production elsewhere, if only to hedge against the chaos of a future hurricane.

"If suppliers shift off island, then those could be permanent changes," said Gabriel Levitt, the president of PharmacyChecker.com, a site that compares online prices for drugs.

The hiccups at Baxter’s Puerto Rico factories have affected hospitals across the country.

The principal shortage is of small 0.9-percent sodium chloride bags, otherwise known as saline, that are a hospital’s preferred means of hydrating patients. Other bags premixed with drugs like dobutamine and dopamine are also in short supply, said Fox, the University of Utah drug specialist.

They also serve as "piggyback bags" for a wide variety of drugs that are diluted in saline. The Cleveland Clinic, a major hospital system based in Ohio, normally uses 34,000 of the bags a month, but with the shortage, it has had to improvise in order to get 350 different drugs into patients’ bodies. "We have the drugs, but we don’t have a way to deliver them," said Scott Knoer, the hospital’s chief pharmacy officer.

Knoer said it isn’t putting patients at risk, but it is creating a headache for busy nurses, who have to mimic the slow drip of an IV with a hand-held hypodermic needle. "The nurse has to stand there and, with their thumb, push it in over five minutes," Knoer said. "So the labor on nursing is much more intense."

The lack of bags has also snarled workdays for pharmacists, who have to spend more time formulating pharmaceuticals to be delivered by mouth or needle. They have also spent hundreds of hours of informatics time to make the alternatives work within hospital computer systems, said Fox.

"Pharmacies are really crushed with the workload of making it all happen," she said, adding that her hospital is down to a two-week cache of IV bags. "We have been doing everything we can to try to stretch the supply."

The crunch is starting to ease, Knoer and Fox said. The main reason is that the FDA, in response to the Puerto Rico crisis, has waived rules that forbid imports of critical medical supplies from other countries. Baxter is preparing to import from its factory in Ireland, and competitors from Germany and Spain will soon dispatch IV bags. Baxter has announced a rationing system based on the size of the hospital.

Baxter, which reported that it would lose $70 million in the fourth quarter because of the hurricane, detailed its response to the hurricane in a statement to E&E News.

"We have connected two of the three manufacturing facilities — as well as our distribution center — to the electric grid in Puerto Rico," the supplier said. "We continue to work on connecting our third manufacturing facility to the electric grid, and in the meantime we are running the facility on diesel generation. We continue to maintain diesel generation backup across all of our facilities on the island, because grid power can be intermittent.

"The speed of recovery is also impacted by the severe damage to roads and bridges as a result of the storms. We are managing those challenges by using smaller transport vehicles to efficiently transport supplies and materials on the island."