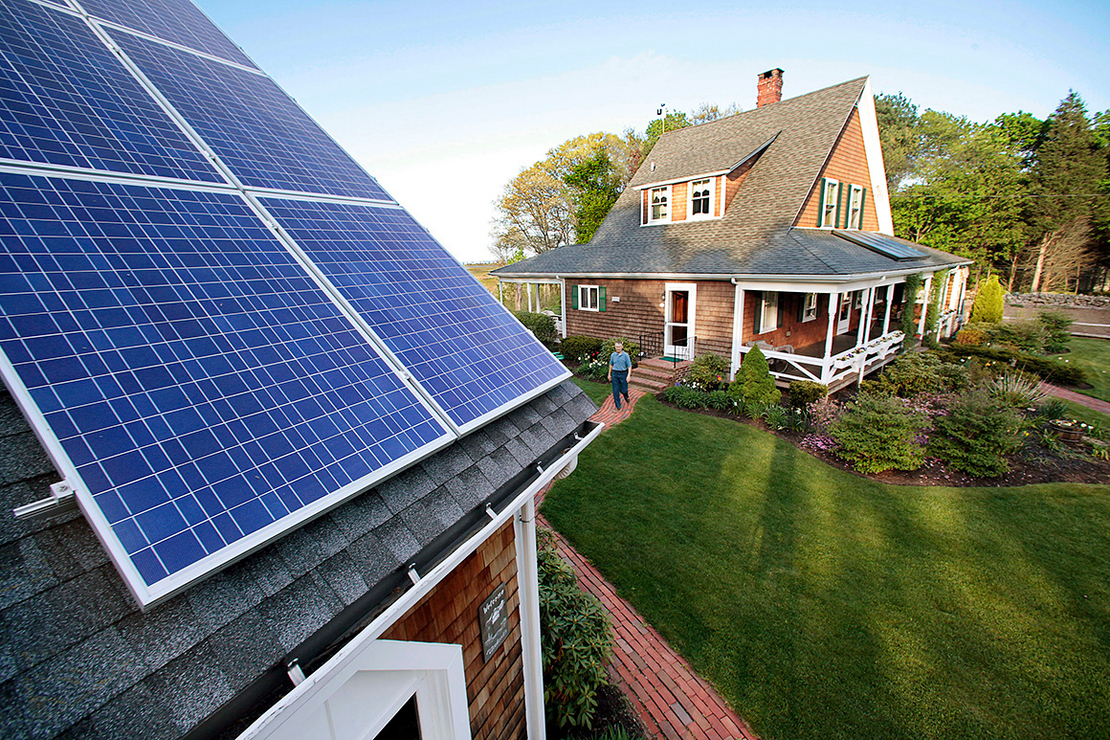 GREENFIELD, Mass. — When Claire Chang and her husband started a residential solar company here in 2008, installing photovoltaic panels on homes was a niche business. Most customers were older. The vast majority had already gone to great lengths to cut their electricity consumption. And those who installed panels on their homes were willing to absorb the costs.

“The costs were so high it was a very small group of people,” Chang said. “These were the clothesline people. It was a different mindset.”

Fourteen years later, distributed solar in New England is anything but small. So many panels have been installed on homes and businesses that New England’s fleet of small-scale solar systems can crank out more power during the middle of the day than its two remaining nuclear facilities. Wholesale power prices increasingly turn negative during the daytime hours, with power generation exceeding demand.

Such trends were once confined to California, but no more. ISO New England, the regional grid operator, says nighttime electricity consumption has eclipsed daytime demand on more occasions this year than in all previous years combined.

“This is something that you would never see five to 10 years ago,” said Matthew Kakley, a spokesman for ISO New England. “It was just a given that your low point in electricity demand would be during the overnight hours.”

A transmission line carrying hydropower from Quebec to New England was nixed by voters in Maine. Large-scale solar projects are encountering opposition from those worried about developments on farmlands and forest. Work on the region’s first offshore wind farms has only just begun after permitting challenges during the Trump administration and a two-decade legal battle over the first facility proposed off Massachusetts. Onshore wind, meanwhile, is so limited that ISO New England is tied for last among the country’s seven independent system operators in wind penetration.

The result is a dearth of large-scale renewable generation in the region. Utility-scale wind and solar generated 5 percent of New England’s power last year.

The emergence of residential solar has “helped the region continue with its progress where it otherwise would have struggled to meet its climate objectives,” said Paul Hibbard, a former Massachusetts utility regulator who now works as a consultant at the Analysis Group.

The solar boom has been driven largely by Massachusetts, which has offered a series of incentives to homeowners and businesses to install panels on their property. Massachusetts accounts for roughly two-thirds of the behind-the-meter solar installations in the region.

The combination of falling module costs and state incentives has contributed to a shift in the customers walking through Chang’s door. An increasing number of customers are younger. The systems they are installing have gotten larger. And their reasons for going solar have also changed.

“Now, it is to electrify,” she said, noting that people are looking to pair solar with electric vehicles and heat pumps. Each international climate conference also tends to produce a bump in business.

Distributed solar differs from utility scale projects because it is behind-the-meter. Panels on homes and businesses do not respond to directives from the grid operator. As a result, as businesses like Weaver’s have grown, New England’s grid has changed.

Traditionally, electricity demand in New England peaks during the day. The region typically sees its largest peaks in summer, when air conditioning load drives up consumption of electricity.

Installing solar behind-the-meter on homes and businesses looks like energy efficiency to the grid operator, effectively reducing demand at times of the day when electricity consumption would otherwise be higher.

Take Thanksgiving Day as an example. Traditionally, electricity demand would peak in the mornings in New England, as residents turned on their stoves to cook turkey. But in 2018, electricity demand didn’t peak until the evening because behind-the-meter solar installations were supplying that power, according to ISO New England. The grid operator said that was possibly the first Thanksgiving ever when power demand had peaked in the evening.

“It is a visual indication of what we see coming, which is the grid is changing,” Kakley said.

The grid operator estimates nearly 4.8 gigawatts of behind-the-meter solar has been installed throughout New England. The region’s two remaining nuclear plants, by comparison, have a combined capacity of 3.4 GW.

Still, nuclear plants generate power around the clock while solar produces electricity during parts of the day. As a result, nuclear still generates far more electricity. In 2021, nuclear generated 27 terawatt-hours of electricity compared to 4.8 TWh for behind-the-meter installations.

The growth in solar nevertheless points to larger changes afoot. Many analysts expect renewables to shoulder an increasing amount of the region’s electricity burden. The question is what will replace them in the moments when the wind isn’t blowing or the sun isn’t shining.

The region’s wholesale power market undervalues fast discharging resources, he said. New England also needs to ensure it has adequate incentives in place to ensure that conventional resources have a financial reason to stick around to provide backup, he said.

“It isn’t just keeping the lights on. It is keeping the heat pumps going and the cars charged,” Dolan said.

Ultimately the region is going to need a combination of new resources and conventional ones, he said, adding, “We’re going to need all the parts of this together.”

There is also the question of who benefits from behind-the-meter solar. The vast majority of projects installed to date have been installed by individuals with the means of affording the panels and the property to place them on, said Jennie Stephens, who leads the school of public policy and urban affairs at Northeastern University.

Poor families, who generally spend a greater share of their income on energy, can’t afford putting panels on their homes. They also may not own the home they live in. State incentives have largely been tailored toward those who own their homes, she said.

Policymakers need to focus on ways of expanding incentives to low-income homes if the benefits of solar are to be shared, she said.

In climate terms, one of the bigger questions is how much of the clean electricity burden distributed solar can carry, particularly if other forms of clean electricity are not brought online. When Massachusetts officials sketched out pathways to achieve net-zero emissions by 2050, seven of their eight scenarios predicted the state would need 7 GW of behind-the-meter solar by 2050. ISO New England estimates Massachusetts behind-the-meter solar capacity will reach 6.3 GW in 2031.

The eighth scenario imagined 17 GW of distributed solar, with panels installed on nearly every roof in the state. But even that scenario requires a massive build-out of offshore wind and a substantial increase in electricity imports from outside the region.

The results show that behind-the-meter solar is an important part of the region’s decarbonization toolbox, said David Ismay, a former state official who helped craft the Massachusetts study and now serves as a climate policy adviser at Gro Intelligence. But New England will need more than just distributed solar if it is to achieve its climate goals.

“If we don’t learn how to build things in New England, we will fail,” he said.