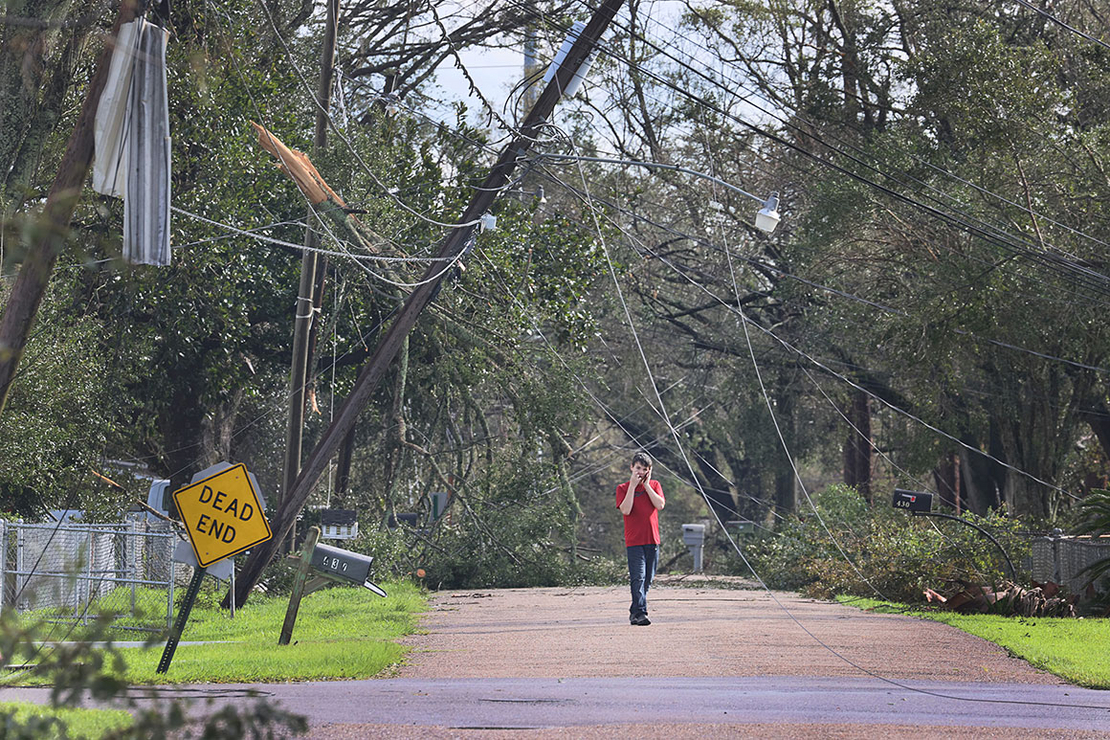 Power providers such as Entergy Corp. are assessing the situation, but there aren’t yet detailed answers as to why parts of the Louisiana grid crumpled when Ida arrived or when electricity may be restored to hard-hit areas. Some residents could be without power for weeks, and Entergy in particular is facing questions.

“We don’t just have a regular power blackout,” said Logan Burke, executive director of the New Orleans-based Alliance for Affordable Energy. “We have an information blackout. We’re not getting any information yet from this assessment that is underway.”

Burke, who evacuated to northern Alabama, said the lack of detailed information “makes it really difficult to say whether this particular situation was inevitable.”

More than 1 million homes and businesses still lacked electric service this morning in Louisiana, largely in the southeastern part of the state, according to PowerOutage.US. In Mississippi, the number of customers shown without grid power dropped to less than 60,000 from over 100,000 yesterday morning.

The website for Mississippi Power, which is part of Southern Co., shows trace outages in Gulfport and near the Louisiana-Mississippi line.

Some outages were reported in Alabama and Georgia as Ida’s rain and winds fanned out into other parts of the Southeast. No major damage in those states has been reported.

Restoration times can be hard to pin down after hurricanes and other major storms, and utilities often provide a wide window. But many Louisiana residents appear to be in for a long outage. The Department of Energy said nearly half of Louisiana customers lacked electricity as of 7 a.m. EDT today.

Entergy and its utilities have issued statements this week, but the company had not provided detailed answers to questions posed by E&E News in time for publication.

“Now that Hurricane Ida has moved out of the area, we’re conducting inspections of the system to get a clearer picture of what will be needed to repair the destruction,” Entergy New Orleans said today on Twitter. “Full damage assessment could take several days, as many areas are currently inaccessible.”

The storm follows past hurricanes — such as Gustav and Katrina — that left people in New Orleans without electricity for considerable periods. While each storm is different, promises from utility and political leaders to improve the grid didn’t create a system strong enough to withstand Ida. It made landfall as a Category 4 hurricane on Sunday.

Calls for future examinations or investigations are already taking shape.

Helena Moreno, president of the New Orleans City Council, was quoted in The Times-Picayune as saying a council committee that oversees Entergy would investigate. The City Council is the primary regulator of electric service provided by Entergy in New Orleans.

Craig Greene, chairman of the Louisiana Public Service Commission, said in a statement this week that while some power was coming back in parts of Baton Rouge, many people in the state might have to wait seven to 10 days, “with those nearer to the coast and New Orleans realistically looking at weeks.”

Greene said that for now, the focus in the state should be on helping neighbors.

“There will be a time and place to evaluate our electrical grid’s resilience, assess how the latest improvements have helped, and research how we might better prepare for the next storm,” he said.

‘A marathon, not a sprint’

President Biden addressed the severity of the power outages during briefings yesterday. The president met virtually with the governors and mayors of major cities in Louisiana and Mississippi and reinforced his administration’s commitment to restore electricity in heavily damaged areas.

“We’re in close contact with local electric providers to see what they need,” Biden said, noting that the major electric companies in those states are not government-owned. “But we’re doing all we can to minimize the amount of time it’s going to take to get power back up for everyone in the region," he said.

Included in a multiagency response is the Federal Aviation Administration, which is working with the state’s electric companies to authorize the use of surveillance drones to assess damage to the grid.

The Pentagon and the Department of Homeland Security are providing any satellite imagery that can help assess damage.

“Local utilities are going to soon begin restoration work, including prioritizing getting transmission lines into New Orleans and get them back up and running. A lot of them have been taken down,” Biden said yesterday.

He added later, “We’re about as prepared as we could be for the early stage of this, and there’s a lot more to do.”

Entergy described some of the damage in a statement yesterday, saying that major transmission lines that send power to several Louisiana parishes were out of service.

“Damage to eight high-voltage lines took out power for New Orleans and Jefferson, St. Bernard and Plaquemines parishes, as well as parts of St. Charles and Terrebonne parishes,” the company said. “One transmission tower near Avondale fell Sunday night, causing the tower’s conductor and wires to land in the Mississippi River.”

Deanna Rodriguez, president and CEO of Entergy New Orleans, said in a statement yesterday that the situation “will be a marathon, not a sprint.” She said it was too early to give approximate restoration times.

“We’re working as safely and quickly as we can, but recovery will vary depending on the damage incurred and its location,” Rodriguez said. “We must all be prepared for the recovery to take some time.”

Entergy’s Waterford 3 nuclear reactor remains shuttered but in a “safe, stable condition” as workers restore off-site power, a company spokesperson told E&E News in an email. Diesel generators have been powering essential systems at the plant since Sunday night.

Entergy disconnected the reactor from the grid Sunday morning as Ida’s winds escalated, and the company sequestered workers to be safe.

Crews are now clearing debris at the site, where the wind and water have damaged some non-nuclear structures, spokesperson Mike Bowling said.

It’s unclear when the Waterford reactor will be able to restart, as “the situation in southern Louisiana remains fluid,” Bowling said.

The River Bend nuclear site in Louisiana is still operating at 40 percent to comply with the Midcontinent Independent System Operator’s request to preserve grid integrity. Workers will return to the plant today.

Guggenheim Securities LLC said investors should be cautious about Entergy and Ida, though it noted that the company is no stranger to storm recovery.

“As a reminder, [Entergy] services territories have the regulatory construct (i.e., separate storm cost recovery filings and potential use of securitized debt) to account for these types of events, which tend to happen annually, along with several facets of the story that can be utilized to mitigate bill pressure from restoration efforts,” Guggenheim said in a note today.

Still, Louisiana residents don’t have certainty about the potential duration of outages in New Orleans and beyond. That’s true as hot weather descends on a region where many people currently lack electricity to operate home air conditioning or refrigerators. There also is the threat of death if people don’t use portable generators safely.

Burke noted past calls for Entergy to plan with resilience in mind. The Alliance for Affordable Energy has advocated for the use of distributed resources, solar plus storage and microgrids to address what people need after a storm. She said the system in place now isn’t what’s needed to keep people safe and healthy.

“We’ve continued to build the same system over and over,” Burke said. “And we cannot keep doing it.”

She said it is unclear, for example, how a new natural gas-fueled power plant fared through Ida. Her organization was among the opponents of building that facility. She said what is known is that the distribution and transmission systems aren’t working.

It also remains to be seen how any calls for burying transmission and distribution lines may unfold, as that can be much more expensive than traditional power lines. The impact of climate change also looms over decisions about making the grid more resilient.

Cleco, another Louisiana power provider, said in a statement yesterday that it’s working to restore electricity to critical infrastructure such as hospitals and water and sewage systems as it assesses damage caused by Ida.

“From there, we will move to the circuits with the largest number of customers until power is restored to all affected customers,” Clint Robichaux, manager of distribution operations support at Cleco, said in a statement.

Ida damaged parts of 14 transmission lines in Entergy Mississippi’s territory, which also affected several of the utility’s substations, spokesperson Mara Hartmann said in an email to E&E News. The electric company repaired seven of those lines, one each that connects to each substation, so it could start operating again. It is also repairing the remaining transmission lines today.

“Fortunately, they offer redundancy so this is not affecting our customers,” Hartmann said.

An Entergy substation that supplies electricity to Cooperative Energy’s customers remains down but should be repowered today, Hartmann said.

Electricity for residents may be the main worry after Ida, but other parts of the energy world are also having issues.

“The fuel supply shortages caused by Ida can be reduced by waiving the requirements to sell low volatility gasoline."

The waivers, which allow parties to “produce, sell and distribute winter gasoline” blends, will end on Sept. 16, the agency said.

Port facilities in New Orleans, Baton Rouge, Gramercy and Morgan City, La., remained closed, along with the port in Pascagoula, Miss., according to the Energy Department. The Louisiana Offshore Oil Port, which can load and unload deep-draft tankers, has been closed since Saturday.

More than 2 million barrels per day of refining capacity went offline due to the storm, according to investment bank Tudor Pickering Holt & Co., and oil and gas companies said they are still assessing damages at their Louisiana assets.

Royal Dutch Shell PLC said its Norco manufacturing site, which includes both refining and chemicals facilities, is without electrical power and some of its buildings are damaged.

“While the site remains safe and secure, we are experiencing elevated flaring,” Shell spokesperson Curtis Smith said in an email today. “We expect this to continue until power is restored.”

Smith added that “essential personnel” are on-site at plants in Geismar and Norco, La., to ensure safety and to “provide ongoing assessments of the storm’s impact.”

A spokesperson for Phillips 66 directed E&E News to the company’s website, which said yesterday that its Alliance refinery in Belle Chasse, La., is shut down and that there’s some water in the refinery.

A spokesperson for Valero Energy Corp. said the company is assessing its refineries in St. Charles and Meraux, La.

And Georgia-based Colonial Pipeline Co. said this morning that it had restored service on two lines that run from Houston to Greensboro, N.C.

The lines, which carry 3 million barrels a day of gasoline and other fuel and were shut down in advance of the hurricane, went back into service before midnight yesterday, the company said.

“After receiving clearance to enter the impacted areas, the crews followed rigorous procedures to inspect the infrastructure for integrity and completed all restart protocols,” Colonial said in a statement.

“Despite partial shutdown, fuel supply continued to be available throughout the southeast from the numerous terminals located along the supply route,” the company also said.

The impact on consumers is likely to be smaller than from previous storms, said Fernando Valle, senior oil and gas analyst at Bloomberg Intelligence. The largest refineries in the regions — Exxon’s Baton Rouge plant and Marathon’s Garyville complex — appear to have escaped major damage.

And the industry has invested in co-generation plants over the last few years, which makes refiners less dependent on grid power to restart their operations.

“Whenever you do some of those upgrades, you’re also trying to improve your resilience,” Valle said.

Lesley Clark contributed to this report.