Smell gas? Getting it fixed may depend on race and income 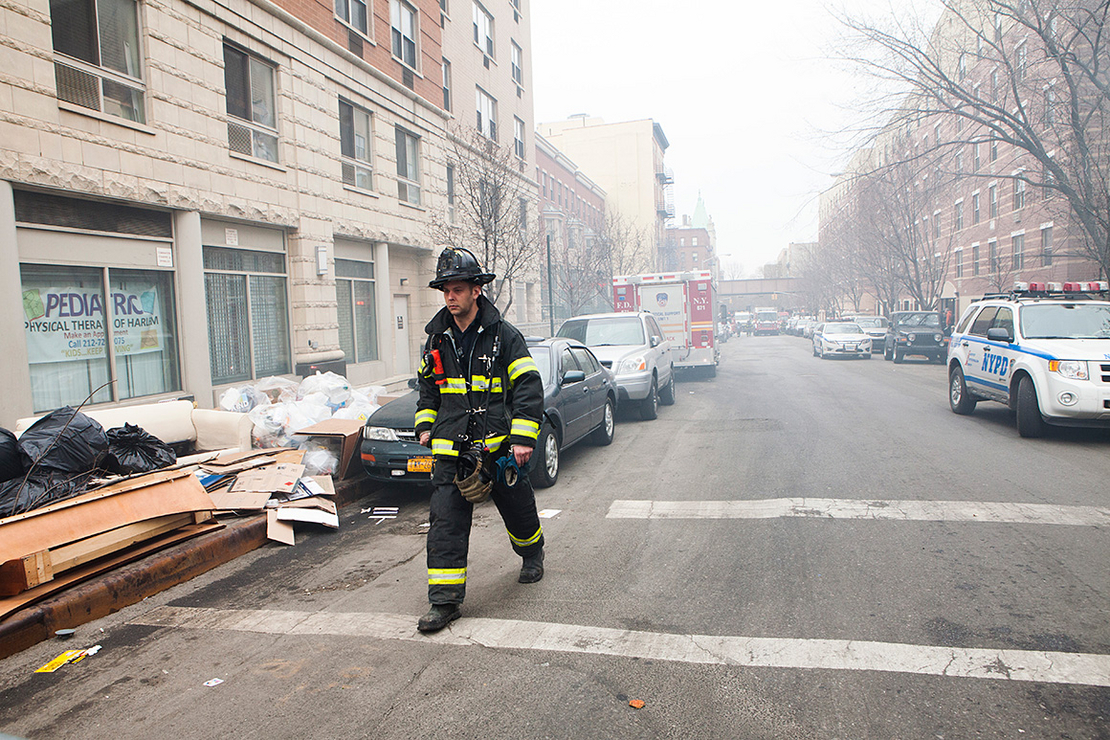 A firefighter walks near the scene of a gas leak explosion that caused two buildings to collapse in New York City in 2014. Unrepaired leaks can lead to fires, explosions and other hazards. Christopher Gregory/Getty Images

Auditors noticed a pattern three years ago as Massachusetts utility companies replaced leak-prone gas pipes in the wake of a natural gas explosion.

Crews seemed to be replacing more pipe in suburban areas, instead of in cities where the risk was greater.

There are potential reasons for that. Suburbanites might be more likely to complain about leaks. It’s cheaper and easier to cut through suburban lawns than city streets.

But the effect of that tendency, new research shows, is that minorities and people with low incomes are exposed to the dangers of gas leaks far more than white, richer people.

“You have people being treated differently,” said Marcos Luna, a geography professor at Salem State University, who studied the issue after fielding questions from community advocates. “Exposure and wait times are overwhelmingly disparate along the lines of race and income.”

Luna specializes in applying geospatial technology to issues of environmental justice — the concept that society should cease burdening disadvantaged communities with disproportionate amounts of pollution. He teamed up with Dominic Nicholas of Home Energy Efficiency Team (HEET), a nonprofit that tracks the integrity of the gas distribution system, to analyze Massachusetts’ uniquely detailed data on gas leaks.

Their first-of-its-kind analysis, published this year in the journal Energy Policy, found that Asian people and Black people experience the longest repair times for gas leaks, as do renters. For the most dangerous leaks, low-income people and those with less education face longer repair times than the general population.

Luna and Nicholas, who studies methane leaks as a director at HEET, didn’t reach conclusions about the reasons for the disparity and what it means for safety. But they say their findings should prompt policymakers and utilities to factor environmental justice into their oversight and planning.

They are also calling for more states and the federal government to collect more data about utility company leaks.

“Without it, we can’t hold utilities accountable,” Nicholas said.

“This could be a bigger problem,” he said. “What’s going on in places we don’t know about?”

Other researchers are asking similar questions.

Last year, a study from North Carolina State University found counties with more “socially vulnerable” populations have a higher concentration of the country’s sprawling network of natural gas transmission pipelines (Energywire, June 30, 2021). That suggests that the burdens of such pipelines — including pollution and safety concerns — fall disproportionately on those vulnerable groups.

Currently, the Pipeline and Hazardous Materials Safety Administration is looking at whether there are more accidents and incidents on gas distribution pipelines in disadvantaged communities, as part of the Biden administration’s focus on environmental justice.

The gas industry rejects any idea that companies prioritize their repairs by the race or wealth of those who live nearby.

“The safety of all customers and communities continues to be the top priority for natural gas utilities and any inference to the contrary is not based in fact,” said a spokesperson for the American Gas Association.

National Grid, the largest natural gas utility in the state, said it treats communities equally, regardless of race or socioeconomic status.

Utility regulators in Massachusetts say they have taken steps to ensure that leaks are addressed in an equitable way. The state’s sweeping 2021 climate law requires companies to focus on leak rates rather than simply leak-prone pipe. Leak rates are highest in “environmental justice” communities, according to the Massachusetts Department of Public Utilities.

An explosion — and then a discovery

One day in September 2018, emergency operators in the Merrimack Valley, north of Boston, got hundreds of calls reporting gas odors and house fires. A project to replace pipes had gone awry, over-pressurizing gas lines, pushing gas into homes, and causing explosions and fires. One person was killed and more than 15,000 people evacuated their homes for days (Energywire, Sept. 17, 2018).

In the explosion’s wake, the state utility agency commissioned a study of Massachusetts’ gas system. That’s when auditors noted that suburban lines were being replaced faster than urban ones.

The Energy Policy study offers more details into a similar disparity, focusing on the response rate to leaks that are often in lines under streets or away from homes and businesses. Luna and Nicolas did not look at emergency calls, and don’t claim that there’s any delay in response to emergencies.

But the disparities do raise safety concerns, said Bill Caram, executive director of the Pipeline Safety Trust, a safety advocacy group. He said the danger zone around distribution mains and service lines is often large enough that a blast on a street could reach businesses and residences.

“In many of the vulnerable communities identified in the study, there is often greater housing density,” Caram said, “putting many more people within that potential danger zone, compared to communities with less density.”

When gas utility companies discover leaks, they rate each leak by the likelihood that the gas could wind up in a confined space and create an explosion. That rating determines how quickly a leak is repaired or how frequently it is monitored.

Grade 1 leaks are the most dangerous. State law requires that companies fix them “as immediately as possible” and monitor them continuously until the repair is complete.

“By nature, it’s hazardous. You don’t ignore it,” said Richard Kuprewicz, a chemical engineer who worked for years in the industry and now consults on pipeline safety.

Leaks that aren’t hazardous yet, but could become hazardous, are classified as Grade 2. Companies must fix them within a year. Grade 3 leaks are ones not likely to become dangerous and are often intermittent. They must be reevaluated regularly.

It also found the white people and adults over 64 more often live in places with fewer leaks and where leak repairs are completed more quickly.

“For all leak classes combined, People of Color (especially Blacks and Asians) and renters experience the longest repair times,” the study states. “In general, People of Color (especially people who identify racially as Asian or Black), limited English speaking households, lower income persons, renters, and adults with lower levels of education live in neighborhoods or areas with higher leak densities, even when controlling for housing density.”

Luna and Nicholas didn’t study why the problems are worse in those neighborhoods. They’re hoping that more research will delve into that.

But Luna offered a theory: “squeaky wheel syndrome.” That’s the idea that people with more money and education are more likely to complain because they’re willing to engage with a bureaucracy like a gas company to get problems fixed.

Another possibility is simply that it’s easier and cheaper to replace pipe in suburban areas than urban areas. Cutting across suburban lawns takes less time than digging into the labyrinth of pipes and wires under city streets and sidewalks. The Massachusetts auditors who noted the discrepancy between urban and suburban repairs reported that crews could replace about 10 times more pipe in a day in the suburbs than they could in places like downtown Boston.

Luna and Nicholas note in their study that beyond posing a safety hazard, the maintenance disparities could leave a shrinking pool of low-income people shouldering the financial burden of maintaining an aging gas distribution system, as wealthier neighborhoods shift to cleaner and more sustainable energy.

“The transition toward sustainable energy sources is happening most rapidly amongst wealthier households, especially homeowners,” the study states.

‘The rest of the country is a black hole’

Massachusetts is home to one of the oldest gas distribution systems in the country. The system reflects its age: The state has more than 6,000 miles of aging, leak-prone gas infrastructure, according to HEET.

While about 6 percent of the nation’s gas mains are made of leak-prone pipe, that number is 22 percent in Massachusetts, according to PHMSA data cited in the Energy Policy study. Fourteen percent of Massachusetts’ gas mains were installed before World War II.

Still, the Bay State doesn’t lead the nation in leak-prone pipe. Both Rhode Island and the District of Columbia have a higher percentage. Several larger states, like California and Texas, have more miles of leak-prone pipes.

But the Bay State does have some of the best data about where leaks occur. Massachusetts officials are the only ones to require precise details about where leaks are found. Scott, the Colorado State professor, said “it’s a really impressive data set.”

The level of detail allowed Nicholas and Luna to look at areas as small as a city block.

In other places, data is more likely to be sorted by utilities or city or county boundaries. That makes it difficult to look at different neighborhoods, if not impossible.

With more detail, the authors say researchers could find out which other states have the same disparities.

“You could look in other communities and you might find something similar or even worse,” Luna said. Right now, “the rest of the country is a black hole.”