Smiles and margaritas as staff hears Pruitt’s out 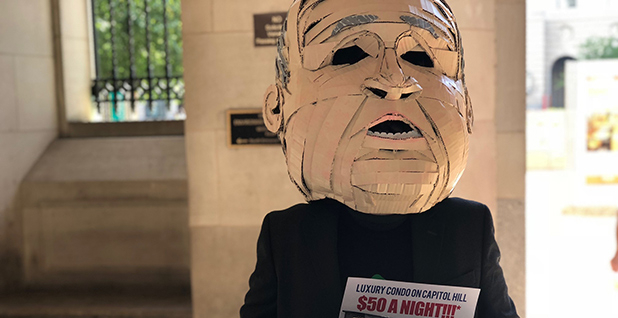 EPA staffers walked out of headquarters yesterday afternoon wearing quiet smiles — and, for those who hadn’t checked Twitter, the occasional look of surprise.

About an hour after President Trump tweeted that he had accepted the resignation of Administrator Scott Pruitt, some staffers were just hearing about their ousted boss from activists and reporters gathered outside their building.

"That’s news to me," one employee said, raising her eyebrows and chuckling. Agency leadership didn’t email staff about the change until 6:46 p.m., roughly three hours after Trump’s tweet. Most people had already left work.

Deputy Administrator Andrew Wheeler told employees that he will be acting chief for the agency starting Monday. He thanked Pruitt for his service and said he was "humbled and honored to take on this new responsibility" at EPA, where he started his career 25 years ago.

Before Wheeler’s email, word traveled across some offices as a whisper. A few employees said the building was pretty quiet because people were out for the holiday. An EPA intern suggested some were keeping mum for fear of "the wrong person" overhearing. Others described it as "very openly celebratory for the two dozen people who were actually at work today."

One career employee said that "people were running around the halls, walking into people’s offices saying, ‘Did you see, did you see?’"

Another EPA employee said people were "screaming and hollering" when they got the news. A third staffer described a colleague rushing into the office with "phone in hand like Berlin had just been invaded."

A longtime employee said she was on the phone when the news broke. Four people had gathered around her door by the time she hung up, and she feared there had been another mass shooting. When they instead told her that Pruitt was out, she was thrilled. And when she left the office, she laughed at the scene outside.

Near the exit, an activist dressed as Pruitt shuffled around carrying a box of belongings, as if he’d just been fired. He asked passers-by if they knew directions to the American Petroleum Institute — or maybe the nearest Chick-fil-A.

A few EPA staffers snapped pictures of him. One employee walked by and said, "Don’t let the door hit you on the way out."

Most employees declined to give their names for fear of retaliation, and many didn’t comment at all. But a few couldn’t help themselves. After silently walking past a reporter, one employee turned back, threw up her hands and said, "I’m smiling!"

Along with Pruitt’s ties to industry, employees said his behavior — and the numerous investigations into potential ethics violations — had been too much.

"It’s a good signal that, in the end, ethics matter," one employee said.

Joe Edgell, president of the National Treasury Employees Union Chapter 280, which represents EPA employees in headquarters, said staffers were "thrilled" to see Pruitt leave because "they felt like there was a double standard — one for their behavior — one for Mr. Pruitt’s."

"That no longer exists," Edgell said in an email.

Another EPA employee told of enjoying a celebratory margarita yesterday evening after news of Pruitt’s resignation.

"Relief, justice finally being served, some cheers, some disbelief because we had given up hope," said the employee. "Politics aside, Pruitt was a self-serving bad actor and a disgraceful public servant. Patience paid off."

A few staffers were already thinking about Wheeler. His background as a lobbyist for the coal giant Murray Energy Corp. already has some employees suspicious.

"The proverbial fox hasn’t left the henhouse," Morrison said in a statement. "Pruitt’s blatant disregard for life-saving regulations mustn’t be the standard for his successor, a former coal lobbyist at EPA, Deputy Administrator Andrew Wheeler."

An agency employee who gave his name as Lance said, "The acting guy’s a coal lobbyist, but I don’t think he’s as crazy as Pruitt." He added, "Pruitt’s religious belief system was unbelievable."

Pruitt, a Southern Baptist and former deacon, and Energy Secretary Rick Perry attend Bible study sessions led by a conservative pastor who has said God put man in a "superior position" to the rest of creation and that the Earth exists to serve mankind (Climatewire, March 28).

One EPA staffer said not many of them knew or had advance knowledge of Pruitt’s coming departure, noting some initial "sadness and shock."

"But at the end of the day, [we] still have jobs to do under the president and Andrew," said the staffer.

The activists outside were turning their thoughts to Wheeler, too. Lukas Ross, the Friends of the Earth activist dressed like Pruitt, said they might flip the oversized head and fill it with candy.

But making a replacement might be tricky; Wheeler’s head looks harder to mimic, he said.