Smith out, Vela in as NPS acting director 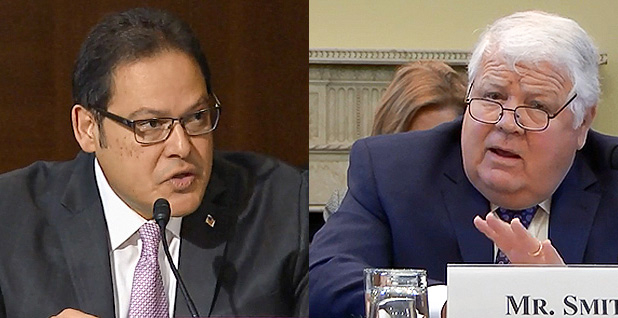 P. Daniel Smith is leaving his position as acting director of the National Park Service and will be replaced by David Vela, the former superintendent of Grand Teton National Park in Wyoming, according to sources.

President Trump chose Vela for the top job last year, but his nomination was never confirmed by the Senate. He joined the NPS Washington office anyway and has been working closely with Smith as the agency’s acting deputy director of operations.

Smith’s departure came as no surprise; he had told colleagues weeks ago that he would depart soon.

The park service and Interior Department both declined to comment this morning.

The Senate Energy and Natural Resources Committee voted overwhelmingly to advance Vela’s nomination in 2018, but the Senate declined to take a vote. When a new Congress convened in January, Trump would have had to renominate Vela to keep him in the running, but that never happened.

Vela, a Texas native, described himself as the oldest grandchild of a sharecropper at his confirmation hearing. He told lawmakers one of his top goals would be to end "the scourge of sexual and workplace harassment" in the park service.

Vela has a long track record with the park service, having worked in other positions as the agency’s associate director for workforce and inclusion; the director of the NPS Southeast region; and superintendent of the George Washington Memorial Parkway, Palo Alto Battlefield National Historic Site and Lyndon B. Johnson National Historical Park.

Smith was a controversial figure from the beginning.

In 2004, he helped Washington Redskins owner Daniel Snyder in his bid to cut down more than 130 trees on an NPS-protected easement near Snyder’s property so he could get a better view of the Potomac River.

The Interior Department’s Office of Inspector General said that Smith, who worked as a special assistant to then-NPS Director Fran Mainella, had "unduly influenced" deliberations with officials at the Chesapeake & Ohio Canal National Historical Park "by inserting himself in the process through personal communications" with Snyder, Snyder’s attorneys and park officials.

Last year, Smith apologized for behavior that was "inappropriate to the workplace" after an investigation concluded that a crude gesture he made during a hallway conversation did not constitute harassment.

This year, Smith defended the agency’s use of entry and recreation fees to pay for basic services during the partial government shutdown, a move that angered many congressional Democrats.