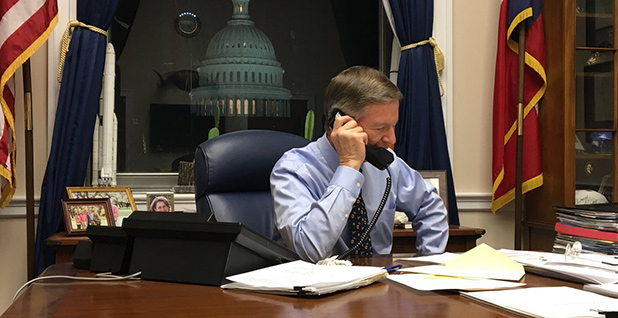 In early January, EPA chief Scott Pruitt met with Rep. Lamar Smith (R-Texas), chairman of the House Science, Space and Technology Committee, to discuss one of Smith’s pet projects — overhauling how EPA uses science. Smith hasn’t been able to get legislation to do so through Congress, so he pitched Pruitt to do so internally, according to emails obtained through a Freedom of Information Act request. The emails were obtained by the Union of Concerned Scientists and shared with E&E News.

EPA has said little about its plans to make science more transparent, other than Pruitt’s brief interview with a conservative news outlet to say the plan was coming at some point.

The new emails reveal how Pruitt’s staffers have worked behind the scenes with Smith’s office.

On Jan. 16, a few days after Pruitt met with Smith at EPA headquarters, a Smith staffer followed up with Pruitt’s shop.

"It was great to see you last week and appreciate the Administrator’s time. Chairman Smith is very keen for our staff to get together to discuss further transparent science-based regulations at the EPA," Smith’s aide Joe Brazauskas wrote to EPA congressional affairs staffer Aaron Ringel. "We can meet at your earliest convenience with the appropriate EPA staff to discuss this matter further."

Within an hour of receiving Brazauskas’ email, Ringel circulated the message to colleagues at EPA.

"All, see below follow up from Chairman Smith’s meeting with the administrator," he wrote. "Want to check on who would be the most appropriate [for] them to speak to. In short, this is in regards to his pitch that EPA internally implement the HONEST Act (no regulation can go into effect unless the scientific data is publicly available for review)."

One of the aides copied on Ringel’s email was Richard Yamada, the deputy assistant administrator of EPA’s Office of Research and Development. Yamada previously worked for years on the Republican staff of the House Science Committee led by Smith.

Brittany Bolen, who works in EPA’s policy office, sent an email dated Feb. 12 saying that Pruitt’s chief of staff Ryan Jackson "asked to have this rolled out by the end of the month."

The Union of Concerned Scientists said the emails show the plan was crafted by political staff with little input from scientists. They also show that EPA’s political appointees are mostly concerned about industry, rather than environmental or health protections, said USC spokesman Yogin Kothari.

"This idea to restrict the use of science at EPA was hatched solely and worked on almost exclusively by political appointees who are doing everything they can to ensure that independent science doesn’t get in the way of policy decisions at the agency," he said. "It’s an effort to stack the deck in favor of industry that EPA is supposed to regulate."

‘This directive needs to be revised’

Nancy Beck, deputy assistant administrator of EPA’s chemicals office, raised pointed concerns about what a secret science policy would mean for both pesticide registration and for chemical companies and regulating chemicals under the Toxic Substances Control Act (TSCA).

Beck noted that under EPA regulations, pesticide registration requires companies to submit studies that include a "huge amount of data" and cost the companies millions of dollars to conduct. "Guideline studies of this type are never put in journal publications — there is no audience for them, thus in IARC’s eyes they are not published," she wrote.

The World Health Organization’s International Agency for Research on Cancer, or IARC, develops an international database of chemicals that could potentially cause cancer. Beck notes that most of the data in this process are considered confidential business information, but the "CBI" tag can be waived to make the data available in many instances.

Beck added that there would be a similar problem under TSCA, where data for many existing chemicals aren’t published because there is "no incentive for anyone, anywhere to publish them."

"Yes, thanks this is helpful — didn’t know about the intricacies of CBI — ok, we will need to thread this one real tight! Thanks Nancy!" Yamada wrote in response to Beck’s warning.

Richard Denison, a senior scientist at the Environmental Defense Fund, noted that EPA staff and members of Congress had previously objected to Smith’s "Honest and Open New EPA Science Treatment Act" — the basis for the potential EPA policy — for the data collection burden it would put on researchers, who would have to go back and identify which data could be made public.

"What Nancy Beck is ironically pointing to is the same set of issues would fall on the industry, because it is not only whether the information would be made public or not, it’s the cost and burden associated with doing so," Denison said.

EPA spokeswoman Bowman did not comment on whether EPA planned to follow Beck’s suggestion to revise its proposal. "It’s important to understand, however, that any standards for protecting CBI would be the same for all stakeholders," she said.

"This data has to be somewhere, and if someone needs to see it then arrangements have to be made," said Steve Milloy, former EPA transition team member. "You can’t attack this stuff with a broad brush."

In another email from March, months after the process had started, Beck found a passage from documents the agency’s pesticide program released in December 2016 saying EPA "does not believe that it is appropriate to refuse to consider published studies in the absence of the underlying data."

Beck wrote in the email, "I’m sharing for awareness, particularly regarding court cases that are cited."