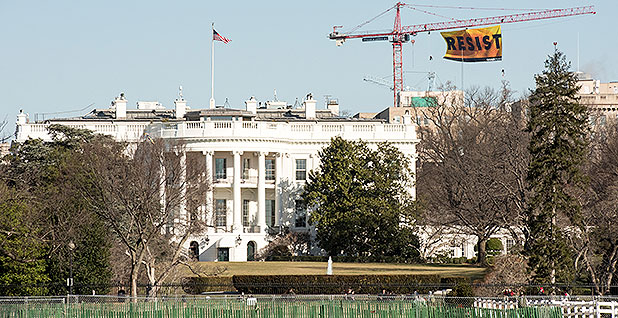 Greenpeace activists deploy a banner on a construction crane near the White House reading "RESIST" on President Trump's fifth day in office. Photo courtesy of Greenpeace.

The Trump resistance is in full swing.

Feeling under fire from the new administration, federal workers, greens and former Obama officials are mounting their opposition movement using social media, leaks to the press, protests and other tactics — like illegally scaling construction equipment to hang an anti-Trump banner near the White House. President Trump and his team have been in office less than a week.

Trump’s campaign rhetoric and early actions perceived as hostile to federal workers and climate change policies — combined with a new era in social media — have sparked an unprecedented backlash from the left during the first days of his presidency.

"I expect more of this," said Eric Schaeffer, executive director of the Environmental Integrity Project, who resigned from U.S. EPA in 2002 in protest of the George W. Bush administration’s environmental policies.

"They came in stomping with very heavy boots … determined to make the federal workforce the enemy," Schaeffer said of Trump and his team. "You get what you pay for."

The online backlash was already underway during Trump’s first day in office.

The National Park Service’s Twitter account retweeted a story about how climate change and civil rights issues had been scrubbed from the White House website, then retweeted images showing bigger crowds at President Obama’s inauguration in 2009 compared with Trump’s inauguration last week. The Interior Department suspended all Twitter activity for about 12 hours in response and deleted the tweets.

Yesterday, Death Valley National Park shared on social media images of Japanese-American internees on the same day Trump announced several hard-line actions on immigration, including his border wall. A spokeswoman for the park denied the tweets were in protest of Trump, according to The Wrap.

Badlands National Park posted a series of tweets on climate change that went viral and sparked debate over whether the park was defying the Trump administration. A National Park Service spokesman said the tweets "were posted by a former employee who was not currently authorized to use the park’s account" (E&E News PM, Jan. 24).

The account, which claims to be "The Unofficial #Resistance team of U.S. National Park Service," has been firing off posts critical of Trump. One post said, "Trump knows climate change is real, he just doesn’t care. For deniers, ignoring these worries is more profitable. Why worry when you’re 70?"

The Twitter account had amassed more than 1 million followers by publication time. The account tweeted this morning that it would be handed off to people "outside of government employment for the sake of our colleagues" and that activists and journalists would be taking the reins due to "the pressure" it put on NPS employees.

An unofficial EPA account has cropped up, too, @ActualEPAFacts.

That account, launched yesterday, says, "He can take our official Twitter but he’ll never take our FREEDOM. UNOFFICIALLY resisting."

It claims to be run by "three EPA employees and a writer." It now has more than 90,000 followers and climbing.

The White House has pushed back against claims that it’s been driving a social media crackdown at federal agencies.

"They haven’t been directed by us to do anything," Trump spokesman Sean Spicer said of new restrictions in place. "From what I understand," he added, staffers "have been told within their agencies to adhere to their own policies, but that directive did not come from here" (E&E News PM, Jan. 25).

Asked whether EPA employees were moving more and more toward resisting the Trump administration, John O’Grady, president of the American Federation of Government Employees Council 238, said, "It kind of sounds like it."

AFGE Council 238 represents several local EPA unions across the country. O’Grady said if the sour mood among employees persists, there could be more leaks to the press.

"I’m going to guess what was going on during the Reagan years when people started leaking to the press because they were worried about the agency being dismantled," O’Grady said. "Today, we have social media. We get it out there real quick. We didn’t have emails in the Reagan years. Faxes were a big deal then."

Greenpeace activists yesterday deployed a huge banner in Washington reading, "RESIST." The banner, which was visible above the White House from some locations, was hung by activists who scaled a crane, an act that D.C. police called "dangerous and unlawful."

Pearl Robinson, one of the activists who unfurled the banner, said in a statement yesterday, "The sun has risen this morning on a new America, but it isn’t Donald Trump’s."

Christine Todd Whitman, Bush’s first EPA chief, said the backlash she’s seeing is much stronger than when she came into office in 2001.

"Environmentalists weren’t happy; the Democrats said, ‘Watch out, we’re going to be watching,’" she said. But "it was nothing like this that I remember."

The new Trump team is "sparking a backlash that they could have avoided easily," Whitman said. "They’ve basically declared war on the agency. They want to get rid of it, and they’re playing with public health, human health, and that’s a dangerous thing."

She doesn’t expect it to stop anytime soon.

EPA staff and others "are just not going to sit back," she said. "And if they really continue with this — we’re going to take down the science we don’t like, if we’re going to not let people talk about climate change — you’re going to see more of it coming out."

Tom Reynolds, who directed EPA communications under Obama, posted a response to a report about federal workers pushing back against the Trump administration.

"The EPA career staff are committed to the mission. They won’t stand for rollbacks of progress made reducing pollution. They’ll fight dirty," Reynolds wrote.

Liz Purchia, another former EPA communications director under Obama, said the way the Trump EPA "has started off has put them in a bad spot."

Former government officials warn there could be consequences if the new administration continues to irk the federal workforce.

"They are not trying to work with the staff who should be respected. … It shows an inability to understand the important relationship you need to have with the career staff," Purchia said. "What we have seen from the different Twitter accounts to the leaking to the press, we are seeing career staff speaking out and be a voice for the agency that they believe in and work for."

Schaeffer of the Environmental Integrity Project likewise said, "You need their support." That includes, for example, having career agency employees who can offer sound advice about what actions are legal, he added. "You end up kind of walking into meat grinders if you don’t have people telling you what to do, what to look for."

Whitman said that although the outrage may not affect the administration’s policies, "it certainly will affect the thinking of the Congress if they see outrage. … [Trump is] going to need money for all of this stuff."

Meanwhile, environmental journalists are protesting the new administration’s moves to halt some external communications in agencies.

At EPA, for example, staffers were told to stop social media activity and were instructed that incoming media requests would be carefully screened.

"Any federal government public information lockdown is an affront to both the spirit of the Freedom of Information Act and the public trust," Society of Environmental Journalists President Bobby Magill said yesterday in a letter to Trump and his press secretary Spicer.

Magill said SEJ rejects the "gag order" on agencies and urged the administration to maintain public access to scientific information about climate change and other environmental issues that was available on government websites prior to Inauguration Day.

Democrats have also complained about the communications lockdown at EPA and other agencies. Twelve senators in the Democratic caucus, including Ed Markey (D-Mass.), Elizabeth Warren (D-Mass.) and Bernie Sanders (I-Vt.), sent a letter yesterday to Trump asking him to reverse the orders.

"The American people expect an open, transparent and honest government, and your actions are not only contrary to that expectation, they promote a long lasting culture of fear among federal employees and prevent them from following their mission to openly serve the American public," said the senators.

Other Democrats have put out the call for federal employees to blow the whistle on what’s happening inside their agencies.

"Any federal employee who wants to visit, we will listen," said Sen. Claire McCaskill (D-Mo.) on social media. McCaskill is the ranking member on the Senate Homeland Security and Governmental Affairs Committee, which investigates waste and fraud in the federal government.

Rep. Elijah Cummings (D-Md.), ranking member on the House Oversight and Government Reform Committee, said on MSNBC’s "Morning Joe" yesterday that he would protect government workers who came to his panel.

"Call me. I want to talk to you," Cummings said.