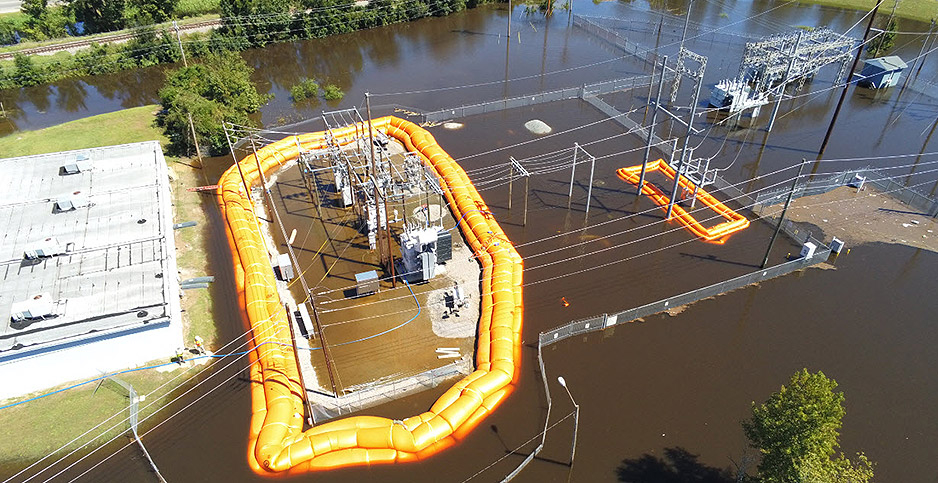 When a disaster like Hurricane Florence strikes, that’s often the answer from transmission experts when asked how long before electricity is restored to a substation affected by catastrophic flooding.

"The biggest challenge with substations flooding is not that we expect to operate them during flooding conditions; the problem really is recovery afterward — to see how quickly we can get them back online," said Andrew Phillips, vice president of transmission and distribution at the Electric Power Research Institute.

Florence was a Category 4 storm at its peak, packing 130 mph winds two days before making landfall in North Carolina and South Carolina on Sept. 14.

More than 2 million customers lost power in North Carolina, where rain caused record flooding as the storm lingered over the state for days.

While the task of replacing downed poles and power lines can begin almost immediately, assessing the damage to electricity substations that anchor the power grid requires water to recede.

Nevertheless, most utility customers had their electric service back one week after Florence hit. It was a testament to the well-orchestrated mutual aid restoration efforts of roughly 40,000 utility workers from in and out of state and the fact that the state’s power companies have been spending money on projects to provide redundancy to the grid and enhance reliability.

That redundancy allowed utilities to work around the substations most damaged by floodwaters.

Duke Energy Corp., the dominant provider in North Carolina, had 1.8 million customers out at the peak, said Nelson Peeler, Duke’s chief transmission officer. "Everyone who is able to take service has service," Peeler said. Fewer than 2,000 customers are without power now, he added, in large part because of persistent flooding and severe damage.

The bulk electric system is "very robust and very redundant and is generally restored very quickly," Peeler said. "As you move down closer to the homes and into lower voltages, there’s less redundancy," he said, and restoration becomes more of a challenge.

"During the height of the storm, we had nine substations that were impacted by flooding," he said.

They were de-energized before the flooding or actually flooded. Seven are still either out of service or being repaired, he said. Two of them have been fully restored.

"We’re serving all the load from those seven either by rerouting the feeds from somewhere else — we have a very redundant, resilient design," Peeler said. "A few of the stations required temporary installations, so we have portable substations that we can install."

Four of seven are expected to be back in operation "fairly quickly" as they suffered limited damage. "We de-energized them before water got up into a lot of our sensitive equipment," Peeler said.

The rest could require significant work and take up to six months to fix, he said, perhaps requiring changes to the substation’s architecture or moving it to a new location.

Transformers and circuit breaker are "designed to be out in the elements," said EPRI’s Phillips. It’s other substation components that cause a problem during a flood.

"The things that are sensitive are mostly the electronics and the mechanisms. So if we can raise relays and batteries and control houses and those things up out of the water, some of the equipment can withstand the flooding," Peeler said.

Duke has consulted with Entergy Corp., whose utilities in Louisiana and Texas saw their electric service devastated by Hurricanes Katrina and Harvey in 2005 and 2017, respectively.

"It was an effective thing for us; we saved a number of stations that would have flooded had we not been able to put those out ahead of time," said Duke’s Peeler.

Because of the extensive damage to its grid from Katrina and Harvey, Entergy opted to elevate critical elements such as the control houses that host sensitive electronics.

Duke, likewise, may do that as well at some sites, Peeler said.

"It looks a lot like a beach house up on stilts," he quipped.

Unlike other grid technologies, substation architecture has not advanced much in recent decades. Most substations are known as air-insulated substations where components are visible in the open, EPRI’s Phillips explained.

In 1965, Canada’s ABB rolled out the first gas-insulated (GIS) substation, where high-voltage components are encapsulated and insulated by sulfur hexafluoride gas to protect key elements. They are less prevalent and more expensive than air-insulated substations.

That is why the most common solution to a flooded substation is to "lift it up" to a height where a recurrence is unlikely, Phillips said.

At North Carolina’s electric cooperatives, the restoration proceeded roughly along the same timetable as Duke’s, although many more substations were affected.

That is because 26 separate cooperatives service 2.5 million customers all across the state.

At the storm’s peak, about 326,000 co-op customers were without power. Now that is down to fewer than 1,200, said John Lemire, director of transmission resources at North Carolina Electric Membership Corp., which provides power to the co-ops.

The co-ops saw 55 of their primary substations affected by flooding. But counting smaller stations, about 150 were out of service at some time during the storm.

"Water and electricity don’t mix. Substations have a lot of exterior wiring that is suitable for wet locations," Lemire said. "But what you’re worried about is when the flooding reaches [a height] where you’ve got exposed wiring that makes connections with the relays or when it gets to the energized equipment or your breakers or transformers."

As wrenching as the experience was with Harvey when more than 300,000 customers lost power, it provided a utility like Entergy the "opportunity for improvements on how we prepare and respond to future storms such as Harvey," Gallagher said.

"These strategies are incorporated into future grid enhancements, whether it is replacing existing infrastructure due to maintenance or constructing new facilities to accommodate new customers, all of which enhances reliability," he said.

Correction: A previous version of this story included an incorrect title for Andrew Phillips of the Electric Power Research Institute.