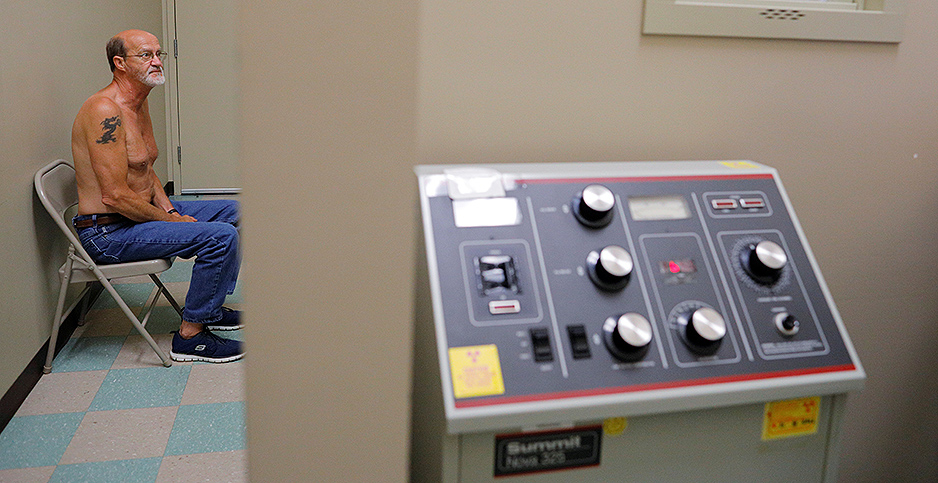 No studies have been done specifically linking black lung to increased risk of COVID-19 symptoms, but Dr. Leonard Go of the University of Illinois at Chicago’s Black Lung Center of Excellence said it’s not a leap to draw such a conclusion.

"Anytime I’m out, I always carry hand sanitizer. All my vehicles have it. The first thing I do when I get in my vehicle … is use the hand sanitizer," Johnson said. "Always have."

It has "one room that they call ICU, basically, and it’s really not contained like the one in Charleston," Hager said.

The Black Lung Center of Excellence serves as a resource for respiratory clinics that specialize in treating black lung patients. The center’s advice to those clinics is to stop elective visits.

"We don’t want people with black lung who are otherwise healthy to come into an environment where they may be exposed to someone with COVID-19," Go said.

The United Mine Workers of America, the leading coal labor union, also believes coal mining is an essential industry. But the union is not satisfied with the Mine Safety and Health Administration’s efforts to protect miners during the pandemic.

"There is no government response," union spokesperson Phil Smith said last week. "All MSHA has done is say, ‘Look at what CDC is saying, look at what [Occupational Safety and Health Administration] is saying and do that.’"

A spokesperson for MSHA pointed to its COVID-19 webpage that suggests mine operators take many of those precautions. But the agency hasn’t issued the "emergency standard" that Roberts said will make sure mine operators comply with the measures.

If Johnson were still working in the mines, he said he’s not sure if he’d be willing to risk going to work during the pandemic.

"As a younger man, like most young men do, I had a 10-feet-tall and bulletproof attitude so I don’t know that I wouldn’t be right out there," he said. "But not the old man I am today."

The National Mining Association, as part of its plea to be declared an essential industry, asked Congress and the Trump administration to cut the tax because it says the industry can’t afford to pay the current levels.

"At a time when your cases, or the prevalence of black lung, is surging, you want to cut the black lung excise tax? That doesn’t make sense," said Aysha Bodenhamer, a sociology professor at Radford University in Virginia who studies coal mining and black lung.

"I’m just afraid," he said, "that in all the chaos and the push that momentum is going to die and fall to the wayside and folks are going to be lost in the shuffle."