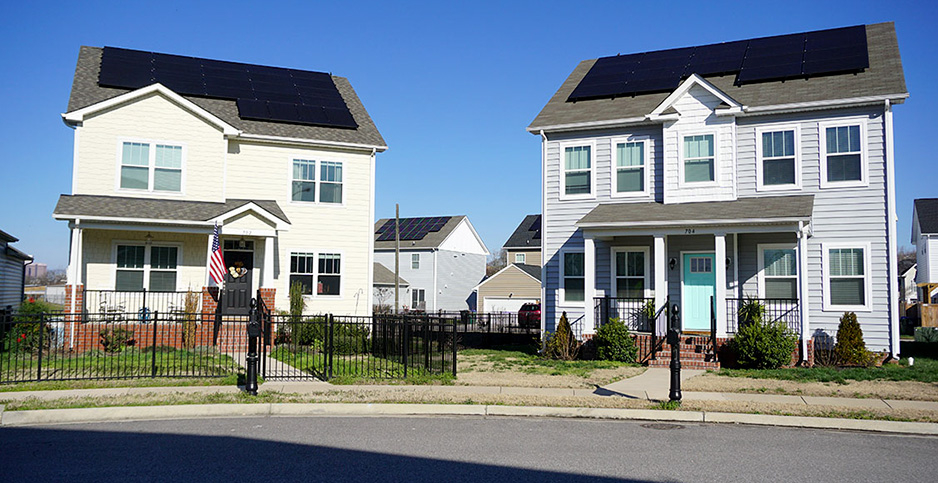 Seeing residential solar systems like these on homes in Richmond, Va., may be the biggest predictor of adopting the renewable energy resource — an effect that could help policymakers bring solar to new, less wealthy areas, according to new studies. Jeffrey Knight/VCU Capital News Service/Flickr

Two new studies, including one funded by the Energy Department, are building a case for residential solar to become part of the toolbox for environmental justice.

Low- and moderate-income households make up over 40% of the U.S. public, by some estimates. Residential solar companies generally regard that slice of market share as out of reach, given the high cost of rooftop systems and low rates of homeownership among the demographic.

But a study published last week in Scientific Reports hints at one key to unlocking solar for that segment. Living within view of a neighbor with solar panels, it found, is the greatest single predictor of panel adoption — more than any socioeconomic factor — and the "contagiousness" of solar is particularly pronounced in lower-income areas.

"The takeaway is that, with economic incentives, you can actually seed a region with solar panels, which will then lead to more solar panels," said Anders Levermann, a co-author and researcher at Germany’s Potsdam Institute for Climate Impact Research as well as Columbia University.

Yet as penetration levels increase, property owners with less disposable income might become "increasingly important," said White. "I do think serving that part of the country’s going to be crucial if we’re trying to hit climate goals, and trying to green the grid."

The second DOE-funded report, published today by the nonprofit Clean Energy States Alliance, argues that policymakers should target a previously ignored segment of the public — those who live in "manufactured homes," or mobile homes.

That kind of housing stock is called home by 6% of the U.S. population, a proportion that rises as high as 17% depending on the state. A disproportionate share of people who live in them have low or moderate incomes and often have a hard time paying their bills. They also tend to live in rural areas.

Rooftop solar initiatives that target this demographic may fit within the "environmental justice" rubric, argues CESA, even though exposure to heavy pollution and racial discrimination may not figure as key justifications. About 81% of residents of manufactured homes self-identify as white.

Policymakers should start targeting ways to "seed" this section of the public, introducing solar to previously untapped areas and allowing it to spread, said Warren Leon, CESA’s executive director.

"That concept works anywhere. And it’s a powerful one," he said of solar’s "contagiousness." For residents of manufactured houses, that tendency for residents to mirror the actions of their neighbors might be especially true, he added. Typically, those residents own their home. In many cases, they’re sited close to other such houses.

"The ability for ideas to spread through that community may be even easier than in other, more dispersed communities," said Leon.

Leon’s group also found, based on a survey of 170 residents, that most households were unfamiliar with residential solar as a technology.

"If the solar industry isn’t active in those communities, they haven’t already started the process whereby you get that contagious reaction. You just need to start it and nurture it, and then it starts building momentum," he said.

Setting off that reaction, though, might not be so easily accomplished. Apart from the obvious cost barriers involved with solar systems, many manufactured homes can’t easily support rooftop panels. States and utilities would need to implement incentives that trim solar panel costs to an affordable level, while making them available for a variety of siting strategies, varying from ground-mounted types to community solar arrays, wrote CESA.

"This is a segment of the market that has really been underexplored and ignored," said Leon. Targeting it for residential adoption could relieve the need for large-scale projects on rural lands and democratize solar power — an advantage both reputationally and for the industry’s bottom line. "It doesn’t leave anybody on the outside looking in," he said.

The report was based on original research from CESA and funded by DOE’s Solar Energy Technologies Office. It also was overseen by an advisory committee that included the National Renewable Energy Laboratory and trade groups from the solar and manufactured-homes industries.

The report cited earlier research, led by Yale University economist Ken Gillingham, that supported the notion of rooftop solar’s "contagiousness" across a wider swath of the U.S. The Scientific Reports study, by contrast, focused on the California city of Fresno.

In an email to E&E News, Gillingham said he was interested in the Scientific Reports study’s finding that solar’s contagion effect is more pronounced for lower-income households.

"I haven’t found that more broadly when looking across larger geographies than a city. But perhaps there are other cities like Fresno, which would be an intriguing finding," he wrote.