Solar Impulse 2 pilot: ‘We are at the limit of the technology’ 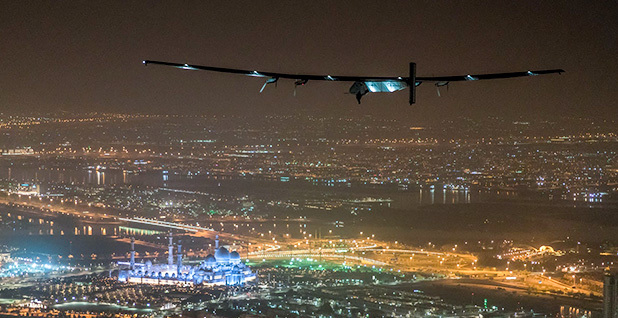 The sunlight-powered journey around the world ended in the dark as pilot Bertrand Piccard landed the Solar Impulse 2 aircraft at 4:05 a.m. local time on July 26 in Abu Dhabi, United Arab Emirates.

Chased by ground crew members in cars and on bicycles, the aircraft seemed to hang in the air before it touched down at what looked like an impossibly slow speed on stilt-like landing gear, its four humming electric motors easily drowned out by drums and horns from the welcome band.

Piccard, the project’s founder and chairman, and André Borschberg, its CEO and co-founder, took turns at the stick inside the aircraft’s cramped, unpressurized single-seat, 3.8-cubic meter cockpit. Temperatures swung from minus 7 degrees Fahrenheit at altitude to 95 degrees over the desert.

But the pilots still looked forward to strapping in.

"Boarding the aircraft was a privilege," Borschberg said. "The mindset I had was extremely positive."

The trip fulfilled a 16-year-old ambition to fly around the world without fuel, and the project team hopes it will drive the world to set more ambitious targets for clean energy and emissions reductions. The $170 million Solar Impulse initiative culminated in this 17-leg journey around the world, traveling 43,000 kilometers over 23 days of flight time.

However, the aviation sector will need more than a sunny disposition to follow its lead in clean flight.

Though air travel accounts for 2 percent of humanity’s greenhouse gas emissions, those emissions are growing, and all the technology fixes for cutting carbon, let alone getting to zero emissions, demand difficult trade-offs, researchers say.

For Solar Impulse 2, engineers delicately balanced requirements against their drawbacks, from the weight of the batteries to the surface area needed for the solar cells to the aircraft’s plodding pace.

Borschberg was at the helm for the longest leg of the flight, a 117-hour, red-eye from hell between Japan and Hawaii.

"This flight was extremely hard and tense on everyone," he said.

Number of propellers and batteries: four

He was kept aloft by 17,248 solar cells built into the wings of the carbon-fiber aircraft and a ground team that worked around the clock: mission planners, meteorologists, engineers and computer modelers all charting the best route forward.

"We are at the limit of the technology," Borschberg said. "You really have to squeeze everything out of what you have."

At the limits of the laws of physics

Wingtip to wingtip, Solar Impulse 2 spanned 236 feet, wider than an international airliner, but weighed as much as a minivan, tipping the scales at 5,100 pounds.

The idea arose in 1999 after Piccard completed his around-the-world flight in a hot air balloon. He took off with 3.7 metric tons of liquid propane and landed with just 40 kilograms of fuel to spare. The razor-thin margin led him to consider whether there was a way to go around the world without fuel.

Though airlines are not going to be buying solar-powered aircraft anytime soon, Borschberg said engineers are already investigating many of the technologies that let Solar Impulse 2 fly around the world: lightweight materials for cars, foam insulation for refrigerators and buildings, efficient power management for electronics.

But researchers say it’s going to be much harder to reduce carbon emissions from commercial aircraft in a practical way.

"The current aircraft are pretty near what the laws of physics allow in terms of thermodynamics of the engine," said Paul Peeters, an associate professor of sustainable transport and tourism at NHTV Breda University of Applied Sciences in the Netherlands.

Even without climate concerns, aircraft engineers are constantly looking for ways to save fuel, since every pound of fuel subtracts from the number of paying passengers on board or from the amount of cargo.

"The payload of an aircraft is directly a function of fuel efficiency," Peeters said.

When it comes to commercial airliners, incremental is huge

Plane builders have already picked most of the low-hanging fruit in fuel efficiency, so now many designers are chasing marginal improvements through lighter materials and better aerodynamics.

A zero-emissions airliner or a carbon-neutral aircraft is theoretically possible, but it would require a drastic technology leap that is likely decades away, Peeters said.

Electric motors are inherently more efficient than combustion engines, but batteries have only the fraction of the energy density of fossil fuels, taking up more space and adding more weight for much less power. A fuel cell-powered aircraft could be possible, but it would require more than a decade of research and development along with significant financial backing from the aerospace industry.

Peeters cited the case of the Boeing 787 Dreamliner. The aircraft uses lightweight materials and better engines for a 20 percent fuel savings (ClimateWire, June 21, 2013). The design was an incremental improvement, but it still took 12 years to develop and hit some snags with its new batteries that led to a worldwide grounding of the fleet (ClimateWire, Dec. 18, 2014).

A carbon-neutral biofuel would be an easier drop-in improvement, but costs are currently much too high for notoriously frugal airlines.

Meanwhile, the demand for air travel is growing year on year by roughly 5 percent.

"We need policies to contain that," Peeters said. "Otherwise, I don’t see any way to reduce the emissions or get them flat."

Developing a ‘mindset,’ not technology

The paper argued that proposed technology fixes for aviation have undermined the push to limit aircraft emissions, allowing lawmakers leeway to wait for a solution instead of making the hard choices to tax and regulate the industry right now.

"There’s also the problem that oil is extremely cheap right now, so some of the imperative is falling out in that respect," said co-author Scott Cohen, head of the Department of Tourism and Events at the University of Surrey in the United Kingdom.

"The very first to consider would be: Do I have to travel at all?" Cohen said. "If you do need to travel, are there options outside of planes?"

If flying is the only option, then spring for a direct route instead of connection, he said. Passengers also have the option of buying voluntary emissions offsets for their air journeys, but Cohen cautioned that offsets should not be used as an indulgence, where they may have the rebound effect of encouraging more air travel, guilt-free.

And conscientiousness may be Solar Impulse’s biggest impact on aviation.

Click here to view a video of the Solar Impulse 2 landing in Abu Dhabi.