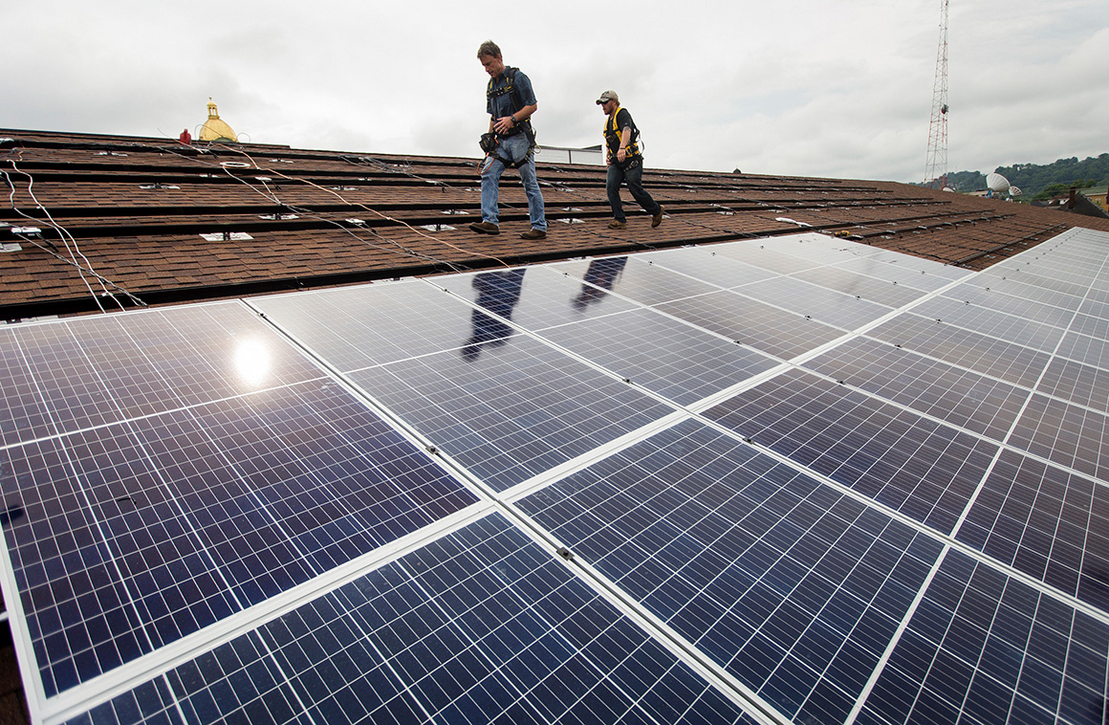 The solar energy industry is concerned about the fate of climate legislation in Congress and trade issues. Sholten Singer/Associated Press

Solar companies are pressing for action on Democrats’ climate and social spending bill as they await a trade decision from the Biden administration that threatens to roil the industry.

The Commerce Department is set to decide today whether to open a probe that could lead to fresh tariffs on solar imports. Solar developers and their top trade group warned this week that such tariffs could paralyze the industry, citing current inflation woes.

Adding to the solar industry’s concerns is the fact that the $1.7 trillion “Build Back Better Act,” which contains crucial tax incentives for the industry, remains stuck in limbo.

Taken together, it’s a situation that could significantly undercut solar deployment in the next few years, industry officials said, pointing to ambitions laid out by President Biden to move the electric sector to net-zero emissions by 2035.

“Between trade, manufacturing and the critical demand drivers that this legislation will provide, it’s really important that we get it right as quickly as possible,” Daniel Whitten, vice president of public affairs for the Solar Energy Industries Association (SEIA), said in an interview.

Solar deployment during Biden’s first year of office in 2021 lagged behind deployment in the final year of the Trump administration, as inflation and supply chain issues dogged the industry.

Speaking on background to talk candidly about pending decisions facing the Biden administration, executives from some of the nation’s largest solar developers told E&E News this week that the White House is facing the possibility that deployment will not meet expectations yet again if the wrong policy levers are pulled.

But they said there’s still time to lay the foundation for a return to the rosy outlooks of solar deployment that have been associated with the industry for the past decade, especially if Democrats can relaunch efforts to pass a reconciliation full of incentives that could spur record growth in the industry.

The Commerce Department decision, however, will likely be critical.

At issue is a petition filed by manufacturer Auxin Solar Inc. that asks the department to investigate whether Chinese manufacturers are circumventing anti-dumping duties by assembling panels in Malaysia, Thailand, Cambodia and Vietnam (Energywire, Feb. 10).

Should it go forward, tariffs could jump as high as 250 percent for an imported panel from those countries. That high cost would affect every project, executives said. Even the possibility of those costs would cause projects to be halted during the six-month investigation.

SEIA has been warning that such an investigation could affect 80 percent of all panels imported and 60 percent total panels used by the solar industry since the petition was filed earlier this year. Whitten said it could affect some 16 gigawatts of solar projects annually, more than half of what was installed in the United States last year.

“I think those effects will happen with the initiation of the case — merely the initiation,” Whitten said. “I mean, we’re literally refreshing the Commerce webpage right now for that decision.”

Commerce declined to comment on timing or the decisonmaking process of the petition.

The threat has attracted bipartisan attention on Capitol Hill.

Sens. Jacky Rosen (D-Nev.) and Thom Tillis (R-N.C.) led a letter earlier this month urging the department to carefully consider the validity of the petition, especially considering the implications it could have for the deployment industry. Rosen echoed those concerns this week.

“I’ve been trying to make them aware,” Rosen told E&E News of her efforts with the Biden administration this week. “I’m hoping we have a decision that moves forward with allowing us to continue to create those jobs in Nevada and across the country, and Congress needs to pass these bills to increase solar manufacturing here.”

Democrats, along with the administration, have looked to pitch climate action as a jobs program.

Proponents of the tariffs say the protections are needed to help spur domestic production. Current capabilities from the industry represent production of about 3 GW worth of panels a year. That number could easily be consumed by a single major developer, executives said, in a sign of how the tariffs could affect the industry.

While trade concerns predominate, developers are anxious about the success of Democrats’ long-term climate ambitions.

In the past year, the cost of deploying solar has crept up nearly 20 percent due to inflationary pressures. Tax credits like those included in the “Build Back Better” reconciliation package could help offset those cost increases, industry representatives said.

“That seems like an opportunity that we should not miss … and so we’re very anxious and continuing to take the message to the Hill,” said Erin Duncan, vice president of congressional affairs at SEIA.

Executives suggested that if the Biden administration actually wanted to spur domestic production of panels, its focus should be more on finding a path forward for the $325 billion in clean energy tax credits that were included in Democrats’ reconciliation push.

That bill set aside billions in tax credits for clean energy manufacturing facilities, such as the so-called 48C tax credit, which would give priority to companies that site their plants in communities where a coal mine or coal-fired power plant had recently been shuttered.

Such a tax structure already has interest from investors, who could respond with a build-out of domestic production capacity — that is, should those incentives become law, the companies said.

One executive said his company is tracking interested parties that could potentially produce up to 18 GW of domestic panels a year. Another said their company has already been contacted by interested manufacturers that are trying to sell factory capacity ahead of time, should the credits go forward.

Additionally, the 10-year extension of renewable investment and production tax credits contained in “Build Back Better,” along with extensions to energy storage technologies, has the potential to give decadelong certainty to the industry. Such assurances could unleash a massive wave of deployment.

Despite some setbacks, industry representatives said they remain optimistic that a deal can move forward in the coming months, especially as Sen. Joe Manchin (D-W.Va.) appears poised to return to the negotiating table after squashing the framework that passed the House late last year (E&E Daily, March 23).

Industry is eyeing a July 4 timetable for tangible progress on the bill, one executive said. Should Democrats falter, that time frame is about when companies would need to go to other contingency plans and begin pulling project planning for some new builds, one executive warned.

According to a January letter sent by 300 renewable adjacent companies and developers, every month of inaction on the reconciliation package is equivalent to nearly $2 billion in lost economic output.

Senate Democrats appear confident they will start moving again, according to Finance Chairman Ron Wyden (D-Ore.), who appeared virtually at the American Council on Renewable Energy policy summit yesterday. He mentioned April as a time frame when lawmakers may have appetite for returning to the bill.

“I believe, as of today, as we look to the kind of next version of what was originally called ‘Build Back Better’ — still very strongly positioned,” Wyden said.