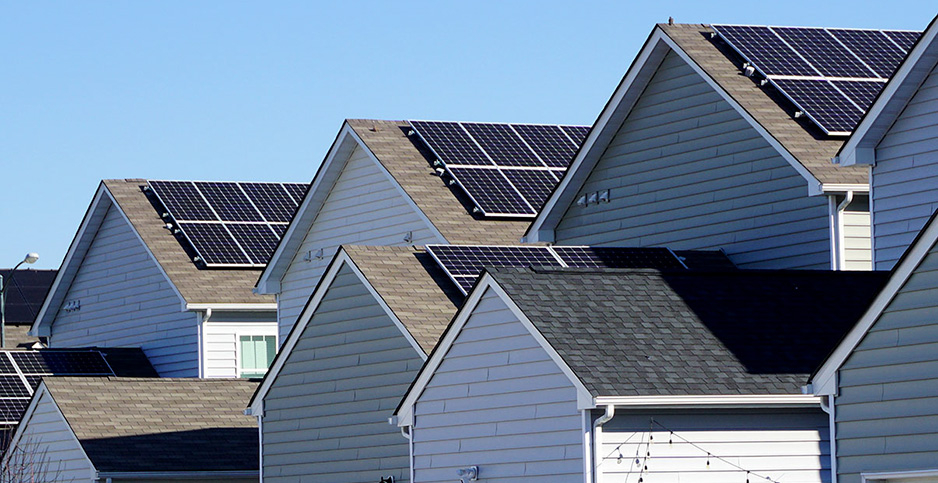 The solar industry is experiencing an upswing in business that it didn't foresee in the depths of coronavirus lockdowns a few months ago. Rooftop solar panels are pictured on homes in Richmond, Va. VCU Capital News Service/Flickr

After staring into the abyss during the coronavirus lockdowns earlier this year, the solar industry is a bit startled to find itself thriving again.

Many rooftop installers have hired back most of the people they furloughed. Stock prices are through the roof. The phones are ringing again with customers who want solar, this time with a side of batteries.

There’s still plenty to worry about, with a recession and pandemic raging, and there’s a very real threat that customers and investors could flee at any time. The industry has advocates still asking Congress to give it some breaks.

But many are seeing the outlines of a healthy, but altered, normal.

"I’m trying not to let myself believe that’s where we are right now," said T.R. Ludwig, the co-founder of Brooklyn SolarWorks, a New York City installer that furloughed its entire 44-person staff and has since brought 40 of them back.

"It was a pretty scarring experience," he added.

Few parts of the energy industry suffered as quickly or as deeply from the coronavirus pandemic as solar. The impact was greatest among rooftop-installation companies, which provide most of the roughly 300,000 jobs the industry had before COVID-19 hit.

Installers, which by necessity visit lots of homes, were hit by a triple whammy.

Customers didn’t want workers at their homes, workers didn’t want to visit customers, and economywide lockdowns made it unclear whether businesses could legally operate (Energywire, April 8).

Now that lockdowns have eased and new, COVID-19-era social norms are taking hold, the solar business is on its way back. Sales pipelines are building; some are even hiring.

But whether jobs are returning is a matter of debate — and whether the industry needs a helping hand from lawmakers.

This week, a coalition of clean energy groups said that 500,000 solar, wind and efficiency jobs haven’t yet come back and are at risk of being lost permanently (Greenwire, Aug. 12).

"I think that it’s very, very unlikely" that jobs are back, said Philip Jordan, a vice president of BW Research Partnership, which does surveys of clean energy jobs. "It hasn’t bounced back as quickly as the other sectors."

Clean energy advocates are brandishing the specter of job losses in asking for tax changes, such as reinvigorating the federal solar investment tax credit and offering direct payments instead of credits.

"Some companies are doing quite well, some are not," said Justin Baca, the vice president of markets and research at the Solar Energy Industries Association, solar’s main lobbying group. "We want all companies to thrive, and that’s not what’s happening right now."

But recent financial filings from public solar companies, along with interviews with six smaller, private companies around the country, indicate that the government’s Paycheck Protection Program, and a welcoming new attitude from customers are pushing solar’s momentum near to where it was before the coronavirus arrived.

In fact, a group of solar analysts recently concluded that U.S. residential solar installations might grow as much as 10% this year, despite the economic crater created by the coronavirus.

That trajectory is drastically different from another part of the energy sector — the oil and gas industry — where job losses weren’t so bad early in the coronavirus crisis but are now accelerating.

Jobs in oil field services and equipment, which account for the most fossil fuel industry’s employment, dropped by 9,300 in July after a drop of 6,500 in June, according to data from the U.S. Bureau of Labor Statistics.

A ‘drop to zero,’ then a climb

One part of the solar sector that is feeling optimistic is publicly traded solar companies, most of which reported their second-quarter earnings in the last couple of weeks.

After falling off a cliff in March, when the coronavirus essentially shut the economy down, the stock prices of all three have scaled a far taller cliff to their highest stock prices ever. The same is true for Enphase Energy and SolarEdge Technologies Inc., companies that make inverters, a crucial solar component.

"Frankly, it’s surprising to me to see how steady this business has been operating through what clearly are just huge issues, right, both health and economic," said John Berger, the CEO of Sunnova, on the company’s earnings call two weeks ago.

In the period April to June, Sunrun added more than 10,000 customers, SunPower Corp. added 8,000 customers, and Sunnova added 6,200 customers. Each said that a horrible April was more than made up for by a bustling June.

Smaller private companies, which make up two-thirds of the jobs in the solar industry, are also seeing the customers come back.

"All indicators internally are showing a really strong recovery from what was essentially a drop to zero," said Jonathan Cohen, the government liaison for SUNation Solar Systems, one of the largest installer of solar panel on Long Island, in New York state.

That’s an especially meaningful statement in New York, which saw the nation’s most severe solar downturn.

Not only was the state the epicenter of contagion, but solar businesses went into a near-coma as the state declined to name solar installation as an "essential business," even as it achieved that status in most other states.

Statewide, 65% to 70% of the 10,000-person solar workforce was furloughed, according to Shyam Mehta, the executive director of the New York Solar Energy Industries Association.

"We had no idea when we’d be able to work again," Mehta said, pointing out that smaller solar businesses often have enough cash on hand to last a few months. "There was real existential concern for the industry as a whole."

New York’s solar lockdown was lifted in May. Before, SUNation had furloughed two-thirds of its 170 employees.

Now it has brought back all but 20 of its workers. The remainder, Cohen said, didn’t want to come back. The company has hired some new people and is advertising for six more.

If the industry is indeed starting to flourish again, it is in a world that operates by a whole new set of rules.

"It’s kind of a new company after COVID," said Joe Marhamati, the co-founder of Ipsun Solar, a Washington-area installer, which also said sales are on the way up again. "It forced us to make some really difficult decisions."

The changes demanded in order to reduce the threat of spreading a virus have in many ways made business less efficient.

The days of simply packing workers in a van and sending them to a work site are over. First, everyone’s temperatures are taken before a shift — and anyone with a fever is sent home. A single person drives the van with the gear, and others travel solo in other vehicles. Any visits to the home office are done in staggered shifts.

Conversely, COVID-19 is starting to make a different part of the business more efficient: sales.

Like salespeople everywhere, the solar industry had to figure out overnight how to turn what has always been a handshake, kitchen-table interaction into one conducted by Zoom or Cisco Webex. Some are pleased by the results.

On a call with investors last week, Lynn Jurich, the CEO of Sunrun, said the company has seen the productivity of its sales representatives shoot up by half. She said, "It’s simple, but it’s attributed to the fact that the majority of them say they’ve saved 10 hours per week driving."

Smaller companies — at least those with the resources to have dedicated salespeople — are noticing the same thing.

"That’s been incredibly successful," said Cohen of SUNation. "Video meetings have vastly increased the number of customer interactions we can do in a single day."

It helps that customer shyness to have workers at and on their homes has lessened.

While many people are in profound economic uncertainty, many other well-to-do homeowners are not. Those stuck at home are busying themselves with home-improvement projects, like finally getting that solar system put up.

"I’m surprised that customers were willing to jump back into it as willingly as they did," said Ludwig of Brooklyn SolarWorks, another New York solar business that was once hard-hit. "There’s a lot of negative news out there, but solar is something positive they can do."

Both the big public solar companies and the scrappy small ones said that their healthier outlook is partly because of the growing popularity of home batteries.

The wild swings that align with climate change — wildfires in California, and the busy hurricane season that is already pummeling the East Coast and the Gulf states — are leading more people to pair their solar array with a backup battery to guard against blackouts (Energywire, July 13).

That’s the case for Bortman of Exact Solar.

Speaking last week, as the East Coast still had wide blackouts after Tropical Storm Isaias, she said, "We’ve had 10 of our customers email or call and say, ‘You know that battery-backup stuff you mentioned to me when you installed my system?’"

At Sunnova, the number of customers adding batteries to their systems last quarter more than tripled from the same quarter last year, from 11% to 34%.

But one storm cloud that remains stubbornly on the horizon for the solar sector is whether big investors are going to stay in.

That, in turn, is intimately tied to the federal solar investment tax credit, an engine of solar adoption that is sputtering amid a severe recession (Energywire, March 27).

The tax credit works well as long as investors have profits that they want to offset with a credit. But with so few making profits right now, the appetite for credits has dried up.

This is endangering the possibility of big projects, like utility-scale solar farms and all companies outside the biggest, most creditworthy top tier.

"The reality of what we see in the market is that most of them [the counterparties] kept the commitments they had before COVID-19. But signing up new transactions is very hard," said Guy Vanderhagen, the CEO of Origis Energy, a big developer with almost 3 gigawatts of solar projects to come online in the next three years.

Berger, the CEO of Sunnova, acknowledged in his call with investors that his company will weather the tax-credit problem but other, smaller competitors might not.

"The banks are going to huddle with those that are bigger, have scale like ourselves, maybe one or two of our competitors and that’s probably about it," he said.

The solar tax credit declined from 30% to 26% this year, on a schedule set by Congress years ago. SEIA, the solar lobbying group, and others are asking Congress to bump the credit back up to 30% or to make it available instead as a cash payment, which would make it far more useful to recession-stressed investors.

Overall, the fact that the COVID-19 clouds are parting is still a topic of wonderment for many in the solar industry, like Eddie McLaughlin, the owner of Repower Orange, a residential and commercial solar installer in Southern California.

He, like other business owners, is wary that a second lockdown could imperil his business if the virus spreads further in the fall. But for now, the customers are back, which seemed impossible just a few months ago.

"I definitely can’t complain," he said with a laugh. "We’re not going out of business."