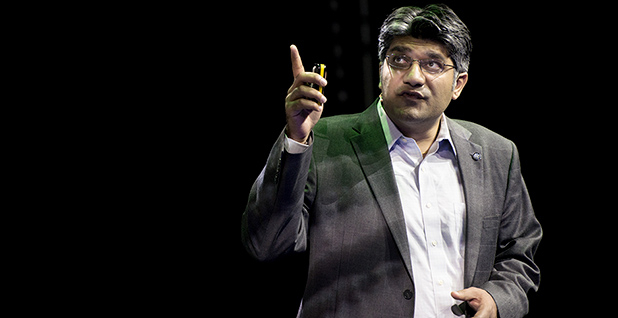 Shah is tasked with reviving an office that largely went dark during the Trump administration, making just one new award. Under Obama, it lent billions of dollars for clean energy and clean vehicle projects — winning praise from many advocates and giving companies like Tesla Inc. a funding boost. It also drove conservative opposition, thanks to a handful of high-profile bankruptcies like that of solar manufacturer Solyndra.

Now, the office’s loans and loan guarantees could be a central tool for the Biden administration’s promotion of clean energy — particularly if bills have trouble passing a still-divided Congress. The loan office has over $40 billion left at its disposal for backing innovative projects that might otherwise have trouble securing sufficient private-sector capital, ranging from renewables to advanced nuclear and advanced fossil fuels.

"He’s got to dust the programs off and get them going again," said Dan Reicher, a senior research fellow at Stanford University and a former member of the Obama transition team who has long pushed the office to back new projects. "The biggest dilemma for him is how to go from zero to 60 in a successful way. He’s got to take the measure of the staff he has and potentially add to those ranks."

A former executive and co-founder at solar developer SunEdison LLC, Shah is known for pioneering the use of the power purchase agreement (PPA) for residential solar. Under the concept, customers could get rooftop systems installed for free, while paying a fixed cost over the long term for the electricity they produce. That helped give residential solar its first growth spurt in the 2000s.

Shah has been outspoken in the press, recently acting as co-host of Greentech Media’s "The Energy Gang" podcast, and challenged other leaders in the clean energy world.

"I am a capitalist," he told the Natural Resources Defense Council’s onEarth magazine in 2009.

Shah once argued that subsidies for renewable energy should be axed, along with those for fossil fuels, and accused the U.S. Energy Information Agency of lowballing projections for wind and solar growth (Greenwire, April 5, 2016). And when Microsoft Corp. co-founder Bill Gates announced his Breakthrough Energy Ventures coalition to invest in early-stage clean energy technologies in 2015, Shah opined that the effort was too concerned with finding new "miracle" technology.

"I am not against innovation, but we don’t need to be telling people that we need it to reach the 2 degrees milestone being talked about in Paris," he wrote at the time on LinkedIn. "What we need is deployment."

The following year, Shah led an uprising of rooftop solar companies against the Solar Energy Industries Association (SEIA), circulating a letter that accused the industry’s main trade group of focusing too much on federal policies that benefitted utility-scale developers and neglecting state capitols that controlled the fate of residential installers (Energywire, Sept. 8, 2016).

SEIA defended its record, saying in a letter at the time that it "operates in an open, democratic fashion, with discussion, debate and a variety of opinions welcomed at every level."

During the Obama administration’s deliberations over trade policy, Shah also fronted a group of solar installers known as the Coalition for Affordable Solar Energy (CASE) in opposing a manufacturer-led petition for tariffs on Chinese-made solar cells and panels. The Commerce Department ended up imposing tariffs but at a lower rate than requested.

What’s next at DOE?

At DOE, Shah will be the office’s last word on loan awards and negotiate final approval for them from the Office of Management and Budget. Much of the total amount — nearly $20 billion in total — is earmarked for advanced fossil energy and advanced nuclear projects.

A slightly larger amount, almost $22 billion, is available in the form of direct loans or loan guarantees for clean vehicle and renewable energy projects, while yet another $2 billion pot can support energy on tribal lands.

Some energy researchers expect Shah to oversee a push into batteries and their associated supply chains, given their dual utility for vehicles and grids as well as the Biden administration’s focus on creating green jobs. That speculation was fueled by guidance issued by LPO in December, indicating it would give special consideration to "critical minerals" projects including those used in batteries (Energywire, Dec. 2, 2020).

Shah may also have to negotiate the fault lines of partisan politics. To date, the Loan Programs Office is operating in the black, having raked in more in interest payments than it has lost to company collapses.

But free-market conservatives oppose on principle the program’s practice of putting taxpayer money on the line for private companies. Some GOP officials have warned about the reoccurrence of incidences like Solyndra, which went belly up after getting a $535 million loan (Energywire, Jan. 26).

Granholm said at CERAWeek that the Loan Programs Office would be investing in advanced vehicles, carbon capture, advanced reactors and other projects.

"Jigar has written the playbook on how to drive the market towards clean energy solutions," she said.

"He’s going to help us put together an indomitable portfolio of investments for American taxpayers, that will help us tackle climate change and create jobs."