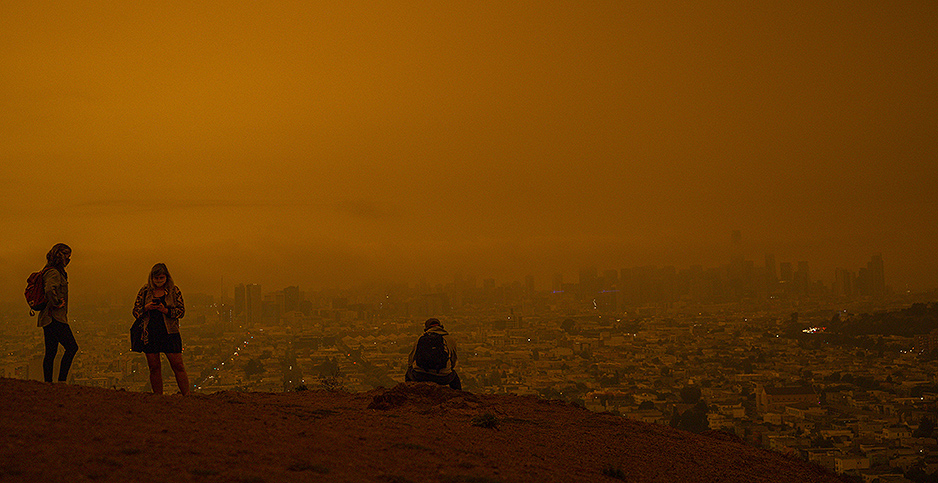 Sightseers take in the view atop Bernal Heights Park against an eerie mixture of fog and smoke casting an orange glow shrouding the San Francisco skyline around 3 p.m. local time Wednesday. Smoke from wildfires in the Golden State has caused a drop in solar power generation. Peter DaSilva/UPI/Newscom

Smoke from California’s monstrous wildfires has turned the color of the skies into a doomsday reddish-brown — and slashed the output of the state’s array of solar power installations, by far the largest in the nation.

Shortly after noon yesterday, statewide solar generation recorded by the California Independent System Operator was almost one-third below the levels reported on many days in the summer, before the outbreaks of fires last month.

Wind from offshore has pushed smoke into areas where solar installations are concentrated. "We are seeing reductions to behind-the-meter and large-scale solar throughout the state," said California ISO spokeswoman Anne Gonzales.

The drop in solar generation forced the grid operator to pull again on power imports from out of state, including crucial supplies on long power line connections from California’s northern neighbors, where wildfires are also raging. And once again, the state had to turn to natural gas generators, sharpening the conflict between California’s clean energy goals and the need to keep lights on.

"With the wildfires that are burning in California and the Pacific Northwest, it’s very clear that with the smoke that’s in the air, there is a reduction in the amount of light" that can reach solar panels, said Michael Bolen, project manager for solar generation at the Electric Power Research Institute.

And there’s a second effect caused by the sepia tinge that is staining skies over the state, said Bolen, whose office is based in Charlotte, N.C. "That [color] is because of the way the solar spectrum changes at it passes through the particulates in the air," he added. "That also affects how much PV [solar photovoltaic] modules can produce."

A chain of wildfires called the August Complex was triggered Aug. 17 by various lightning strikes between Sacramento and Eureka, Calif., causing a similar drop in solar output, according to California ISO. Solar output picked up by month’s end, though the fire is still not fully contained.

Then the state was hit again by the Creek Fire near Fresno that began Sept. 4, trapping more than 350 campers, who had to be rescued by helicopter, in the Sierra National Forest (Greenwire, Sept. 8). The Bobcat Fire broke out two days later in the Angeles National Forest.

The strain on California’s power supplies last month, during a siege of temperatures above 100 degrees Fahrenheit throughout the West, compelled utilities to order rolling power blackouts that affected hundreds of thousands of citizens.

Some officials pointed out that it was as if the climate change threat was delivering multiple blows to a state with the nation’s most ambitious goals for fighting back via steep carbon emissions reductions from power generation and transportation.

"If you are in denial about climate change, come to California," Gov. Gavin Newsom (D) said in a video at the Democratic National Convention last month.

A worsening trend of drought has turned California’s forests into tinderboxes in recent years.

Heat waves like those in August drive up demand for power to run air conditioning — and with California’s neighboring states also hit by record heat, power imports are limited.

This week, enormous smoke clouds from fires are cutting again into the solar resources that the state is counting on to hit the goal of delivering 100% of its electricity from carbon-free sources by 2045.

Solar production could be shaved even when fires cease, the Electric Power Research Institute’s Bolen said. "All those ash [and] smoke particles have to settle somewhere," he added. "If they land on the PV modules, then they could block light from entering the modules."

This season’s wildfires have intensified a debate about whether the state can stay on course to hit its renewable power goals without unacceptable risks to power delivery.

"The situation we are in could have been avoided," Berberich said. "For many years we have pointed out to the procurement authorizing authorities that there was inadequate power available."

The commission’s process for determining the state’s power needs "was broken and needed to be fixed," he added.

The debate flared again this week at a virtual leadership conference held by the Edison Electric Institute.

Former Energy Secretary Ernest Moniz warned that California policymakers were deluding themselves if they thought that a combination of solar power and battery storage could fill the state’s electricity needs through the coming decade.

Backing solar and wind up with natural gas will be unavoidable until new technologies are developed for longer-lasting batteries, energy from hydrogen and, eventually, technologies that clear carbon dioxide from the air itself, according to Moniz.

"Right now there is a shortage of [generating] capacity," Moniz said, citing "tremendous challenges" with addressing the variability of renewable power on both hour-to-hour time scales and wider shifts in seasonal demand.

"We need to do more in terms of looking at how the whole system fits together," he said.

Moniz’s onetime colleague in the Obama administration, former EPA Administrator Gina McCarthy, pushed back, insisting that the climate crisis is too urgent to allow sustained use of gas generation.

"We think there are opportunities that abound to make this transition" to carbon-free power, said McCarthy, now president of the Natural Resources Defense Council.

"It’s not only realistic, it’s imperative. We don’t have any choice," she said.

McCarthy and Moniz have each been making their cases for a clean energy transition to advisers for Democratic presidential nominee Joe Biden.

"My job isn’t to say how to get there," McCarthy told Moniz as the EEI panel Wednesday afternoon neared its end. "You’ve just got to think bigger. … You’re sitting here chatting. Get busy."