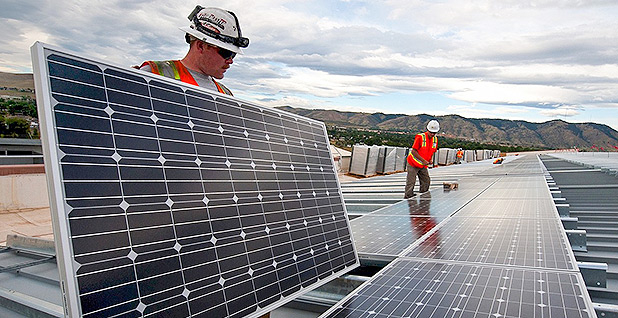 A California company used satellite and donor data to find out how rooftop panels break down among Democrats and Republicans. Photo by Dennis Schroeder, courtesy of National Renewable Energy Laboratory.

Attention, political donors: We know about your solar panels.

Or at least a California technology company does. By combining the records of the Federal Election Commission with satellite data, it claims to have discovered exactly who among America’s Democratic and Republican donors have solar panels on the roof.

The company, PowerScout, recently used its findings to suggest that solar is transcending political divisions. Among the 1.5 million political donors it anonymously analyzed across 20 states, it found that Republicans in some areas are adopting solar with almost as much zeal as Democrats.

But the survey left something else unsaid: Solar installations are becoming, like mortgage records or Amazon.com purchase histories, yet another piece of data that marketers can use to target sales pitches.

PowerScout is a startup with a dozen employees located in Oakland, founded not quite two years ago. It aims to make it easier for solar installers to find customers, or lower customer-acquisition costs, as they say in the industry. It developed its unique method with $2.5 million of awards from the Department of Energy’s SunShot Initiative, which aims to drive down the cost of solar power.

Customer acquisition is difficult for solar firms. A rooftop solar array can save a homeowner a bundle on electricity bills, but since the installation is expensive, it’s an easy decision to delay for another day.

According to PowerScout, 15 to 20 percent of a solar installers’ costs go toward finding those elusive customers, while the mortgage or car-loan industry spends 3 or 4 percent.

"We want to understand why consumers procure clean energy," said Attila Toth, the company’s CEO. "We find that we have to change marketing messaging based around who we’re speaking to."

That’s where the political-party solar survey came in.

PowerScout started by pulling public records of the donors to the two major parties and their candidates from 20 states. They set aside anyone who listed their address as a P.O. box, an apartment or an office, and focused on the single-family homes.

That left them with 1 million Democratic donors and half a million Republican donors. Then they overlaid the addresses with satellite images.

Other companies have used satellite data to ease the adoption of solar power. Sungevity Inc., a nationwide solar installer, uses satellite photos to determine how strong a candidate a house is for solar, given its roof area and sun exposure. Google does the same through its Project Sunroof, though like many Google energy projects, it appears to be less a business and more a hobby.

PowerScout does all that, but it also sought to do something harder: build a computer program that could tell, with no human intervention, which homes have solar panels.

The company used machine learning, in which the user trains the computer to identify patterns on its own by feeding it huge amounts of data. In the case of PowerScout, the computer program analyzed many images of roofs with solar panels, pixel by pixel, until it could distinguish a roof with solar panels from one that doesn’t, with almost no errors.

They fed satellite images of the political donors’ roofs through the tool, and presto — a list of several thousand solar owners, matched to their political leanings.

The data showed that 3.06 percent of Democrats and 2.24 percent of Republicans in those 20 states have installed rooftop solar. More mature solar markets, like California or Arizona, showed a narrower gap between Democrats and Republicans, while states lower on the adoption curve had relatively fewer solar users from the GOP. One state, Hawaii, had more Republicans than Democrats with solar.

Donors might be relieved to know that PowerScout doesn’t make their addresses public. However, the data is at the core of how the company makes its money. It delivers its solar-home information to solar financiers and installers, and collects a fee on referrals. Combined with other pots of data, it can help divine who among the neighbors is most receptive to a solar sales pitch.

And PowerScout is just getting started. The company’s next project will cross-reference solar-topped homes with home value, income and factors that suggest behavior.

The potential data sets stretch in all directions, some of them public, some of which the company has to pay for. Toth said PowerScout could learn what type of car a person drives, whether a home is undergoing an improvement project and far more.

"We’ve got lots of real estate data," Toth said. "We know in a home how you heat, how you cool, what the square footage is, how many people live there," he said. "We could estimate its home energy bill based on the tariff structure of the utility."

And all of it starts with the solar panels visible from an eye in the sky.