Solyndra vs. Tesla: Lessons from the last recession 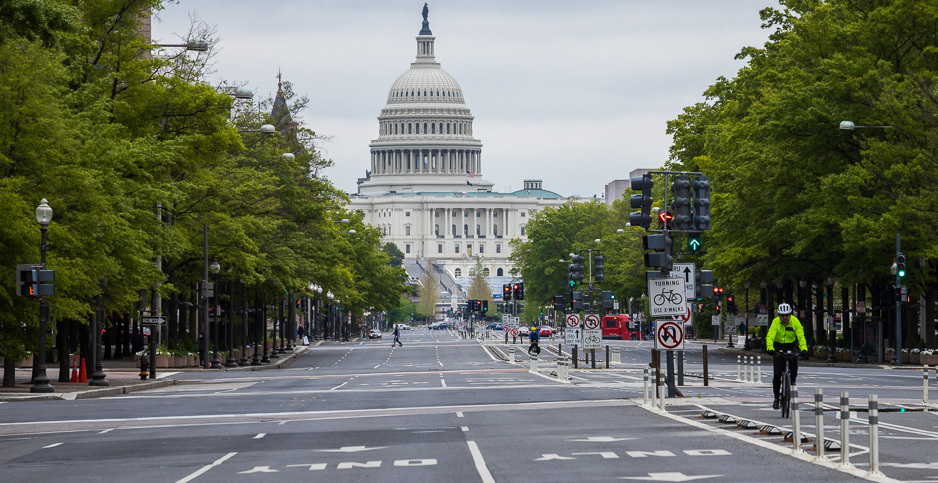 A view of the U.S. Capitol from a mostly deserted Pennsylvania Avenue in Washington during evening rush hour on Friday, April 24. Lawmakers have passed several economic stimulus measures in response to the coronavirus pandemic. Francis Chung/E&E News

The economic downturn is stirring a debate about how well President Obama’s stimulus package worked more than a decade ago — and whether the federal government should deliver a large infusion of cash for clean energy again.

With the current makeup of Congress, an ARRA-like package for low-carbon energy is unlikely to appear anytime soon. President Trump has repeatedly nixed the idea of extending lifelines to low-carbon industries, and this week, the Senate’s top Republican, Mitch McConnell (R-Ky.), acknowledged the push for a new stimulus but said his party would resist "unrelated ideological wish list items" (E&E Daily, May 6).

Some advocates have remained undeterred by Republican leaders, describing ARRA’s expansive outlay of funds as a model worth replicating for today’s most urgent challenges.

The country’s power grid, said clean business group E2 last month, needs $30 billion to $90 billion worth of transmission upgrades to protect against wildfires and handle an influx of renewable power. A nationwide building electrification program would wean heating and cooling systems off of fossil fuels and revive demand for energy efficiency services, which lost over 70,000 jobs in March alone. And a national network of charging infrastructure would lay groundwork for coming generations of electric cars.

In other cases, there is a renewed push for programs like the Energy Department’s 1705 loan guarantees, which were used during the ARRA era and beyond, but have not been tapped extensively by Trump.

Dan Reicher, who served on the Obama administration’s transition team for energy and has been campaigning for the program’s revival, pointed out that DOE still has the authority to extend tens of billions more in guarantees from the Treasury Department’s coffers.

"The bottom line is there’s money sitting there that, very sadly, hasn’t been moving. If there ever was a time to move it, this is it," he said in an interview last month with E&E News.

Yet many of the package’s energy programs also faced sustained criticism. Perhaps best-known was the Energy Department’s $535 million loan guarantee to solar manufacturer Solyndra, which later went bankrupt. That memory remains fresh among conservatives, who pilloried the loan programs as a prime example of government overreach.

Solyndra and a handful of other failures backed by DOE’s 1705 loan guarantee program for innovative technologies "became red meat for conservative and free-market organizations," said Nick Loris, an energy economist at the free-market Heritage Foundation.

In his April op-ed, Rove also made the solar company the butt of a punchline, saying the 2009 stimulus was full of supposedly shovel-ready programs that "ended as badly as Solyndra’s balance sheet."

"We’re not even asking for anything new in terms of the immediate response here," said Greg Wetstone, president of the American Council on Renewable Energy (ACORE).

Tax policy was an inconspicuous but effective area of support, Wetstone added. "A lot of the energy policy in this country lies in the tax code. That’s the reality, and that’s why a lot of the conversations are not about appropriations," he said.

"There’s been a lot of project development work" since ARRA was passed, said Brad Crabtree, director of the Carbon Capture Coalition, which said last week that it would seek new funds for commercial demonstrations and large-scale geologic storage.

Before that report, officials at the Labor Department’s Office of Inspector General in 2014 and the House Committee on Oversight and Government Reform, as well as Obama, indicated that the Recovery Act’s clean-energy jobs were more limited and emerged far more slowly than promised, however.

The package’s clean energy programs were originally intended to function in tandem with a cap-and-trade law that was never implemented, he added, which limited their impact.

Industries should ask Congress to inject money into existing programs rather than creating new ones, Perciasepe said. "If you create a new program, it’s impossible for it to be shovel-ready, because you have to get the rules for spending the money, get the staff to oversee it," he said. "You’re talking about billions of dollars.

"Existing programs already have a process under way for spending the increased funding," by contrast, he added. "We think that’s a lesson learned from the Recovery Act," he said.

"We met with a number of folks" — congressional staffers and federal officials — "who’d been very involved in the 2008 to 2009 effort," he said.

‘It isn’t a function of government’

The Solyndra-linked element of the 2009 stimulus — the Energy Department’s 1705 loan guarantees for innovative clean energy deployment — has been idled but not dismantled under the Trump administration. Last year, DOE extended a $3.7 billion guarantee to the Plant Vogtle nuclear reactor project in Georgia, the first and only such deal made since Trump entered office.

Reicher, who is now executive director of Stanford University’s Steyer-Taylor Center for Energy Policy and Finance, and other clean energy advocates have defended the loan program’s success rate for much of the past decade.

In total, about 1.6% of ARRA’s total funding to the Energy Department ended up lost to bankruptcies, according to a 2013 analysis by the Center for Climate and Energy Solutions.

"That’s better than the loss ratio of just about any big bank in the U.S.," said Reicher during an April 13 podcast from the Center for Strategic and International Studies. "This is a program that’s done very well."

Rather, regardless of "whether or not these projects are financially viable, or would provide good jobs, it isn’t a function of government to be spending money on those sorts of projects," he said.

But just like in 2008, he pointed out on the Center for Strategic and International Studies podcast, the country appears to be on the verge of recession as it nears a presidential election. "There’s a parallel there," he said.

"I’m frankly hopeful that a Biden transition team will be looking at a virus that’s been conquered and an improving economy, but we’ll see," Reicher said, referring to former Vice President Joe Biden, the presumptive Democratic presidential nominee.

"Obviously, we’ll see what happens with the election."