Some coal companies want Trump to stay in Paris pact 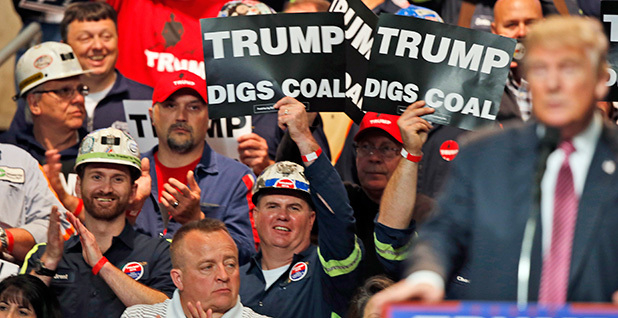 Some major coal companies are urging the White House not to walk away from the Paris Agreement. Photo courtesy of AP Images.

Cloud Peak Energy Inc. and Peabody Energy Corp. have urged the White House to use the pact to promote "clean coal" technology, according to news reports.

Trump’s executive action to begin unraveling U.S. EPA’s Clean Power Plan is a de-facto annulment of President Obama’s promise to cut U.S. emissions of greenhouse gases by as much as 28 percent from 2005 levels by 2025, Cloud Peak Energy said today in an email.

The president’s order fulfilled his campaign pledge to undo the economic harm of the Paris Agreement, letting Trump keep the United States at the table. These coal companies see the administration steering the international community toward policies that protect the fossil fuel sector.

Rep. Kevin Cramer (R-N.D.) has also encouraged the White House to seek concessions, such as weaker American emission and financial commitments and more veto power, if the United States chooses to stay in the agreement (E&E News PM, March 23).

"The president, you know, he’s a great dealmaker. And I think if he sees the opportunity to leverage influence in the world, I don’t think that’s necessarily a bad thing," Cramer said in a recent interview.

Cloud Peak said Cramer’s letter to the White House on the issue represents "a sound approach."

Peabody didn’t respond to a request for comment this morning.

The administration is still weighing whether to make good on Trump’s campaign pledge to "cancel" U.S. participation in the Paris pact, with a final decision timed for the Group of Seven summit in Italy next month (E&E News PM, March 23).

The European Union’s electric utilities announced yesterday that they would no longer build coal-fired power plants after 2020, citing the global transition to a low-carbon economy.

Republican opponents of Paris point to Trump’s explicit promise to leave the deal, and his executive action to thwart Obama-era climate policies, as signals he will not do much to comply with the Paris commitments. But some still want him to cut ties.

Trump ally and Murray Energy Corp. CEO Robert Murray is among those pushing complete withdrawal from the agreement, which he contends is an attempt by developing countries to "solicit welfare" from U.S. taxpayers.

"Those coal companies advocating to remain in the Paris Climate Accord are doing so for reasons other than the welfare of the American coal industry and our miners. Further, they are squandering the one opportunity we have to ensure reliable low-cost electricity in America and the world," a Murray spokesman said in an email.

Some industry groups, such as the National Mining Association, have opted not to take a public position on the issue.

Rep. David McKinley (R-W.Va.) said today that he has vocalized his objections to Paris to the White House, telling officials they should "cut a new deal" that encourages innovation and technology rather than demonizing coal.

"A lot of large corporations see it as an opportunity, perhaps, but smaller companies should be dubious of it," McKinley told E&E News.