Some Democrats fight Big Oil but are invested in its success 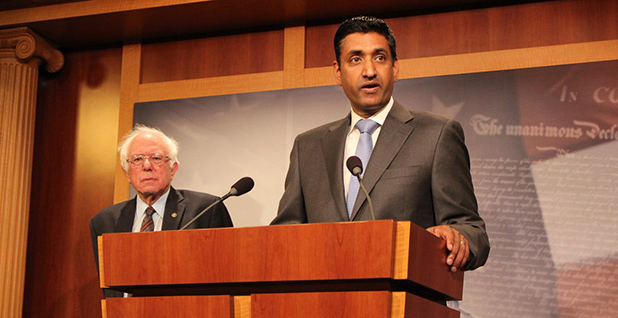 California Rep. Ro Khanna has been a loud voice in the Democratic Party to reject fossil fuel money. @RepRoKhanna/Twitter

A new effort to persuade politicians to refuse campaign donations from the fossil fuel industry netted the support of 15 members of Congress and hundreds of other candidates — mostly Democrats — running for office this year at local, state and federal levels.

Campaign records show the congressional incumbents — as well as other high-caliber challengers in separate federal races — have generally kept their promise to reject contributions from fossil fuel executives and the industry’s political affiliates.

But a review by E&E News of their most recent personal finance disclosures found that many of the same incumbents and candidates had their own money invested in coal, oil and natural gas businesses, often through broad investment funds and occasionally in direct stocks.

This is common for mainstream investors with savings organized in broad pools of money that hold stocks of hundreds of companies. And divesting was not a requirement of the No Fossil Fuel Money Pledge, a joint venture backed by at least 17 activist groups.

But it’s a reality that the next generation of environmentalists said underscores the challenge of eroding the political and economic might of the fossil fuel industry — as the sector is so tightly woven into the U.S. economy that even its most ardent opponents in Congress have a piece of their own livelihood tied to its success.

"We always want people to go further, and we would push politicians to sever all ties" to the fossil fuel industry — including personally, said Jamie Henn, U.S. program director at 350.org, one of the groups behind the pledge.

However, he added, "there’s a range of where we should start with that."

As a political message, the no-fossil-dollars push appeared to have notched a victory in June when the Democratic National Committee banned contributions from political action committees associated with the fossil fuel industry.

The measure was introduced by Christine Pelosi, committee member and daughter of Minority Leader Nancy Pelosi (D-Calif.). But the DNC backtracked a few weeks later — bringing into full view a divide on the left over how to approach the issue.

"The DNC must choose: does it side with grassroots momentum and communities on the frontlines of extraction and climate impacts, or does it side with the corporations and billionaires most responsible for the crisis?" a coalition of environmental groups wrote to the DNC after its decision. "It cannot do both."

Several of those groups were behind the pledge, which organizers said has its roots in state-level projects and combines elements of other political efforts — notably one that would have politicians refuse all corporate political action committee money and another that would have colleges and nonprofits divest from the fossil fuel industry.

"The broader purpose is to end the stranglehold that fossil fuel money and fossil fuel CEOs and fossil fuel front groups have on our political system," said Varshini Prakash, co-founder of the Sunrise Movement, a youth-driven climate change group.

Scott Wallace is another politician who has signed the no-fossil-fuel pledge. The Pennsylvania Democrat is running against Rep. Brian Fitzpatrick (R) in a swing seat outside Philadelphia that could determine which party controls the House next year.

Before the race, Wallace served as co-chairman of the Wallace Global Fund, his family’s foundation. An aim of the group is to encourage major institutions, such as cities and colleges, to sell their fossil fuel holdings.

Wallace said the foundation started the process by routing its own holdings away from those sectors.

"It’s not proper for the 95 percent of assets you don’t give away to counteract the goals of the 5 percent" of assets that you do, he said. "You don’t invest in dirty institutions while trying to promote clean ones."

Wallace, a multimillionaire who has pumped more than $4.8 million of his own money into the race, has tried to do the same with his own finances, according to federal records.

His assets include millions of dollars in investments that score well on a database, called Fossil Free Funds, which analyzes how much oil, gas and coal money is included in thousands of mutual funds, exchange-traded funds and other broad-based investment pools.

For each, the database, created by As You Sow, an environmental and shareholder advocacy group, lists the portfolio’s carbon footprint and the percentage of clean-energy investments.

For example, Wallace has between $5 million and $25 million invested in a portfolio called DFA International Sustainability Core. The database indicated this portfolio has no money in 30 of the largest coal-fired utilities and is 3.8 percent invested in 200 of the world’s largest clean-energy companies.

But — in another sign of the prevalence of fossil fuel money in the global markets — its 3.8 percent investment in clean energy is nearly matched, at 3.5 percent, in fossil fuels.

Andy Behar, CEO of As You Sow, said by text message that his group built the tool because many investors who signed on to divest from fossil fuels "had no idea what they actually owned."

Gallego, another pledge signer, has a more modest portfolio, one that likely resembles that of a broad swath of everyday Americans.

He has a retirement account with the city of Phoenix; several USAA funds from his time in the military; and a handful of large, diversified funds.

Gallego has assets in the American Funds Growth Fund of America, which has $15.8 billion, or about 9 percent of the fund, invested in fossil fuels, including some of the largest oil and gas companies. Same for his Phoenix retirement account: 11 percent of the entire fund, or $275 million, is held in fossil fuel stocks. Gallego’s share of these funds is relatively small — most of his stock holdings are between $1,000 and $15,000. The two-term congressman did not respond to requests for comment on the funds.

"Where do you draw the line?" he asked. "What percentage of fossil fuel investment is too much?"

“Where do you draw the line?”

It’s for that reason, he added, that it’s important for politicians to make a dent where they can by refusing donations from fossil fuel companies.

"There is an obvious risk that the votes that you cast are going to reflect the interests of your donors," Wallace said.

The energy industry, for its part, sees rejecting fossil fuel donations and divestment attempts as ineffective both economically and politically.

"I’ve always thought that fossil fuel divestment is a counterproductive strategy," said Scott Segal, partner at Bracewell LLP, a law firm that represents a mix of energy clients. "If progressive forces want to assist in the dialogue of shaping the future of the fossil fuel industry, they’d be well advised to stay a part of the investment community."

Both Reps. Khanna and Lee wrote to home-state Gov. Jerry Brown (D) in August asking that he block new fossil fuel projects in the most populous U.S. state.

"Corporate interests continue to undermine our nation’s leadership in the global fight against climate change," they wrote. "California will need to lead the way on limiting fossil fuel extraction just as we have led in the transition to renewable energy."

Lee has minor stakes in some fossil fuel companies, through three investment funds, while Khanna has significant financial ties to the industries, through his wife, Ritu.

She has millions of dollars invested in hundreds of companies. On that expansive list are more than a dozen fossil fuel companies such as Chevron Corp. and Exxon Mobil Corp.

Khanna acknowledged the investments but, like Wallace of Pennsylvania, argued it’s still critical for Democratic politicians to refuse campaign donations from the fossil fuel industry as party members seek to change energy policy.

"Certainly we can agree on not taking PAC or lobbyist money from the fossil fuel industry … which has often a vested stake in opposing policies that are going to lead to a renewable energy future," Khanna said.

"There’s no reason for Democrats to be taking money from that industry in terms of corporate contributions," he added. He went on to call the DNC’s decision to reverse itself on its policy of accepting campaign donations from the fossil fuel sector "tone-deaf."

Khanna drew a line, however, between politicians or parties rejecting contributions from the fossil industry and efforts by activists to pressure universities and other institutions to divest from that business sector.

"I think divestment is going perhaps much further than just not taking PAC money or corporate money," said Khanna, who pointed to the industry’s impact on the U.S. economy.

"If it weren’t for coal, if it weren’t for oil, we wouldn’t have a lot of America’s economy," he said. "And I think you don’t want to demonize people in that industry or their contributions" as the country attempts to move toward renewable energy.

"Divestment comes with a lot of moral judgment," said Khanna, who added it was more "appropriate in the case of South Africa and apartheid" — perhaps the best-known and most successful divestment campaign in modern history.

Segal said the DNC ultimately landed in the right place after moving to ban fossil fuel dollars in June, then reversing course two months later. Engagement is a better political strategy than "intellectual isolationism," he said.

Pressure from organized labor was a driving force behind the reversal. Unions such as the United Steelworkers represent workers who could be considered part of the fossil fuel apparatus while giving overwhelmingly to Democrats.

"The energy industry is not monolithic in its political viewpoints," Segal said. "Directly and indirectly there are many people employed in the fossil fuel sector that are Democrats."

Chloe Maxmin, 26, who helped develop a fossil fuel divestment campaign while an undergraduate at Harvard University, is running for a state House seat in Maine.

She’s familiar with the Fossil Free Funds tool and recommends it when asked. "You can put in a ticker for any fund," she said, adding, "None of my money is invested in fossil fuels."

But Maxmin is an outlier in that regard. Even Sen. Sanders has small positions in fossil fuel stocks through some of his investment funds.

Not only are fossil fuels difficult to cut out entirely, but financial services companies and banks often sell and label investment products as eco-friendly when they are chock-full of fossil energy stocks.

The International Sustainability Index Fund, by Fidelity Investments Inc., includes Total SA, one of the world’s biggest oil companies. And even TransCanada Corp., the firm behind the Keystone oil pipeline, touted its inclusion in the Dow Jones Sustainability Indices in a commercial.

Mainstream money managers have created more climate-friendly investment options, which analysts attribute to demands from deep-pocketed institutional investors, such as insurers and foundations.

Clara Vondrich, director of DivestInvest, which organized its own divestment pledge, applauded the French insurer and asset manager AXA for helping to drive this demand. The firm has divested about $2.8 billion of coal and coal power companies since 2015.

"When you have companies like that developing products, that really shifts the game," Vondrich said by phone. "There’s been such a proliferation of fossil-free products," she said. "It’s a matter of inertia."

The midterm elections are two months away. But some activists involved in the ban on fossil fuel contributions are looking ahead to future political battles.

RL Miller, president of Climate Hawks Vote, said that she could see this type of campaign being used against other industries, such as gun manufacturers and health insurance companies, or with Wall Street.

"I hope this can be used to reform and rethink money in politics," she said.

Prakash, of the Sunrise Movement, added that her group plans to be active again in 2020 — and that it’ll be looking to convince Democratic presidential candidates to take the pledge to refuse money from the fossil fuel industry.

"If you are a Democrat running for office in 2020," she said, "it should be a no-brainer that you don’t take money from fossil fuel CEOs, lobbyists or front groups."