Some Dems, sportsmen see chance to work with Bernhardt 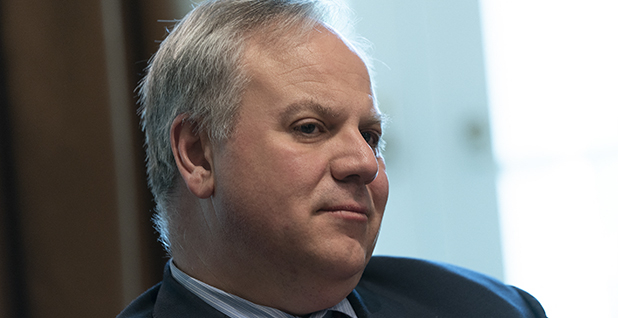 BOISE, Idaho — Newly confirmed Interior Secretary David Bernhardt was a topic of interest during a meeting of sportsmen here in recent days.

Bernhardt’s backers have long praised his policy acumen, political savvy and detail-oriented approach. Critics decry the former energy lobbyist’s ties to the oil and gas industry, calling him too conflicted to serve.

But interviews and comments made during the Backcountry Hunters & Anglers summit suggest a middle ground is emerging for lawmakers and advocates who see Bernhardt as a valuable decisionmaker in the Trump administration and a potential ally on issues they care about.

"When I’ve had success with secretaries of Interior with whom I did not share the same value set with, it’s when I can get them out of Washington, D.C., to see something on the ground, so you aren’t arguing about dogma in some paragraph of policy," said Sen. Martin Heinrich (D-N.M.) on Saturday during the annual BHA Rendezvous.

Bernhardt has been holding meetings with Democrats in an attempt to make inroads. An appearance on the Hill this afternoon before House appropriators will test his standing with the new majority in that chamber.

Heinrich, an avid sportsman, is a member of BHA and is close to the group’s president and CEO, Land Tawney.

The Democrat recalled a trip he arranged to get then-Interior Secretary Ryan Zinke out to the Sabinoso Wilderness in New Mexico. The visit resulted in Zinke accepting a donation of more land to add to the existing wilderness to increase public access to the area.

"My hope is that I can accomplish something similar to that with David Bernhardt," Heinrich said, mentioning that then-Deputy Secretary Bernhardt "actually played a really helpful role" in opening up Sabinoso.

"We are working with Interior right now to get them out to New Mexico" to find solutions to thorny problems in "ways that in the long run I think will actually serve everyone better," he said.

Heinrich, who helped shepherd the public lands package through Congress earlier this year, voted to confirm Bernhardt as Interior secretary in April, much to the chagrin of environmental groups.

One of the top priorities for the Democrat, along with the rest of the New Mexico delegation, is protecting Chaco Canyon, a sacred Native American cultural and UNESCO World Heritage site in the state, from future drilling and mineral extraction (E&E Daily, April 11).

Bernhardt is "more of a nuts-and-bolts guy" than Zinke was, Heinrich said in an interview last month after he voted to advance Bernhardt’s nomination out of the Energy and Natural Resources Committee.

"Zinke was more concerned with Zinke," Grijalva said. He added: "The shadow of the conflict of interest is a consistent. It hasn’t disappeared."

Heinrich said after the committee vote in April that Bernhardt has "been straight with me; he always returns my phone calls. And New Mexico has a lot of really important equities at the Department of Interior."

‘We’ve got to get shit done’

The leadership of BHA is similarly realistic about Bernhardt. "We’re going to treat Secretary Bernhardt just like we treat anybody else — elected administrative officials," said Tawney, answering a question from a BHA member during a public Q&A session at Rendezvous.

BHA’s conservation director, John Gale, said "the writing was on the wall a long time ago" for Bernhardt’s confirmation.

"I think people choose their battles, and they look at what’s important to accomplish once somebody is going to be in a decisionmaking position," Gale said, responding to a question about Heinrich’s vote for Bernhardt.

"And each member of Congress has to represent the best interests of the people that elected them into office. That’s their own calculation and their own determination."

Gale said political polarization and a lack of cooperation are impeding important work, not just at the federal level but at the state and local levels.

"I think all of us are good neighbors at home," Gale said. "We got to work every day, and we do our jobs, and we might not like the guy next to us in the cubicle or the gal next to us in the office, but we work together because we’ve got to get shit done, right?"

He added, "We have to put food for the family on the table. We need to get back to the middle where the decisions are happening, where things get done and compromise is not a dirty word."

BHA, headquartered in Missoula, Mont., has chapters all over the country. It morphed from 2,000 members in 2013 to 36,000 sportsmen and women six years later.

Tawney said 75% of BHA’s members are 45 or younger. A membership survey revealed the group occupies the political spectrum: 33% of members identified as independent, 23% as Republican and 20% Democrat.

The remainder of respondents either didn’t answer the question or labeled themselves as some other non-mainstream party, Tawney said.

"That looks like America to me right now," Tawney said. "There’s a lot of things that happen in this country where only one side can do everything right, and the other side, all they can do is wrong. I don’t think that’s the way the world works."

BHA was a force in pushing for permanent reauthorization of the Land and Water Conservation Fund this year and has made "keeping public lands in public hands" its central mission.

This year’s Rendezvous, a four-day conference in Boise, Idaho, attracted roughly 6,000 attendees from across the country and Canada. It featured various speakers on issues ranging from public lands management to venomous snakes in the backcountry. Participants enjoyed a hike-to-hunt, a wild game cookoff contest and an evening "campfire storytelling" event, among other activities.

The political influence of sportsmen and women is growing, especially as it relates to debates regarding access to public lands and wild places.

"When you come to an event like this five or 10 years ago and you asked people what LWCF was, 10 people would raise their hand," Heinrich said Saturday.

"And now, it would be, like, most of the room," he said. "I mean, I saw LWCF yard signs in parts of New Mexico this year that I was just like flabbergasted and very happy about."