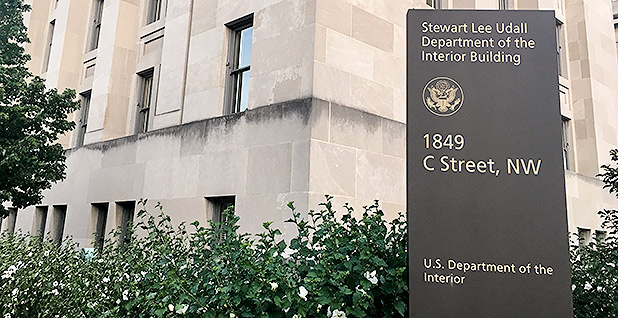 The Interior Department’s freeze on advisory committees is starting to thaw, at least in some regions.

While some panels seemingly remain in limbo, officials today announced a teleconference meeting for the apolitical-sounding Wildlife and Hunting Heritage Conservation Council.

All of those can be significant, even if they lack the sizzle of past Interior Department panels such as the Advisory Committee on Climate Change and Natural Resource Science.

"The committee … connects conservation organizations and individuals who are leaders in their own right with federal officials," wildlife and hunting panel member Robert Manes, Kansas director of the Nature Conservancy, said in an interview today. He added that "it’s been productive" in a number of arenas.

The Wildlife and Hunting Heritage Conservation Council was established in 2010 and at times can hike into tricky terrain. Last December, for instance, the panel declared its "strong support" for removing the Greater Yellowstone population of grizzly bears from Endangered Species Act protections.

"The great thing about the committee is that it has a fair amount of diversity on it," Manes said.

The council’s Aug. 30 teleconference, announced in the Federal Register, will take place about three months after the Interior Department’s decision to review the work of its 200-plus advisory panels.

The department said at the time that the review was part of Interior Secretary Ryan Zinke’s effort at "restoring trust in the department’s decision-making," as well as ensuring that the myriad panels complied with the requirements of the 1972 Federal Advisory Committee Act (Greenwire, May 5).

The review required a "temporary postponement" of the advisory committees’ work, Interior Department spokeswoman Heather Swift said in May.

Eight Senate Democrats from Western states subsequently wrote Zinke to say they were "very concerned" about the suspension of the advisory committees, which Interior officials initially indicated would last until September. The Bureau of Land Management told members of its 30 resource advisory councils to postpone scheduled meetings as part of the review (E&E Daily, May 12).

Bush’s executive order, among other things, directed federal officials to "manage wildlife and wildlife habitats on public lands in a manner that expands and enhances hunting opportunities, including through the use of hunting in wildlife management planning."

Presidential executive orders remain in effect until they are specifically revoked.

Some of the department’s advisory committees have apparently already expired on their own.

The 25-member Advisory Committee on Climate Change and Natural Resource Science, for instance, was given a two-year life span when established during the Obama administration. The group received its latest two-year renewal in June 2015. Though the panel’s charter included the option of another two-year renewal, its website speaks of the committee in the past tense.

The telephone listed for the climate change advisory committee’s "designated federal officer" was answered by a tape recording Monday that called the number "non-working."