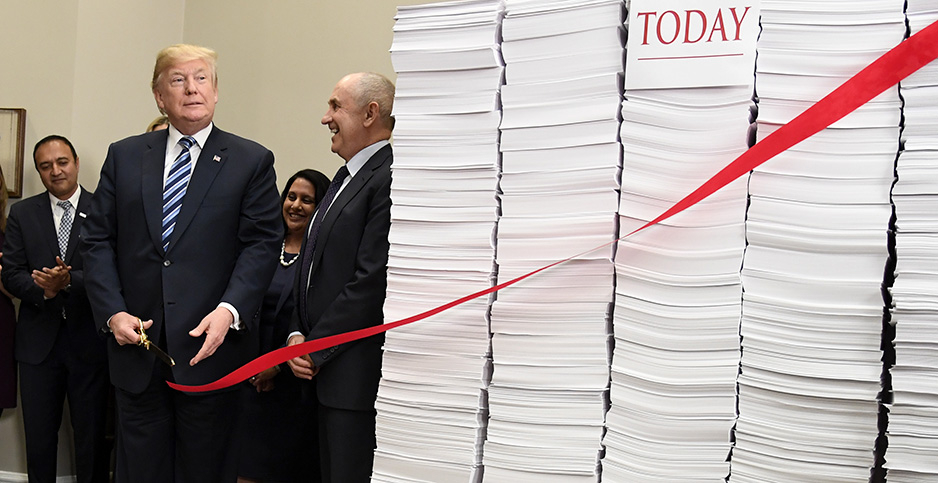 "[I]t’s not as simple as winners and losers, as some environmentalists would have it," Segal told E&E News in an email.

At the same time, Tyson Slocum, director of Public Citizen’s Energy Program, cautioned against giving industry too much credit for taking action to limit emissions beyond what the administration is requiring.

Slocum noted that instead of major multinational companies exerting influence on the administration’s agenda, players like Marathon Petroleum Corp., Murray Energy Corp. and the Independent Petroleum Association of America have gained the president’s ear and are helping to shape federal policy.

The Trump administration’s rollback of Obama-era clean car standards is perhaps the best example of rejection from industry.

Four major auto manufacturers have sided with California in its proposal to continue increasing vehicle fuel economy by 3.7% per year through 2025, albeit somewhat less ambitiously than the Obama team’s 5%-per-year change.

"Essentially, the auto industry is going to ignore them," Perciasepe said of the Trump administration’s pending final mandates.

Part of the auto sector’s motivation, like other major companies, is that it is navigating a global market that is driving a transition to cleaner-running cars, with China setting ambitious targets for electric vehicles and the European Union moving toward tighter vehicle emissions standards (Climatewire, April 8).

Unlike in the power sector, where affordable renewables are helping drive a shift toward less-polluting electricity generation, the price of electric vehicles hasn’t yet reached the point where it’s driving a shift to lower emissions. But that time may not be far off.

Perciasepe cited recent estimates that electric vehicles are expected to reach price parity with conventional ones in about four or five years. Already, EVs are seeing rapid growth in China, which boasts over half of the world’s electric vehicles.

The administration says the changes would mean it’s no longer required to draft a regulation controlling methane emissions from all existing sources (Greenwire, Aug. 29).

EPA’s plans come as a host of oil and gas majors have announced their own commitments to cut emissions, with some even coming out publicly in support of maintaining the existing Obama-era standards.

Given the breadth of emissions sources from the sector, it’s hard to know precisely how much voluntary reductions could counter the effects of the Trump EPA’s plans, said Vizcarra.

The Trump EPA has finalized its Affordable Clean Energy rule to replace the Obama administration’s Clean Power Plan. The new standards do little to nudge the power sector to accelerate emissions cuts and are backed by the National Association of Manufacturers and coal interests.

The agency’s own analysis found that the rule would dampen emissions by a mere 0.7% compared with a scenario with no limits on greenhouse gas emissions (Climatewire, June 20).

Benjamin Nelson, a vice president and senior credit officer at Moody’s, said in a statement that a weakened export market for thermal coal, coupled with the "significant retirement" of coal-fired power plants last year, has led to domestic oversupply and could lead to lower prices.

Certain appliance manufacturers have questioned the Department of Energy’s rollback of energy efficiency standards, according to comments to the administration.

Some analysts see the federal government’s deregulatory shift as a chance to take a sharply different approach to pollution control.