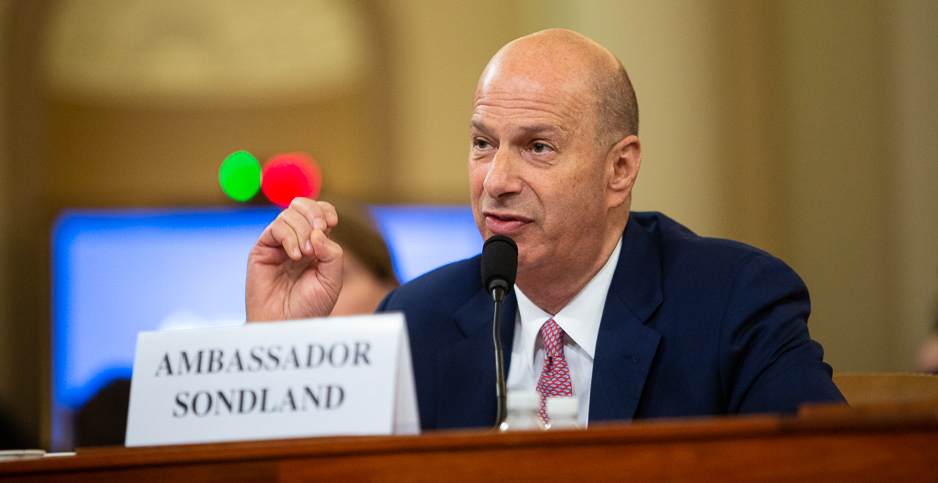 Energy Secretary Rick Perry was linked far more closely this morning to a push for an investigation connecting Ukraine energy giant Burisma Holdings Ltd. and the Biden family that had been sought by President Trump and is central to the ongoing impeachment inquiry.

U.S. Ambassador to the European Union Gordon Sondland, who along with Perry was one of the "three amigos" central to carrying out Ukraine policy, offered new testimony at a House impeachment hearing today that ties the Department of Energy chief directly to the proposed investigation.

He offered a specific email and other exchanges that showed the departing Energy secretary working for an investigation.

"Was there a quid pro quo … the answer is yes," said Sondland of Trump’s push. He went on to say "everyone was in the loop" on the effort, including Perry, Secretary of State Mike Pompeo and acting White House Chief of Staff Mick Mulvaney.

Sondland released a copy of a July 19 email exchange he sent to Perry and others that said the new Ukraine president was willing to announce investigations and was hoping for a phone call from Trump. Perry followed up by emailing Mulvaney to set up a call between Trump and the new Ukrainian President Volodymyr Zelenskiy.

Perry has previously been portrayed as involved with the others largely because of legitimate U.S. energy interests in Ukraine. He has declined to appear before the impeachment inquiry, saying it would violate executive privilege.

Intelligence Chairman Adam Schiff (D-Calif.) said again yesterday that Trump could face an impeachment charge of obstructing Congress for blocking officials such as Perry from testifying.

During a break, Schiff also told reporters the new testimony was the most incriminating yet for Trump. He said the panel "heard for the first time that knowledge of this scheme was pervasive. The secretary of State was aware of it, the acting Chief of Staff Mulvaney was aware of it, and, of course, at the very top Donald Trump … was implementing it."

Democrats believe Trump saw a Burisma investigation as possibly damaging to Joe Biden, a potential presidential rival next fall whose son, Hunter, spent five years on the energy firm’s board.

The Ukraine gas company has long faced concerns about possible corruption. The investigation, however, never took place once a whistleblower reported military aid to Ukraine was being held up by the White House and the inquiry was launched.

Asked about Sondland as he testified today, Trump said, "I don’t know him very well. I have not spoken to him much. This is not a man I know well. He seems like a nice guy, though."

She added in a statement, "As previously stated, Secretary Perry spoke to Rudy Giuliani only once at the President’s request. No one else was on that call. At no point before, during or after that phone call did the words ‘Biden’ or ‘Burisma’ ever come up in the presence of Secretary Perry.”