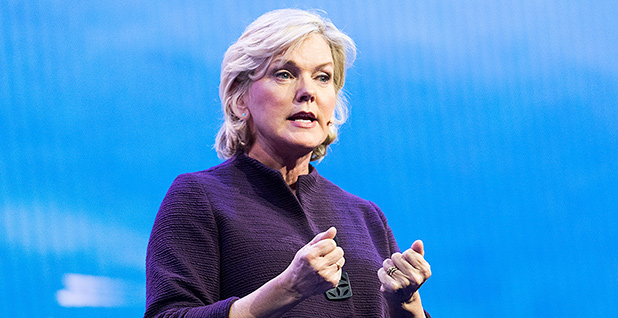 Former two-term Michigan Gov. Jennifer Granholm, who embraced renewable energy as the governor of a Rust Belt state, will be nominated Energy secretary as President-elect Joe Biden prepares to cast the Department of Energy as a key player in his bid to tackle climate change, sources say.

Granholm, a Biden adviser who was also mentioned as a possible domestic climate policy czar in the Biden administration, gives the incoming president an experienced political hand who has worked with Democrats and Republicans. She’s pitched climate change solutions to skeptical audiences, including autoworker unions. And she passes muster with restive green groups, which pushed Biden to reject any candidate with ties to the fossil fuel industry.

Granholm has championed green energy, arguing in 2016 that the United States should be "doing everything we possibly can to keep fossil fuel energy in the ground and developing the renewable side."

News of her potential nomination, first reported by Politico, drew applause from environmentalists who said she led Michigan out of the last recession by investing in clean energy and transportation.

"She knows these issues inside and out, and her experience will be invaluable as the Biden administration works to deliver a 100% clean energy economy," said Tiernan Sittenfeld, senior vice president of government affairs at the League of Conservation Voters.

"There’s nothing more central to that than Michigan and other industrial states," said Bledsoe, a strategic adviser for the Progressive Policy Institute. "Her being in the administration makes a lot of sense; she has experience with this."

In choosing Granholm, Biden passed over other contenders with DOE experience, including Arun Majumdar, the first director of DOE’s Advanced Research Projects Agency-Energy. Biden named him to his DOE transition team, and he is expected to still play an important role, a source said.

"Choosing a non-political figure who is a clean energy technology expert has a rationale, too, but maybe not for this moment," Bledsoe said. "Her experience is very consistent with what Biden and his team have said for 18 months: Clean energy means jobs."

Biden’s plan to tackle climate change includes a push to produce carbon-free energy by 2035 — a challenge that could make the Department of Energy the lead agency for those ambitions. He’s proposed a $2 trillion accelerated investment in infrastructure, innovation and clean energy deployment.

Granholm’s experience with Michigan’s auto industry could play a defining role, said Dan Reicher, who served as assistant DOE secretary for energy efficiency and renewable energy under President Clinton and worked on energy transition teams for Clinton and President Obama.

The transportation sector now surpasses power generation as the largest source of carbon emissions in the United States, and DOE and its laboratories are heavily involved in research and development into advanced vehicles and batteries, Reicher said. He noted that DOE’s advanced technology vehicle loan program provided the financing in 2010 for Elon Musk to purchase an auto assembly plant.

"That’s what backed Tesla, and the rest is history," said Reicher, who works at the Stanford Woods Institute for the Environment. DOE currently has more than $16 billion for similar projects to provide incentives to automakers to build more fuel-efficient cars, Reicher said.

Granholm, a former policy chair of the Democratic Governors Association, could also help Biden work with states, said Reicher, who worked with Granholm when she ran the sustainability practice at Ridge-Lane, a venture capital firm co-founded by former Pennsylvania Gov. Tom Ridge (R).

"States are really important in energy and climate policy, from renewable energy standards to 50 state public utility commissions and energy efficiency programs," Reicher said. "In an era where we’re likely to see more gridlock in Washington, D.C., we’re going to need state efforts even more, and someone who was a governor of a large and important state brings a lot to that."

Still, Granholm will need to build out a team to address the department’s other key missions, which include nuclear weapons, cleanup and science. Two-thirds of DOE’s budget is directed to nuclear security, including weapons stockpile maintenance, testing and nonproliferation.

If confirmed, Granholm would be the second woman to hold the top DOE post since the department was created in 1977.

Clinton appointed Hazel O’Leary to lead the department in 1993, making her the first and only woman and African-American to lead the sprawling agency, which includes 13,500 employees and 104,000 contractors.

Granholm endorsed Biden before the Michigan primary and has been a close adviser, helping him prepare for debates. In addition to the climate post, she was also floated as a possible secretary of Health and Human Services.

Granholm was also a top adviser to Democratic presidential nominee Hillary Clinton’s transition team in 2016 and a rumored pick for Energy secretary had Clinton been elected.

She turned to clean energy as a centerpiece of her efforts to resuscitate Michigan when she was elected governor in 2002. And she worked with the Obama administration on the 2009 bailout of General Motors and Chrysler, which included incentives for carmakers to invest in next-generation technology such as battery storage.

Then-Vice President Biden, the senior administration official on that effort, frequently visited battery manufacturing plants during his trips to Michigan during the bailout.

In an interview with the magazine Bioenergy Connection in 2014, Granholm explained how she pushed the state’s utilities to buy into renewable energy standards and imposed a business model that rewarded them for energy efficiency. In 2007, she would sign into a law a 10% renewable portfolio standard.

Yet Granholm said her biggest challenge was a Michigan Legislature opposed to renewable energy standards.

"It should have been higher, but that’s what we were able to get," Granholm said of the standards in the interview with the magazine, a joint publication from her alma mater, the University of California, Berkeley. "Then we adopted a huge suite of tax credits and tax incentives for various types of industries, from biomass to wind and solar."

Granholm supporters have pointed to dozens of clean energy initiatives she piloted across Michigan, even as they acknowledged she faced headwinds.

"One hundred percent on effort, 60% on success, but, yeah, there were things that she tried to do where we weren’t successful or she was too early," Stanley "Skip" Pruss, her former special adviser on renewable energy, told E&E News in 2016 (Greenwire, Aug. 30, 2016).

Like Obama and Trump, Granholm turned to executive power to get things done when the legislative process stalled.

In 2009, for example, she used an executive order to consolidate energy and environmental agencies in Michigan and appoint a leader for the state’s new Department of Natural Resources and Environment.

Michigan environmentalists praised her as "uniquely experienced" to lead DOE when the United States faces threats posed by climate change and a pandemic-induced economic slowdown.

"During Jennifer Granholm’s years as Michigan’s governor, our state experienced a transformation in its energy sector," Michigan Environmental Council President and CEO Conan Smith said. He noted that under her leadership, the state’s first renewable portfolio standard was signed into law and the state invested more than $500 million in clean energy jobs and projects — despite the recession that throttled Michigan. "Her intelligence, enthusiasm and relentless drive are exactly what America needs in our next Energy secretary."

Still, green groups that have pushed Biden to reject anyone with fossil fuel ties made it clear they expect further distance from the oil, gas and coal industries.

"Granholm has her work cut out for her to prove she can lead the transition to a more just, democratic, clean energy system," Greenpeace USA Senior Climate Campaigner Lisa Ramsden said. "The DOE’s role in COVID-related economic stimulus and the responsibility of carrying out Biden’s plan to make the nation’s electrical grid carbon-neutral by 2035 will both fall to Granholm.

"Climate destruction is only possible in a world in which racism is tolerated, and we need leaders in government who aren’t afraid to call out oil and gas corporations for their decades of unjust pollution. We’ll be watching to see if Granholm rises to the challenge."