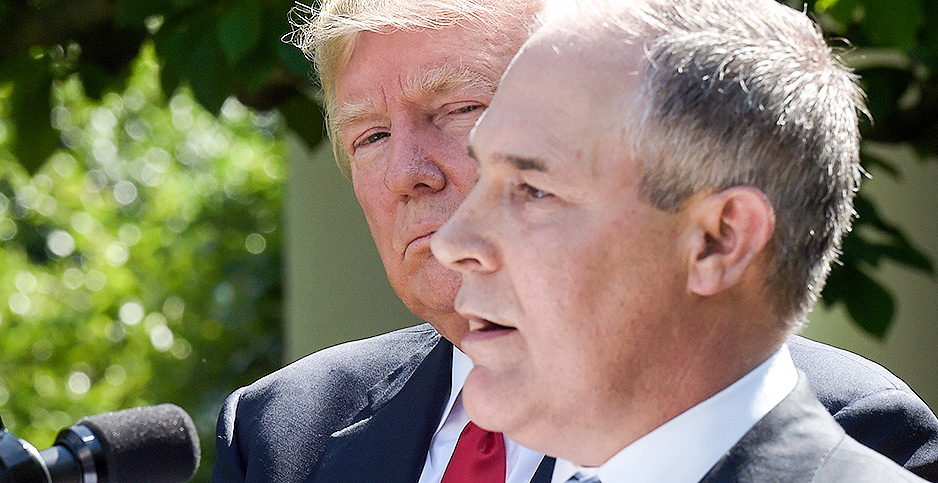 President Trump has privately said he supports a public debate to challenge mainstream climate science, according to administration officials. But there’s infighting about how it should occur — if at all.

The president has told U.S. EPA Administrator Scott Pruitt during several conversations that he supports Pruitt’s plan for a "red-team, blue-team" debate aimed at challenging the prevailing scientific consensus about humans’ impact on climate change, a senior administration official told E&E News. Another administration official said that "there is support for the initiative at the highest levels."

Pruitt has been pushing the idea of a climate science critique for months, suggesting at one point that it could be a debate that’s aired on television. Conservative groups and some Republicans have been eager for the EPA boss to get started; they see the exercise as an avenue to torpedo the so-called endangerment finding that underpins EPA’s climate rules.

Pressed by a House Republican last week to offer a timeline for the red team, Pruitt said work on the initiative is "ongoing" but that details could be unveiled as early as next month. "We may be able to get there as early as January next year," he testified.

But the administration isn’t unified behind the idea. "Pruitt has not been given authorization to go ahead with red team, blue team; there are still many issues to be ironed out," another administration official said.

It’s the latest example of infighting within the Trump administration over high-profile energy and environmental policies. It follows internal clashing earlier this year over whether to exit the Paris climate accord. In that case, Pruitt’s camp — the one pushing for withdrawal — came out on top, and Pruitt became the administration’s spokesman for the Paris exit.

Trump’s public statements — dismissing global warming as a "hoax" invented by the Chinese — indicate that he hasn’t bought into the consensus views about climate science and suggest he may welcome such a debate.

A White House spokeswoman did not respond to requests for comment.

EPA spokeswoman Liz Bowman said, "We have nothing to share at this time, and we will share additional details if and when they’re available."

Conservative think tanks and influential Republican donors are anxious to get the process underway.

They contend that critics of mainstream climate science have been marginalized for years, and they see it as a way to undermine EPA’s endangerment finding, which is a scientific determination that greenhouse gases threaten public health and welfare.

Some conservatives have been pressuring Pruitt to overturn that finding, but many acknowledge that he’ll face a tough court battle if he takes on the finding directly (Climatewire, July 18). He’s already been criticized by some who fear he won’t challenge the endangerment finding. Leaving it intact would make it easier for the next administration to roll out new versions of the climate rules the Trump team is working hard to dismantle.

The red team forum may present Pruitt with a middle ground — a way to appease conservatives who want to discredit the endangerment finding while avoiding legal fights for now.

Bob Murray, the CEO of Murray Energy Corp. who’s a key Trump ally on energy issues, said Pruitt told him recently that the red team debate is the first step toward a possible challenge to the endangerment finding.

"They’re laying groundwork for it; they want to do this red, blue study, debate on science before we get there," Murray said of the endangerment finding. "I said, ‘You need to get it done; if you don’t get it repealed, you’re going to have this climate agenda forever. It needs to be repealed’" (Climatewire, Dec. 1).

Myron Ebell, who led the EPA transition team for the Trump administration, sees the red team as a way to help unravel the endangerment finding.

"What we’ve been pushing is that the EPA should grant our petition to reopen the endangerment finding, and they should then put out an advance notice of proposed rulemaking," said Ebell, who’s the director of the Center for Energy and Environment at the Competitive Enterprise Institute.

EPA should then begin its climate science critique as part of its plan to re-examine the finding, he added. "That would put the exercise in a legal framework that could then be used consequentially."

H. Sterling Burnett, a research fellow on environmental policy for the conservative Heartland Institute, said a red team will allow the administration to "make decisions based upon a fuller, more accurate understanding of the state of climate science."

Once that’s done, he said, "there will be little justification for the endangerment finding, then they can safely withdraw it and defend it in court."

The Heartland Institute has been holding closed-door meetings for months to strategize how to push the administration to move ahead with the red team.

Heartland also sent lists of recommendations to EPA for potential members of the red team, according to documents obtained by the Climate Investigations Center and shared with E&E News (Climatewire, Oct. 26).

Despite the support from conservative circles, the exercise presents some political perils, and some say the administration and Pruitt would be wise to steer clear.

"In the case of red team, blue team, we’ll be taking incoming fire all right, but it’ll be completely voluntary. It’ll be like a self-inflicted wound."

One line of attack the administration is already facing is that the operation aims to treat the two sides of the debate as equal. That would give the minority of researchers who question mainstream science a bigger platform.

There are also outstanding questions of who participates and how it would be run.

Pruitt was rumored to be considering Steven Koonin, a former Obama administration energy official, to lead the red team effort. Koonin said in an August interview that he’d consider it if certain conditions were met. His participation would allow Republicans to claim bipartisan support.

Koonin said in August that he’s driven by science, not politics.

"I’ve got no dog in the fight about whether [climate change] is the greatest catastrophe that’s facing the planet or this is a nothing burger," he said. "This is something that is a national issue, and I feel the scientific community has an obligation to see that this is accurately portrayed" (Climatewire, Aug. 7).

Some critics of mainstream climate science have said they’ll only participate if they see it as a serious effort with researchers they deem credible.

"The big question in my mind is to what extent the Heartland Institute has the ear of Scott Pruitt," said Judith Curry, a former professor at the School of Earth and Atmospheric Sciences at Georgia Tech whose name has been circulated as a possible red team member. She has said that having Heartland’s name affiliated with the effort detracts from its credibility.

"I hope this is set up with sensible high-level people who are outside the everyday fray of the debate," she said.

There’s also uncertainty about a possible "blue team" that would defend the mainstream science. Scientists may refuse to participate, arguing that it’s an insincere effort or a waste of time. And the Trump administration may not want those optics.

The administration could also risk unflattering media coverage from the debate itself. Inflammatory assertions from either side of the debate would undoubtedly generate a flurry of news coverage, which could exacerbate criticisms that the administration isn’t doing enough about climate change or generate intense scrutiny of the researchers picked for the red team.

Even some who welcome the debate say it comes with pitfalls.

"It’s a very complicated thing, and it has to be gotten right or it won’t have credibility and it won’t produce a good product," said Ebell.

He doesn’t think EPA is the correct agency to lead the charge, he said, suggesting instead that it be situated within the White House Office of Science and Technology Policy, where the president’s top science adviser typically works.

But Trump hasn’t nominated a leader for his science shop yet. Pruitt, meanwhile, appears eager to get started.

"It’s something we hope to do," he told lawmakers last week. "That would be a process where we would focus on objective, transparent, real-time review of questions and answers around the issue of CO2."