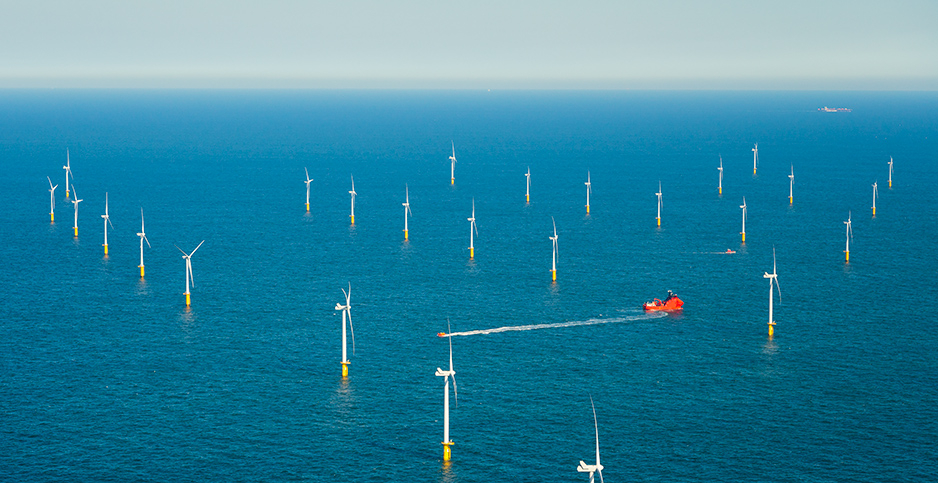 An offshore wind farm in the Netherlands. The Biden administration is poised to approve the first large offshore wind project in the United States as early as next week. Mischa Keijser Image Source/Newscom

The Interior Department is nearing a decision on the first large offshore wind facility in the United States, a verdict that could become a landmark for President Biden’s climate agenda.

Sources said the Bureau of Ocean Energy Management could announce a final environmental review of the project as early as next week.

The final environmental study is the penultimate federal step needed for the project’s construction plan to proceed. The outcome of BOEM’s study is unclear. But in issuing its assessment, BOEM would end a period of considerable uncertainty for offshore wind developers about the federal government’s permitting program.

"Hopefully, this will lead to more holistic development," said Anthony Logan, a senior analyst for power and renewables at Wood Mackenzie, the energy consulting group. "It’s kind of a miracle that the offshore wind sector got to where it has gotten so far."

Northeastern states have championed offshore wind development as a central cog in their climate and economic development efforts. But they have met opposition from fishermen, who fear that the large developments could render huge swaths of the ocean off-limits.

Vineyard’s final environmental review was slated to come out two years ago, but the Trump administration pumped the brakes at the eleventh hour. Interior officials said at the time that a cumulative impact assessment of all offshore wind developments proposed along the East Coast was needed to move forward.

Vineyard’s developers — Copenhagen Infrastructure Partners and Avangrid — asked BOEM to pause its application last winter while it reviewed updates to its turbine model, just weeks before a final decision was scheduled at the end of Trump’s term (Energywire, Dec. 2, 2020). BOEM responded by nullifying the application in full, implying that Vineyard would have to start from scratch if it wanted to proceed with an offshore wind project in the United States.

Biden, by contrast, has promised robust support for offshore wind. He signed an executive order shortly after taking office to double offshore wind capacity as part of a larger package of climate actions to shift the country away from fossil fuels.

A climate action road map released by veterans of the Obama administration in the run-up to Biden’s inauguration called for rapid approval of pending offshore wind permits within the president’s first 100 days.

Vineyard asked the newly minted Biden administration to restart the project where it had left off in January. Amanda Lefton, BOEM’s new director, announced last month that the project’s review process was back on track. Nearly a dozen projects are lined up behind Vineyard.

Logan, of Wood Mackenzie, said it appeared from a distance that Vineyard had bet on the Biden administration giving it a more favorable decision. And that may have paid off, he said.

"I can’t blame them. You are going from this onerous permitting environment [under Trump] to one that is almost the polar opposite — very generous, very supportive — why wouldn’t you wait?" he said.

Vineyard’s proposal has changed considerably since BOEM issued a draft environmental study in 2018. The developer released a new layout of its turbines in 2019 as part of a wider industry effort to coordinate turbine siting to address the fishing industry’s concerns.

Vineyard has also steadily reduced the number of turbines it plans to install, as the size of the individual turbines has grown. The draft plan called for installing up to 100 8-megawatt turbines. Vineyard’s most recent plan calls for using 62 12-MW or 13-MW turbines.

Offshore wind is particularly important to Biden’s climate agenda because it is an area where he does not need congressional approval for major renewable developments.

Nevertheless, challenges loom on the horizon.

The Biden administration is already facing some blowback from the fishing group Responsible Offshore Development Alliance, which yesterday released a letter it sent to Lefton criticizing BOEM for restarting a project that it had terminated just weeks before.

"It would appear that the fishing communities are the only ones screaming into a void while public resources are sold to the highest bidder, as BOEM has reversed its decision to terminate a project after receiving a single letter from Vineyard Wind," the group wrote in a statement.