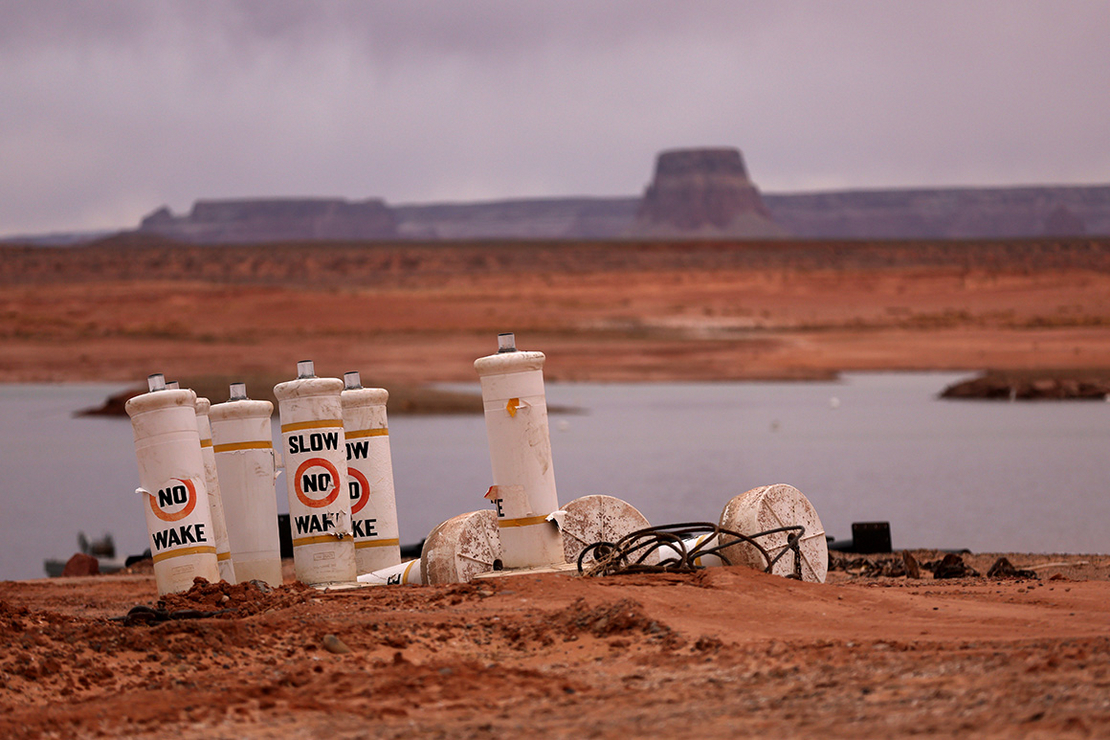 Buoys sit on the beach near the Wahweap Marina at Lake Powell on March 28 in Page, Ariz. As severe drought grips parts of the western United States, water levels at Lake Powell dropped to their lowest levels since the lake was created by damming the Colorado River in 1963. Justin Sullivan/Getty Images

California residents who rely on Colorado River water could see significant cutbacks on the resource next year, as state officials negotiate a reduction plan that could cost billions to save up to 500,000 acre-feet of water.

The Imperial Irrigation District and the Metropolitan Water District of Southern California are expected to put forth a plan on Aug. 16 detailing the reductions, the Desert Sun newspaper in Palm Springs reported.

The agencies, which supply water to Southern California farmers and the greater Los Angeles area, are planning the cutbacks in response to demands from the Bureau of Reclamation.

In June, Reclamation Commissioner Camille Touton announced that the seven states that draw water from the Colorado River Basin would need to cut as much as 4 million acre-feet of water in 2023 in order to maintain water levels in Lake Powell and prevent a shutdown of hydropower facilities (E&E Daily, June 15).

Officials told the Desert Sun the proposed reductions to the two water districts are not final, and total cuts could be closer to 400,000 acre-feet.

“There’s no deal until you have a deal, and there’s no deal yet, so we have targets more than exact numbers,” Metropolitan Water District Colorado River Resources Manager Bill Hasenkamp told the newspaper.

The plan is expected to rely in large part on paying farmers and landowners to forgo planting crops, or to invest in expensive but efficient water systems.

A Reclamation spokesperson referred questions about the Colorado River reductions to the Interior Department.

“Assistant Secretary [for Water and Science Tanya] Trujillo, Commissioner Touton, and Department leaders are hard at work with Basin states to release the updated 24-month study and operating conditions for the Colorado River Basin by August 16,” said Interior spokesperson Tyler Cherry. He did not address a question about the California plan.

That study set to be released midmonth will include predictions for water levels in Lake Powell. The federal bureau has struggled to maintain sufficient water levels in the reservoir in the face of a 22-year drought.

Earlier this year, Interior officials announced “extraordinary actions” to prevent a shutdown of hydropower facilities at the Glen Canyon Dam, boosting water levels by 1 million acre-feet through a combination of holding back water in the reservoir and adding flows from the Flaming Gorge Reservoir in Wyoming (Greenwire, May 3).

Reclamation data showed Lake Powell at an elevation of 3,536 feet as of Monday, about 46 feet above the minimum level required for hydropower operations (Greenwire, Aug. 3).

Agency officials have offered few details about how the federal government could enforce reductions if states fail to offer their own plans to do so.

During a July meeting of the Colorado River Water Conservation District in Glenwood Springs, Colo., a Reclamation official said the agency has not determined whether it could claim flows from the various reservoirs it operates in the state.

“At this point, we are not looking at specific locations,” Reclamation’s Upper Colorado Basin Assistant Regional Director Katrina Grantz told the panel, according to the nonprofit Aspen Journalism. “I would turn it around and say: Are there areas where you locally think there might be areas to conserve?”