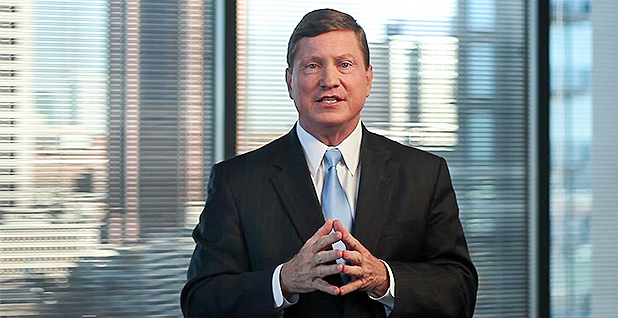 To reach a set level of renewable electricity on the grid, he told E&E News in a recent interview, the federal government could use the Department of Energy to work out regional clean power targets as part of a comprehensive "national energy plan."

Another, "indirect" strategy could be to add a carbon tax, he said.

"I don’t like them as much because they are inefficient," Fanning said. "They do work."

Fanning has floated many ideas for Biden’s sweeping policy reforms to decarbonize the grid, and he recently wrote a two-page letter to the president addressing everything from cybersecurity to environmental justice.

On the one hand, Southern must work with any new administration: Decisions made in Washington flow through to the energy giant’s profits as well as customer bills.

Southern’s Plant Vogtle nuclear expansion project, scheduled to start up later this year, is the result in part of federal policies — and taxpayer-backed loan guarantees — that span several administrations, for example. Plant Ratcliffe, the carbon capture and sequestration-turned-natural gas plant in Mississippi informally known as Kemper, would not have happened without Energy Department support.

But economics have led many electric utilities to move away from coal and add renewable energy to the grid. Most companies, including Southern, want to hang on to natural gas, arguing that it is cost-effective and is needed to ensure grid reliability when solar and wind resources are offline.

That means Southern, which also owns the nation’s largest natural gas distribution company, walks a tightrope when it comes to fossil fuel use.

Biden’s policy proposals also seek to help Black, poor and rural communities that have been historically saddled with polluted air and high utility bills. The problem is especially acute in the South, where 40% of residents qualify for low-income energy assistance, and battling summer heat with air conditioning can send utility bills soaring, especially in older, inefficient homes (Energywire, Aug. 6, 2020).

In his Jan. 4 letter to Biden, Fanning said Southern is "committed to standing with you to advance racial equity."

But states in the South frequently rank at the bottom in energy efficiency measures, and utility regulators who oversee Southern’s electric companies have faced criticism for allowing them to resume electricity disconnections for nonpayment during a pandemic.

In a wide-ranging interview with E&E News, Fanning talked about plans for natural gas, coal’s future, Biden’s agenda, the meaning of "energy justice" and the Obama-era Clean Power Plan, among other topics:

Biden plans to decarbonize the power sector by 2035: What’s needed to get there, and how realistic is it? Is there a broad plan to work with the administration to move the date, let’s say five, 10 years?

That’s right, you’re hitting the nail right on the head here. There are economic consequences. We’ve run our scenarios on different time frames. Frankly, there’s a pretty good-sized economic elbow, if you will, moving from the [2040s] and into the ’30s: a different economic outcome, more expensive. OK, well, maybe it’s worth it, but how do we pay for it? Who shares the burden? These are important policy issues.

The faster you move, that may cause costs to increase. It may impair your ability to move the economy in the long run away from the internal-combustion engine, away from fossil fuels. If electricity becomes 20% more expensive to move sooner, it hurts your ability to penetrate the automobile market.

So we need a completely holistic, global set of policy issues. I’m all in with working with the administration to figuring it out.

How do you handle it so we all don’t go into rate shock?

Another one is direct intervention. I have floated this idea from time to time. It’s pretty controversial, but what the heck.

Say there’s a federal initiative to get to some penetration of renewables; maybe it’s a clean energy standard that has to get implemented on the state level.

Could the DOE create a real national energy strategy to create regions within the United States to set as targets for a generation portfolio? That is a direct way for the federal government and the states to develop a real national energy plan that works for the U.S. That’s pretty controversial, but boy, I think that’s the way to go.

An indirect way is a carbon tax to put in economic signals to incent people. I don’t like them as much because they are inefficient. They do work.

Cheap, plentiful energy — just taxing it to make it more expensive — may not be the right worldwide, competitive economic signal. You may hurt the economy in the long run.

We didn’t support the Clean Power Plan solely not because of any carbon objective. [The plan] rested solely on the idea that it made the Clean Air Act kind of more important than the Federal Power Act. The structure of the United States energy system was defined by the Federal Power Act, which gave the federal government powers in certain areas and the state government power in others.

I think this administration gets that. I think they saw that the Clean Power Plan was a bit of an overreach in that regard. They will propose some ideas that won’t roll over the Federal Power Act.

What stands out to you on Biden’s climate- and environmental justice-focused executive orders that will have the biggest impact on the Southeast?

I don’t think we have a lot of the facilities where there was a minority community that is negatively impacted; I just don’t believe that.

Look at what we do from an environmental standpoint, from an economic development standpoint. Go to Burke County [in Georgia], where Vogtle is: It’s a huge tax base; [there are] great schools, volunteerism.

We have made it our business to be a citizen wherever we serve and make the communities better off from where we’re there. We give [employees] an expectation to do it: It is part of their compensation; it’s their pay; it’s how they get ahead in the company. We have to do this.

The energy justice concept sits completely within that construct. There may be other places in the U.S. where people have to worry about that; I think it’s 100% consistent with our posture.

It’s clear Biden is making equity a priority issue. Where do you go from here? What’s Southern’s role?

This is absolutely one of the policy decisions that people will have to make: If you want to pursue net zero by 2035, and prices rise — say they are 20% [higher] — well, who’s going to bear that cost? Is there a federal subsidy? Is it important enough to the federal government to say, "Let’s keep costs, and we’ll pay for it because the value of reducing carbon is worth that much"?

One [way] says the government will take up the slack toward the lower-income people. Another says to make it more expensive for people who use more energy, a redistribution, if you will.

There’s a lot of different things that people can do. Or they will make the claim that it’s just not worth it.

I think there’s plenty of opportunities in our industry. The big growth would be in transportation fuels. If you start displacing that in a significant way — nasty imported oil with clean electricity — that’s a win-win.

You’re aware of critics who disagree with decisions allowing utility companies to resume disconnections. Utilities want to use that as a last resort — but is there a solution that would be absent Wall Street scrutiny?

I think the solution is best left to the states. We could take federal action, but I think the states have already been managing that issue.

What we’ve adopted with our states [is] to be as liberal as we can on payment plans. Even if it’s a buck a month, if we can just get the kind of support that we need to make that work. The last thing we want to do is cut somebody off. Even from a base business — think about the imperative there: When we cut somebody off, we write them off. It’s always better to get someone to stay there and stay in the game.

There are ways to get around it without cutting people off.

Is Wall Street antsy about the disconnections?

The numbers are so small to us that nobody has been materially concerned about it.

There’s a notable shift away from coal. State regulators are likely to push back out of concern for reliability as well as jobs. Given the new administration, where is the discussion on that with states?

What we’re seeing are clear economic signals that this coal fleet can be transferred to something that is lower carbon in nature. If we’re smart about it, we can use the [operations and maintenance] savings that otherwise would have supported the coal fleet to pay for some of the new generation we may bring in, like much bigger penetration of renewables or hydrogen-capable natural gas combined-cycle [power plants].

There’s a whole lot out there that we could be pursuing, and the trade-off would be to move further away from coal and toward these other technologies, and I think the economics will support it.

Our states have a process that they go through, have already started to. There’s kind of a new concept we created called inactive reserve: Let’s not run Bowen 1 and 2 [coal-fired power generators] in economic dispatch. Let’s leave them there; we’re not going to tear the plants down, and only use that plant in the event we have a resilience emergency.

If there’s a clear emergency, we would get approval to turn those plants on, and within a week, we could have more capacity on the system.

Because natural gas is so plentiful and so cheap, it is really important to think about that in the fuel structure for the nation. Now, it does emit carbon, so what do you do?

You’ve got to be able to design new technology, and we’re doing this in Alabama, where we pre-think adding combined-cycle carbon capture and storage. The other alternative is making it capable of fuel blending, particularly with hydrogen.

When we contemplate adding CCS to new combined cycle, it does require some design changes, and that is what you’re seeing right now in R&D.

Is this an industrywide challenge?

Technically, CCS is a right-now thing. Economically, it depends on a host of factors including a carbon tax.

You tell me what the policy choices are; I’ll tell you what technologies are way in the money.

When you think about Southern as I took it over [in 2010], we had committed to great event risks: a nuclear plant, first-of-its-kind plant at Plant Ratcliffe. We were putting billions and billions of dollars at risk.

I think Vogtle will be a resounding success. With Kemper [Plant Ratcliffe], natural gas went from over $10 to about $3 where the break-even was $6. It put the company under an enormous strain.

I’ve been the most proud about sustaining the basics of the company. And the social impact: sustaining and improving our standing there. And I’ve tried to put things in place — time will tell — so that our culture is more resilient and better.

I love Southern’s cards as I leave.

I am not at all afraid from the Democrats and what they want to do from a policy standpoint. I think we can support their policy positions and be a great partner. I’m all in.