Southwestern U.S.: from laggard to leader on climate 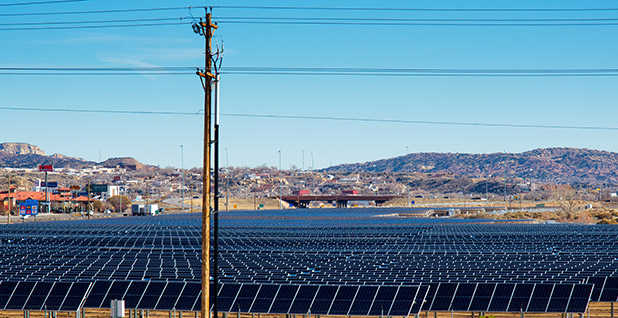 The Southwest became the center of U.S. climate action yesterday, as New Mexico lawmakers voted to decarbonize their state’s electric grid and Nevada’s governor announced his support for bills to expand renewable energy and enshrine carbon reduction targets in law.

The developments represented a striking shift for American climate efforts. Climate policy, long dominated at the state level by California and a handful of Northeastern states, had stagnated in Nevada and New Mexico until recently.

Now the pair of Southwestern states are poised to take far-reaching efforts to curb emissions, delivering climate hawks one of their most significant wins since President Trump took office two years ago.

"I think people should note these are states in the middle of the country, purple states, but they have incredible renewable resources. The previous political leadership ignored that potential," said Noah Long, who leads the Natural Resources Defense Council’s climate and energy program in the interior West.

The vote in New Mexico was particularly notable. The state has long relied on coal for a significant portion of its electric supplies, and it’s home to significant oil and gas reserves. It was governed until last year by Susana Martinez, a Republican opposed to climate action.

Gov. Michelle Lujan Grisham, a Democrat, came to power last fall on a pledge to boost renewables and slash emissions while cementing Democratic control in Santa Fe, where the party already controlled the Legislature.

House lawmakers followed their Senate counterparts yesterday in approving the "Energy Transition Act," paving the way for the measure to be sent to Lujan Grisham’s desk.

The bill would require half of the state’s electricity to come from renewables by 2030 and all of the state’s power to come from zero-carbon resources by 2045. The power sector accounted for nearly half of New Mexico’s 48.4 million tons of carbon pollution in 2016, making it by far the largest source of greenhouse gas emissions in the state, according to the most recent federal figures.

The legislation’s passage makes New Mexico the third state after California and Hawaii to commit to decarbonizing its electric sector. Washington and New York are among the states expected to follow suit in the coming months.

"The Energy Transition Act is a promise to future generations of New Mexicans," Lujan Grisham said in a statement released minutes after the House vote. "When we were presented the chance to move toward cleaner sources of energy, we took it, boldly charting a course to a carbon-free future, permanently centering our commitment to lower emissions and setting an example for other states."

To the northwest, Nevada Gov. Steve Sisolak (D) signaled that his state would not be far behind. In a press conference hosted by the Nevada Conservation League, Sisolak said his state would be the 23rd member of the U.S. Climate Alliance, a coalition dedicated to the terms of the Paris climate accord.

The governor also announced his support for boosting the state’s renewable portfolio standard to 50 percent by 2030 and placing the emission reductions envisioned by the Paris Agreement into law.

"The lack of recognition from climate change, yet alone its dramatic impacts, at the federal level means our state and local governments need to step up and lead on this issue," Sisolak told the gathering.

The developments in Nevada mirror those in New Mexico. Democrats already held sway of the Legislature in Carson City before Sisolak won election in November. He takes over from former Gov. Brian Sandoval, a Republican who supported solar development but vetoed an enhanced RPS in 2017 (Climatewire, June 20, 2017).

Sisolak’s support provides a boost for efforts to raise the state’s RPS from 25 percent to 50 percent, said state Sen. Chris Brooks (D), who authored the 2017 bill and plans to refile a new version this session.

Brooks also penned the proposal to cement the Paris emission reduction targets into law. That bill calls for curbing emissions 28 percent of 2005 levels in 2025, 45 percent in 2030 and net-zero emissions by 2050.

Nevada’s emissions had already fallen 37 percent of 2005 levels by 2016, according to data from the U.S. Energy Information Administration.

"Having it in statute gives long-term direction to agencies and future legislatures on the goals of the state of Nevada and allows for long-term plans to be put in place," Brooks said in an interview.

It’s not clear where the state’s powerful gaming industry will come down on the question of boosting the RPS. Several large gaming companies already have carbon reduction targets in place, and some have taken steps to leave NV Energy’s system in recent years. Under Nevada’s current law, large consumers that leave the utility’s system are subject to the RPS rate at the time of their departure.

Brooks said his hope is to implement a uniform RPS that applies to power companies and large consumers alike. He expressed hope the industry would ultimately support the measure, pointing to its current commitment as a sign it can be brought on board.

The Nevada Resort Association, a trade group representing the industry, said in a statement that it appreciated Sisolak’s environmental commitments and noted the efforts its members have taken to reduce emissions.

"We look forward to continuing to be a part of the conversation as various ideas move through the legislature and more details emerge," Dawn Christensen, a spokeswoman for the association, said in an email.

The shift in both states has been greatly aided by power companies’ transition away from coal toward renewables. In Nevada, NV Energy was once viewed as an enemy of residential solar development after backing state regulators’ attempt to end the practice of net metering. But the utility acquiesced to efforts to restore net metering and has sought to tout its renewable ambitions in recent months.

Public Service Company of New Mexico, the state’s largest utility, had already pledged to divest itself of all its coal assets by 2031. The company expressed some uneasiness with the prospect of higher renewable mandates called for in the "Energy Transition Act" but ultimately signaled its support for the legislation (Energywire, Feb. 28).

"The Southwest is awash in renewable energy," said Julie McNamara, a senior energy analyst at the Union of Concerned Scientists. "The access to cheap solar energy makes it nearly impossible to argue for anything else. It’s just such a great business case, and I think part of what’s happening in the Southwest. These states are seeing these incredibly low requests for proposals come in, and progress begets progress. There seems to be a certain amount of momentum growing across the region."

Under the legislation, the state would back Public Service Company of New Mexico’s bonds to pay the outstanding debt on its coal units. The state-backed bonds would cut the power company’s debt payments in half. The bill requires that some of those savings be redirected to San Juan County, which is home to a large coal plant and mine by the same name. The plant is scheduled to close in 2021.

The legislation also calls for building 450 megawatts of renewable capacity in the county to help replace lost tax revenue from closing coal operations.

"These policymakers this year are grappling with how to balance the challenges and opportunities of this transition," McNamara said. "The shift away from coal is challenging for the workers and communities where these plants are located. But there is no reason to duck the reality that this shift is happening."

Correction: A previous version of this story incorrectly reported the Nevada capital. It is Carson City.