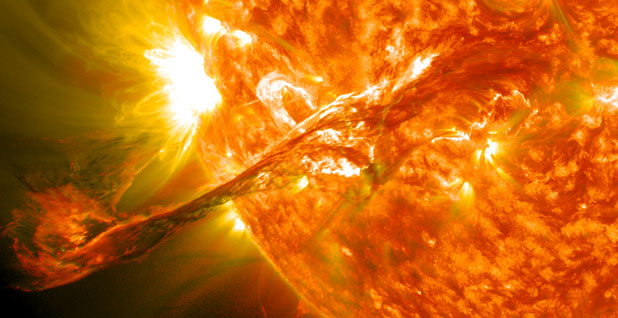 U.S. space scientists are monitoring a series of high-energy eruptions from the sun to determine if they will threaten power grids as Hurricane Irma bears down on the Eastern Seaboard.

The Space Weather Prediction Center (SWPC) yesterday issued an alert for a midrange burst of electromagnetic energy that occurred Monday, with an expected impact on North America yesterday and today. The prediction center is part of NOAA.

The burst, called a coronal mass ejection (CME), could create "elevated radiation risk to passengers and crew in high-flying aircraft at far north or south latitudes," NOAA said, with a slight chance of isolated interference with GPS data. Its main effect was expected to be an unusually wide display of aurora borealis — the shimmering green northern lights — above the top layer of U.S. states, NOAA said.

NOAA is also watching a very large solar flare that burst from the sun yesterday. It is accompanied by a fast-moving CME pulse, but preliminary analysis yesterday indicated it will not pose a threat to networks, said Douglas Biesecker, who oversees operation of the Deep Space Climate Observatory, a cornerstone of NOAA’s early warning satellite network for solar events. Flares may or may not be accompanied by a CME pulse.

Yesterday’s larger flare, which occurred shortly after 8 a.m. EDT, was rated at X9.3 magnitude and was the highest since 2006. It caused intermittent widespread disruption of radio communications yesterday, including high-frequency transmission often used by infrastructure operators and first responders to communicate during hurricanes and other emergencies. That flare was preceded by a smaller one yesterday in an unusual flurry of solar activity, SWPC said.

Solar storms threaten emergency communications and GPS satellites and, in extreme cases, would trigger ground currents that would shut down power grids over a large area. A March 1989 solar event caused a violent magnetic disturbance that took down the entire power network in Quebec for more than nine hours and disrupted grid operations in the United States, although no blackouts occurred. Solar storms in 1859 and 1921 are estimated to have hit with much greater force than the Quebec event.

Electric power industry engineers and outside experts continue to debate the damage that could result from a "once-in-a-century" CME pulse, with the industry arguing that a blackout would come rapidly, before long-lasting damage to grid transformers could occur, and critics challenging that assessment.

The Federal Energy Regulatory Commission has issued a pair of regulations requiring high-voltage grid utilities to create defenses against a massive solar flare, which could include deliberately blacking out electrical service in vulnerable areas to protect transformers from fatally overheating until the pulse’s impact has passed.