‘Sparks will fly’ — Kavanaugh faces off against senators 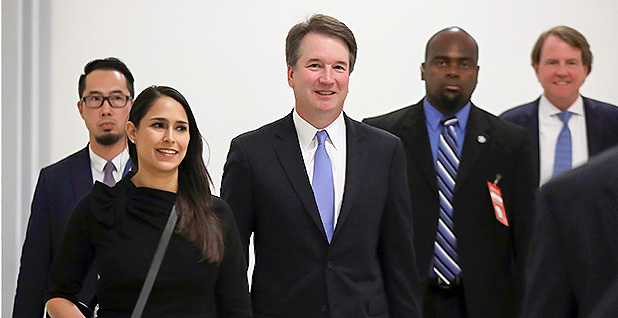 Supreme Court nominee Brett Kavanaugh formally goes before senators this week at his confirmation hearings, a multiday event that will likely produce a lot of fireworks but change few, if any, minds.

The biggest draw — the questioning of Kavanaugh — will begin tomorrow and is expected to last two days. It will be followed by testimony from outside witnesses.

"There will be sparks at this hearing. Sparks will fly," Sen. Richard Blumenthal (D-Conn.) said Friday.

Judiciary Committee Democrats are preparing to throw everything but the kitchen sink at Kavanaugh, a prominent judge on the influential U.S. Court of Appeals for the District of Columbia Circuit, in the hope of landing a fatal blow that will sink his nomination.

They’re planning to focus on abortion, gun rights and presidential power and are bringing in a host of witnesses to speak on those issues. Those expected to testify include Nixon White House Counsel John Dean and Aalayah Eastmond, a survivor of the February school shooting in Parkland, Fla.

Kavanaugh will likely face many questions about his views on existing Supreme Court precedents, such as Roe v. Wade, and when precedents should be overruled. But if past judicial nominations are any indication, he’ll frustrate Democrats who ask such questions by explaining that he doesn’t want to give anything away about how he might judge a particular case before the court.

Much of the hearing is also likely to focus on Kavanaugh’s work prior to his 12-year tenure at the D.C. Circuit. Kavanaugh got his political start as one of the lead lawyers for independent counsel Kenneth Starr’s investigation of President Clinton; he would go on to serve in the George W. Bush White House, including as assistant to the president and staff secretary.

"We’re hoping for a hearing that lets the public thoroughly understand where he is on major issues that the Supreme Court will decide," said Senate Minority Whip Dick Durbin (D-Ill.), a member of the committee who has raised concerns about Kavanaugh’s record, both in the Bush administration and on the D.C. Circuit.

Democrats have also invited speakers on environmental regulations and administrative law, signaling that such issues are part of their broader strategy to knock down the Kavanaugh nomination.

Still, green issues may get more play this time around, as Kavanaugh’s long record on the D.C. Circuit provides a lot of fodder and includes decisions on topics such as climate change, air pollution rules, ethanol mandates and Endangered Species Act decisions.

Kavanaugh — who would fill the seat left vacant by the retirement of Justice Anthony Kennedy, long considered the court’s swing vote — could have an almost immediate impact on environmental law. If he’s confirmed by Oct. 1, he would likely participate in a key case testing wildlife agencies’ ability to designate critical habitat for imperiled species (E&E News PM, July 9).

Foes have focused on what they see as Kavanaugh’s natural tendency to question federal agency authority and side with corporations and industry groups. They are afraid that Kavanaugh would give the Supreme Court the fifth vote it needs to roll back environmental and public health regulations.

Last week, Public Citizen released a report finding that Kavanaugh sided with corporations or states, and against federal agencies or environmental groups, in 11 of 13 environmental cases decided in split decisions at the D.C. Circuit. The report also argued that Kavanaugh is inconsistent in that he defers to federal agencies when public interest groups challenge their actions.

This past week has seen a flurry of letters to senators, both those opposing the nominee and those calling for his confirmation. Off Capitol Hill, the League of Conservation Voters launched a $200,000 ad campaign with a focus on Nevada, Maine and Alaska — all states where greens have hoped to persuade vulnerable and moderate Republicans to oppose the nominee.

EPA’s decision last week to reconsider an Obama-era rule aimed at limiting mercury and other toxic air pollution emissions from power plants only emboldened environmental groups opposed to Kavanaugh. While on the D.C. Circuit, Kavanaugh wrote a dissenting opinion that was later mostly adopted by the Supreme Court finding that EPA unlawfully failed to consider costs when deciding whether to regulate power plants.

Still, neither greens nor Democrats have succeeded at slowing Kavanaugh’s inevitable progress through the Senate until after the midterm elections.

Judiciary Chairman Chuck Grassley (R-Iowa) has ignored several calls by Democrats to delay this week’s hearings, including a request by Democrats on the Senate Environment and Public Works Committee who said they needed more documents from Kavanaugh’s time at the White House to be able to fully review the nominee’s environmental record.

"Any confirmation hearing or vetting process that fails to include and consider Judge Kavanaugh’s complete environmental record, specifically his time as White House staff secretary and White House counsel, is a hearing that would be uninformed, illegitimate and an abdication of our constitutional duties," EPW ranking member Tom Carper (D-Del.) and other committee Democrats said.

Grassley also rebuffed calls to delay the hearing based on President Trump’s legal woes. Following the guilty plea by former Trump attorney Michael Cohen and the federal convictions of former campaign manager Paul Manafort, Senate Minority Leader Chuck Schumer (D-N.Y.) and all 10 Democrats on the Judiciary Committee called on Grassley to push back the start of this week’s hearing.

A handful of Democrats, including Judiciary Committee member Sen. Mazie Hirono of Hawaii, canceled planned meetings with the nominee.

"It’s absolutely not clear to me what one has to do with the other," Grassley said on the floor last week. "But this is by my account at least the third strategy Democratic leaders have used to tried to delay Judge Kavanaugh’s hearing."

Some Democrats have taken heat back home for their decisions to not meet with the nominee. Sen. Jon Tester (D-Mont.) was challenged last week by his Republican opponent, Matt Rosendale, on his failure to meet with Kavanaugh. The Montana Senate race is considered one of the top contests this fall.

Republicans are still pushing to have the conservative judge approved for the start of the Supreme Court’s fall term.