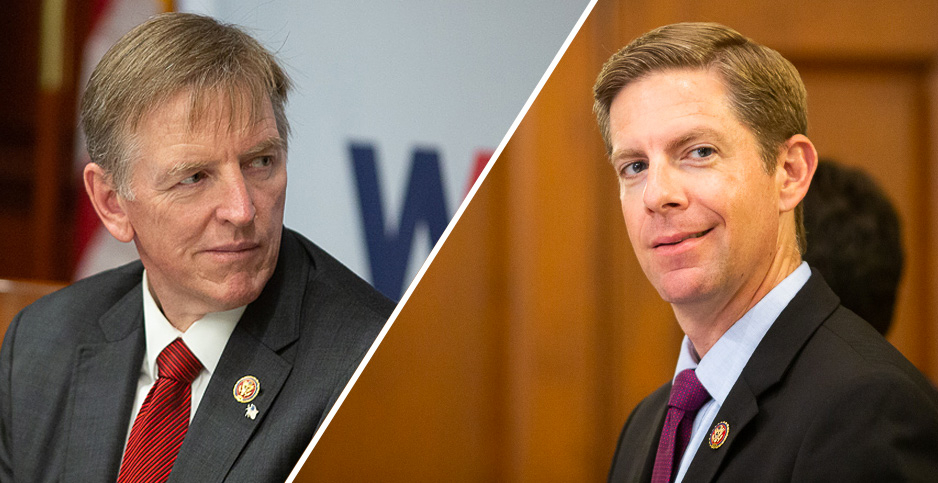 A partisan fight is brewing between Republican Rep. Paul Gosar of Arizona and Democratic Rep. Mike Levin of California over ownership of what was once bipartisan renewable energy legislation.

At issue is the "Public Land Renewable Energy Development Act," which Gosar has sponsored for eight years through four congressional sessions, including with Levin in 2019.

Indeed, the Gosar-Levin sponsored bill, H.R. 3794, was approved by the House Natural Resources Committee in 2019.

What’s more, elements of the bill — including a nationwide goal for the Interior and Agriculture secretaries to issue permits approving wind, solar and geothermal power projects capable of producing 25,000 megawatts of electricity by 2025 — were included in a massive fiscal 2021 spending package that Congress approved last year.

But yesterday Levin reintroduced the bill measure himself as the sole sponsor.

Gosar then filed an identical version of the bill yesterday, naming himself as sponsor. Republican Rep. Bruce Westerman of Arkansas, the Natural Resources Committee’s ranking member, along with Reps. Pete Stauber (R-Minn.) and Doug Lamborn (R-Colo.) are listed as co-sponsors of the Gosar bill.

Why separate but near-identical bills that mirror legislation the two happily co-sponsored in 2019?

Gosar’s office said it has to do with Levin’s unwillingness to make Gosar an original co-sponsor, even though the two worked on the legislation together.

Levin refused to include him on the bill because of the lawmaker’s vocal criticisms of the Biden administration and its focus on climate change as it relates to the use of federal lands, Gosar’s office said.

"This is about Mr. Gosar being able to participate in the bill he’s sponsored for eight years now," a spokesperson told E&E News.

Eric Mee, a spokesman for Levin, confirmed that Levin did not want Gosar as an original co-sponsor of the bill, and tied it to the broader and ongoing partisan spat over the Jan. 6 Capitol Hill insurrection — and Republicans downplaying the significance of the attack by pro-Trump supporters.

In essence, having Gosar as an original co-sponsor would hurt the bill’s chances of approval.

"Congressman Levin invited Congressman Gosar to co-sponsor the bill like any other colleague," Mee said. "However, Congressman Levin is determined to get this important legislation to President Biden’s desk, and it’s clear that having Rep. Gosar as a co-lead could be detrimental to that goal, particularly in the wake of the events of Jan. 6."

Mee added that Levin’s version of the bill has been endorsed by a "broad range" of stakeholders, including the National Association of Counties, the Outdoor Alliance, the Solar Energy Industries Association and the Natural Resources Defense Council.

"Our public lands have incredible potential for wind, solar, and geothermal energy development, and we must harness that potential as part of our clean energy future," Levin said yesterday in a statement.

"My bill will expedite that critical renewable energy development, create good-paying jobs in communities across the country, and ensure we remain good stewards of our public lands," Levin added. "I’m proud to reintroduce this bipartisan legislation, and I look forward to advancing it as soon as possible."

That bill is scheduled to be considered at a Natural Resources Subcommittee on Energy and Mineral Resources hearing Monday that’s focused on expanding renewable energy development on public lands.

But the Natural Resources Committee spokesperson for Democrats on the panel said Levin’s version of the bill — not Gosar’s — will be considered at the hearing, even though both are identical.

Gosar, in a press release announcing introduction of his version of the bill, asserted that it will be the topic of the Monday subcommittee hearing.

"He introduced a separate, GOP-only version of the bill, which is not the one being considered" on Monday, a spokesperson for Democratic members of the Natural Resources Committee said in a text.

The bill seeks to promote renewable energy development through, among other things, streamlining the federal permitting process and establishing a revenue-sharing plan that would give a portion of fee revenues generated from wind and solar projects on federal lands to states and counties.

Though Gosar has been a particularly sharp critic of key elements of President Biden’s agenda, and of the administration’s public lands management policies to date, previous versions of the bill have garnered widespread bipartisan support.

The most recent version of the bill, in 2019, had 70 co-sponsors, including many Democrats.

Gosar has remained steadfast in his commitment to the legislation.

"I have led this overwhelmingly bipartisan bill for the last eight years, and while much of the bill was passed at the end of last year, this legislation will finish the job we have started," he said in a statement.