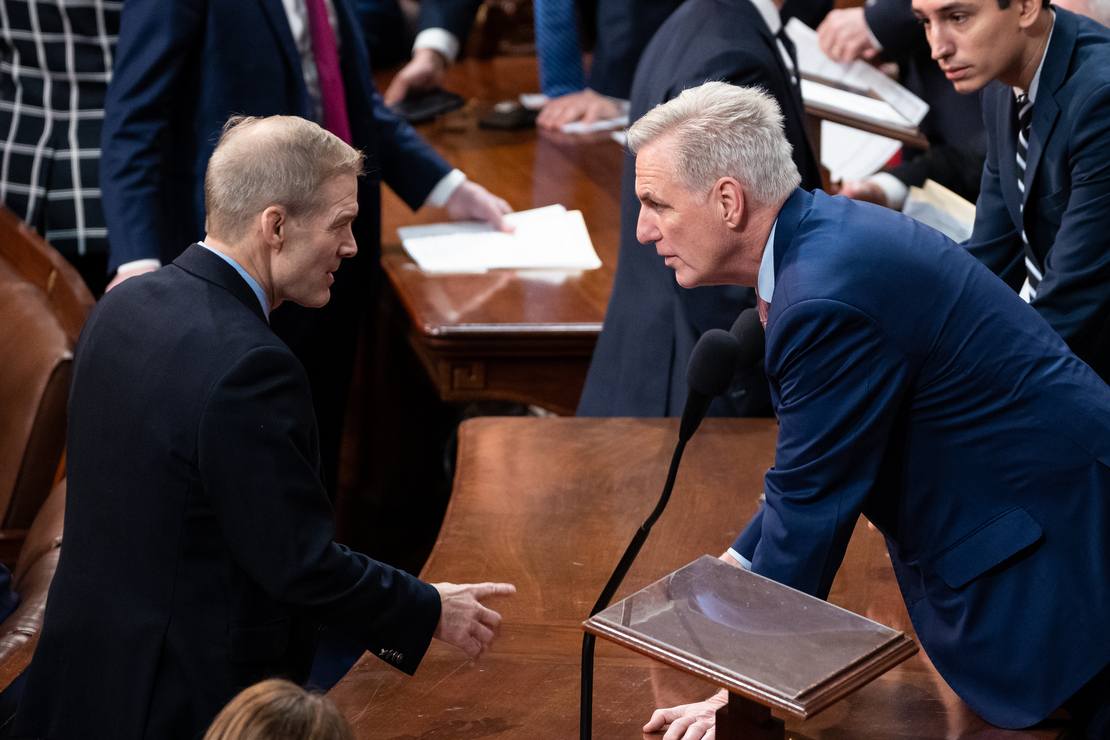 Hours after the opening of the 118th Congress, House members appear no closer to selecting a new speaker to preside over the legislative body and lead the new Republican majority.

Heading into the 4 p.m. hour Tuesday, lawmakers were staring down a third round of voting in an attempt to give one individual the necessary majority of votes to assume the top job, prolonging the proceedings beyond a first ballot for the first time since 1923.

Rep. Kevin McCarthy (R-Calif.), nominated for the speakership by his conference late last year, is refusing to step aside, pledging to remain a contender for the job for as long as it takes for his opponents to give up their fight.

“I know the path” to victory, he insisted today.

But it’s not clear what that path looks like, or at what point he will be forced to declare defeat. He can only afford to lose four votes, and on the first two ballots so far, he has lost 19 — the same members both times.

McCarthy has already made any number of concessions to conservatives, and in order to win over some holdouts, he’ll have to make more deals, including promising votes this year on term limits, a balanced budget and a very specific border security bill championed by Texas Republicans.

In the meantime, the business of the House of Representatives cannot begin until a speaker is selected — lawmakers cannot be sworn in, legislation cannot be passed and committees cannot be convened. Members cannot even adopt a package of rules to govern House operations.

In the first round of voting on the House floor, 19 Republicans voted for someone other than McCarthy, with choices ranging from Rep. Andy Biggs (R-Ariz.), former Rep. Lee Zeldin (R-N.Y.) and incoming House Judiciary Chair Jim Jordan (R-Ohio).

As the second round of voting was about to get underway, Jordan delivered an impassioned speech on behalf of McCarthy, imploring colleagues to rally around the outgoing House minority leader in order to pass legislation to improve border security, tackle inflation and conduct vigorous oversight of the Biden administration.

“We need to rally around here, come together and deal with these three things, because this is what the people sent us here to do,” Jordan said.

But the same 19 Republicans still opposed McCarthy, this time all coalescing behind Jordan.

Rep. Matt Gaetz (R-Fla.), who nominated Jordan for speaker Tuesday afternoon, called him “the most talented, hardest-working member of the Republican conference, who just gave a speech with more vision than we have ever heard from the alternative.”

Gaetz added that Jordan was “humble,” and “maybe the right person for the job isn’t someone who wants the job.”

“The leading vote-getter for the Republican Party would do or say anything to win. That desperation has set in, where his life’s ambition has been for this job. That’s part of what makes him wrong for the job,” said Good of McCarthy.

In Jordan, Good insisted, “we want a reluctant warrior.”

Jordan voted for McCarthy in the second ballot.

If McCarthy remains unable to win the majority of House votes on the third ballot, he has some options. He can continue to force the chamber to remain in session to keep voting until dissenters crack. The House can also adjourn or go into a recess to allow for backroom negotiations.

All the while, Democrats continue to be united around their choice for speaker, incoming Minority Leader Hakeem Jeffries (D-N.Y.).

In fact, it’s the first time in the last decade at least that there has not been a single symbolic Democratic defection for their party’s leader during the live roll call speaker vote that kicks off each new Congress.

“We are unified behind a speaker,” said House Democratic Caucus Chair Pete Aguilar of California. “We’re going to stay here to get this done. We are unified, and we’re all going to support Hakeem Jeffries for speaker, the lead vote-getter.”

Before the third round of voting was set to begin Tuesday, it was incoming Majority Leader Steve Scalise’s turn to rally Republicans behind McCarthy, bringing members to their feet in applause by promising to pass legislation to lower gas prices and boost U.S. energy independence.

“We can’t start fixing these problems,” the Louisiana Republican said, “until we elect Kevin McCarthy as our next speaker.”