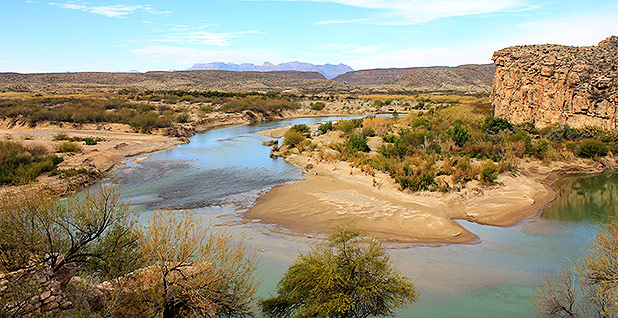 Texas and New Mexico are battling over water rights in the Rio Grande Basin, shown here at the U.S.-Mexico border. Photo courtesy of Good Free Photos.

An interstate dispute between Texas and New Mexico will continue to play out in the Supreme Court after a special master yesterday recommended that justices deny New Mexico’s bid to dismiss the case.

Supreme Court justices in 2014 appointed the special master, A. Gregory Grimsal, to oversee the legal battle between the two states over water rights to the Rio Grande.

Along with denying New Mexico’s motion to dismiss the case, the special master yesterday also recommended denying motions by two irrigation districts to intervene in the dispute.

New Mexico, however, presented "major legal issues that are critical to the ultimate resolution of this matter" in its motion to dismiss, Grimsal said in the 351-page document.

If the court accepts the special master’s advice, the case will move to discovery, the period in which parties gather evidence before trial.

"Texas looks forward to the Supreme Court’s adoption of the Special Master’s recommendations, the presentation of evidence to the Special Master and ultimately winning the lawsuit," said Texas Commission on Environmental Quality Chairman Bryan Shaw in a statement. "I have every confidence that Texas will prevail in this matter."

The dispute between the two states involves the 1938 compact between New Mexico, Texas and Colorado and approved by Congress to apportion water in the Rio Grande Basin. Water in the basin flows from Colorado through New Mexico and into Texas before forming the U.S.-Mexico border.

Texas’ lawsuit in the Supreme Court claims that New Mexico is violating the compact by diverting water before it crosses into the Lone Star State.

Although the United States is not a signatory to the compact, the Obama administration had filed court documents supporting Texas’ claim.

According to Texas, the compact mandates the diversion of a certain amount of water to New Mexico’s Elephant Butte Reservoir, a part of the Rio Grande Project. The state argues that the water must be allowed to flow from there unimpeded through southern New Mexico into Texas.

The lawsuit comes as rapid population growth and drought conditions have put a strain on the Lone Star State’s water supplies.

New Mexico moved to dismiss Texas’ complaint for failure to state a claim under the 1983 compact’s terms. New Mexico says the compact didn’t require it to guarantee water deliveries to the Texas border or to prevent the diversion of water after New Mexico has delivered it at the Elephant Butte Reservoir.

New Mexico said its only duty was to deliver water to the reservoir. From there, the state argued that its own laws — not the 1938 compact — govern the distribution of water from the reservoir within its borders.

"The equitable apportionment achieved by the 1938 Compact commits the water New Mexico delivers to Elephant Butte Reservoir to the Rio Grande Project," Grimsal wrote. "That water is not subject to appropriation or distribution under New Mexico state law."

New Mexico had also sought to dismiss the United States’ claims in support of Texas, arguing that the federal government was attempting to sidestep an unfavorable ruling on groundwater rights in New Mexico court (Greenwire, March 12, 2014).

The special master recommended that the Supreme Court hear the U.S. claims even though the high court doesn’t have exclusive jurisdiction.

"The resolution of the 1938 Compact claims made by Texas and the federal reclamation law claim made by the United States involve the same parties, discovery of the same facts, and examination of similar, if not identical, issues," Grimsal said.

"I have said from the beginning of this case Texas was right in pursuing litigation especially after discussions with the New Mexico Attorney General have failed," Gordon said in a statement. "This report defines the parties to the litigation and provides a strong foundation on which Texas has built its case. We are ready to move the case forward."