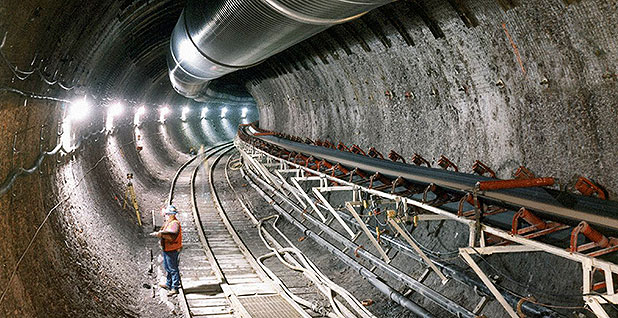 An exploratory tunnel at the Yucca Mountain nuclear waste site. Photo by the Nuclear Regulatory Commission, courtesy of Flickr.

The impasse over how to dispose of vast quantities of highly radioactive nuclear waste piling up at power plants around the country may flare up in the coming weeks, with key House and Senate lawmakers eyeing the appropriations process to jump-start debate.

For years, Senate appropriators have included language in spending legislation for the Department of Energy to initiate a pilot project for consolidating power plant spent nuclear fuel at an interim storage site determined through "a consent-based process."

With the current continuing resolution funding the federal government set to expire at the end of April, Senate Energy and Water Development Appropriations Subcommittee Chairman Lamar Alexander (R-Tenn.) signaled last week the provision could be revived in talks with the House.

"I would like to see that," said Alexander. He said ranking member Dianne Feinstein (D-Calif.) was keen on the language too.

While Rep. Mike Simpson (R-Idaho), chairman of the House Energy and Water Appropriations Subcommittee, has also supported interim storage, the provision has repeatedly failed to make it into law.

Many House lawmakers and leaders fear that any interim facility would become the de facto permanent repository for nuclear waste instead of Yucca Mountain, Nev., which President Obama canceled early in his administration.

Former House Energy and Commerce Chairman Fred Upton (R-Mich.) and Subcommittee on Environment Chairman John Shimkus (R-Ill.), an ardent Yucca backer, have been among the most ardent opponents of the Alexander-Feinstein language.

"Shimkus and I were always fearful that interim would jump ahead of permanent, and we were bound and determined not to let that happen because we would never get permanent done," Upton said last week.

The House’s price for accepting the Alexander-Feinstein pilot program was the inclusion of funds to continue the Yucca Mountain project. But that was not a price former Senate Minority Leader Harry Reid (D-Nev.), one of Yucca’s greatest foes, was willing to pay.

Shimkus earlier this month said he would "entertain options" for interim storage, provided there was a long-term solution for disposal. In the coming months, he plans to move legislation addressing outstanding land and water issues surrounding Yucca (E&E News PM, March 1).

On Friday, Shimkus reiterated the same quid pro quo. "Our consistent message is if we want to move on interim storage, we’ve got to move forward on Yucca," he said in an interview.

With Reid out of the picture, money for Yucca and the Senate’s pilot project program could materialize as early as next month, when appropriators hope to assemble an omnibus spending bill to close out fiscal 2017, Simpson said Friday.

"I’d be willing to do that," he said. "I don’t know if we can get it done in the omnibus or minibuses or whatever happens, but certainly we’ve got to resolve this in the [fiscal 2018] budget. But if we can do it sooner, that’s fine with me."

Feinstein last week said the House’s past rejection of interim storage was "retribution" over Obama’s decision to end the Yucca Mountain project. Asked if Reid’s retirement would facilitate interim storage this year, Feinstein paused before answering.

One wild card is that no one seems to be entirely clear about what Energy Secretary Rick Perry’s views are on the nuclear waste standoff.

The former Texas governor and GOP presidential candidate sidestepped questions about Yucca Mountain during his January confirmation hearing, although conceded that as governor, he was open to hosting a high-level waste site (E&E News PM, Jan. 19).

"I told him after he had a couple weeks on the job, I’d give him time to catch his breath, I’d look forward to talking with him about it," he said.

"That’s as much as we know right now," Sandoval said in a brief interview on Capitol Hill, adding that he hadn’t yet discussed Yucca with President Trump, who owns a hotel in Las Vegas (Greenwire, Jan. 10).

DOE did not respond to a request for comment for this story, but in written responses to questions for the record, Perry told Sen. Catherine Cortez Masto (D-Nev.) that upon confirmation he would "conduct a thorough review of these issues, listen to all of the affected state governments, local governments and stakeholders, and develop a strategy for moving the country forward on this issue."

Responding to a question from Sen. Ron Wyden (D-Ore.) on whether states should have more say on nuclear waste siting, Perry wrote that "decisions about storing and managing radioactive waste must respect a strong role for states."

Cortez Masto told E&E News last month that she decided to vote to confirm Perry after a private meeting showed he "understood the concept of consent-based siting and all the key stakeholders coming together to weigh in whether they’re going to accept it or not."

Even with Reid gone, steering new money to Yucca Mountain and the interim storage program envisioned by Alexander and Feinstein is far from a slam dunk.

Two years ago Sen. Tom Udall (D-N.M.) forced an unsuccessful vote to strip the interim storage provision from the Senate’s energy and water spending bill because a private firm expressed interest in hosting such a facility in his home state.

Last week, Udall said the Energy and Natural Resources Committee should be leading the debate, rather than the Appropriations Committee (E&E News PM, May 21, 2015).

"I worry about changing the high-level waste act without full hearings," he said in an interview, speaking about the Nuclear Waste Policy Act. "You’re basically subverting an act that’s been in place for a long time. I would much rather see the authorizing committees have full hearings."

While House Republicans have raised similar concerns, Simpson last week said he was OK with the limited pilot project envisioned by his Senate counterparts.

"There’s a difference between doing a pilot program and doing it on a large scale," he said. "What Lamar wants to do is do the pilot program, which is OK. And we wouldn’t do anything in there that would override or pre-empt the authorization committees. And we’ve told them that.

"I don’t know for sure but I think they’re probably OK with that," he said, "as long as they have the ability to do authorization."