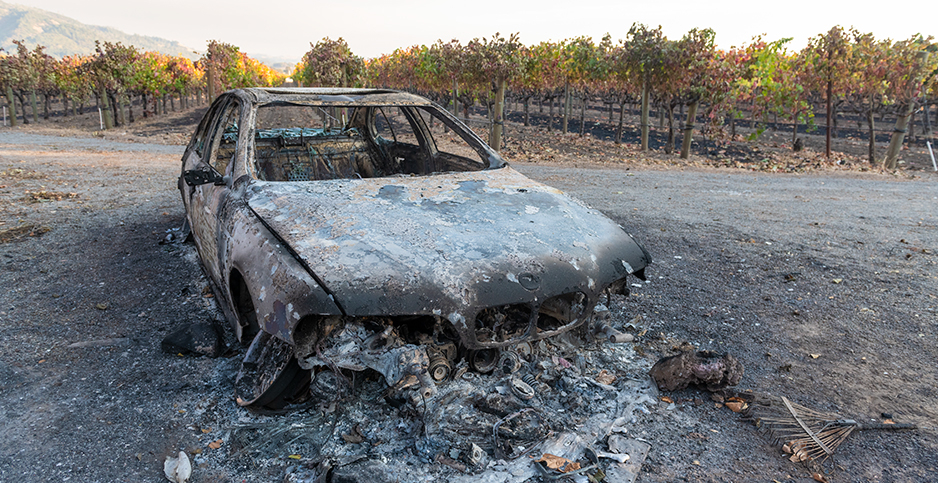 A burned car is seen near Geyserville, Calif., which was under a mandatory evacuation order during the Kincade Fire. Yichuan Cao/Sipa USA/Newscom

SAN RAFAEL, Calif. — Two major wildfires that are scorching California and leaving millions of people without power show how the state has become the nation’s epicenter of fire damage.

Since 2014, California has consumed 88% of the money given to states by the Federal Emergency Management Agency to fight and recover from wildfires, an E&E News analysis of FEMA records shows. The disaster agency gave California $1.6 billion in that period, mostly to pay for repairing and rebuilding fire-damaged infrastructure.

That’s a major increase from the previous quarter-century, when California received 15% of FEMA money that went to states for firefighting and recovery between 1988 and 2013.

The concentration of wildfire damage in California reflects the growing intensity of blazes and their increased frequency in populous areas.

The Getty Fire broke out Monday in Los Angeles, the most populous county in the United States, with 10 million people. The Kincade Fire started a week ago in Sonoma County, population 500,000, and has grown to 75,000 acres, nearly twice the size of Washington, D.C., as powerful winds have overcome firefighting efforts.

"I’ve been doing this job for 33 years, and I’ve never seen fire seasons like California has experienced in the last few years. I’ve never seen fires burn as aggressively and as intensely as some of these fires are burning," Mark Heine, chief of the Sonoma County Fire District, told E&E News.

Nowhere outside California has so much development occurred in and near areas that are fire-prone, with thick forests, extensive vegetation, a dry climate and powerful winds.

More than half of California’s 72 fire disasters since 2014 occurred in counties with more than 400,000 people, federal records show.

Although Alaska has the most acreage burned each year by wildfires, most of that land is in remote areas where the fires do not endanger people or buildings.

An Oct. 3 report by the Congressional Research Service says that the total number of wildfires and the acreage they burn "may be misleading, since many fires may occur in areas that are large and relatively undeveloped, with very little impact to human development or communities."

California accounts for 2 million of the 4.5 million homes that are at high or extreme risk of wildfire, according to a 2017 report by Verisk Analytics, a risk analysis firm.

That means wildfires in California have broad impacts, as seen by its mass evacuations and as power companies cut off electricity to large areas in windy conditions so that downed power lines won’t spark a fire.

Pacific Gas and Electric Co. has shut off power to millions of people in Northern California since the Kincade Fire began. Although the fire is contained to a sparsely populated part of Sonoma County about 75 miles north of San Francisco, PG&E has plunged populous and affluent suburbs next to San Francisco into darkness.

"Everybody’s furious at PG&E here," John Brooks, 63, said yesterday as he waited with dozens of people for three hours in a supermarket parking lot for a truck to deliver bags of ice. "There’s been colossal mismanagement, lack of investment and maintenance, and valuing profits over having a reliable electric system."

Brooks and his wife, Erika, live in Marin County, an affluent suburb just north of San Francisco, and have been without power since Saturday. They spent three hours Monday driving around San Francisco hoping to put gas in their car. Every station they visited was sold out.

"I start to think of my parents, who lived through World War II and waited all day in line to get a loaf of bread," Erika Brooks said.

Tin Nguyen’s small electronics repair shop in Marin County was one of just three businesses in the Montecito Plaza to be open yesterday, along with a Trader Joe’s and a Rite Aid. The other 18 businesses were closed.

Nguyen said he can do most repairs for customers without electricity, but he’s losing money every day the blackout continues.

"They just get away with murder," Nguyen said of PG&E.

Marin residents such as Joseph Hiseley are prepared for the blackout because they heeded the constant warnings about being ready for a major earthquake. "We were told to be prepared for 72 hours without power," Hiseley said. He used his generator for the first time in recent days.

"It’s inconvenient," Hiseley said of the blackout. "But given the alternative — massive fires that can’t be controlled — I suppose it’s the better choice."