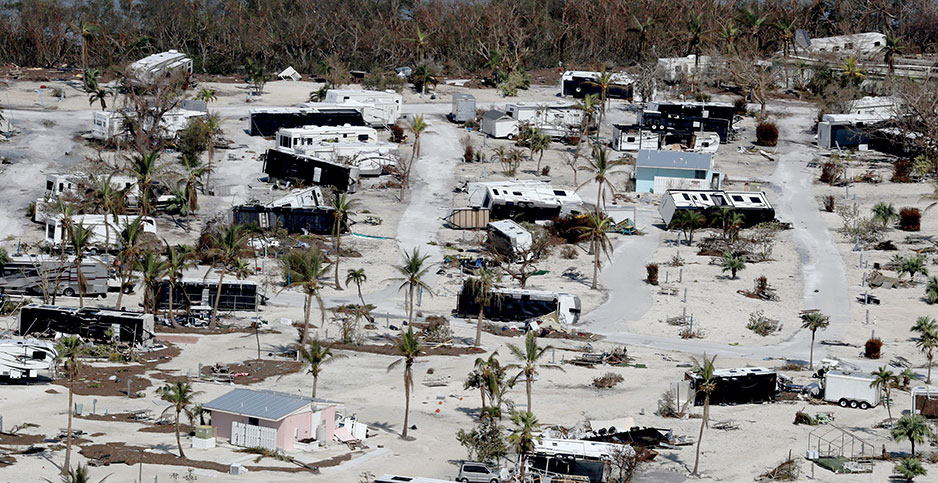 ISLAMORADA, Fla. — Darren Iorio heard that the Florida Keys boast some of the sturdiest building codes in the country. He didn’t think they counted for much as he hauled debris from his crumpled mobile home.

Down the road, candy-colored concrete houses stood on one-story-high pillars. But in Iorio’s neighborhood, Hurricane Irma’s 130-mph winds ripped through the thin metal siding of trailers and toppled trees onto the crushable rectangles. Iorio’s home was rocked by the storm surge — at least 3 feet high, he reckons, judging by the water lines along his walls.

Irma destroyed about 1 in 4 homes on the Florida Keys and damaged most of the others, according to a Federal Emergency Management Agency estimate. After a decade of false alarms, the hurricane offered locals a reality check that these low-lying islands face fundamental vulnerabilities from storm surge and accelerating sea-level rise. The newer homes are built to withstand those threats; many of the older and cheaper ones are not.

Iorio stood beside a gash in his yellow mobile home. It’s wide enough to walk through. "We’re all aware that this could’ve happened," he said. "It’s kinda the price you pay for living here. I mean, this is an unbelievable place to live."

The 44-year-old carpenter said it doesn’t take a scientist to know warming waters will fuel even stronger storms in the future. He calls it a losing battle. But that’s not going to chase him off the Keys.

That’s a common sentiment here, regardless of climate politics. The islanders who worry about global warming in the abstract look at the Keys and see their home. And those who don’t buy into climate science consider Irma an inevitable part of nature rather than a warning to leave.

Jon Studley has lived on the Keys since 1994, and he considers it just as safe as any other part of Florida. Unlike the mainland, he knows how to survive around here: The fire department has enormous tanks of fresh water, and his rich neighbors have huge pantries. Wearing camouflage shorts and a stained T-shirt, the 52-year-old said he weathered the storm in a nearby multimillion-dollar estate.

As for the long-term threat of rising waters, he said, "The Keys aren’t going anywhere."

Irma damage isn’t as stinging as 1992’s Category 5 hurricane. The docks still sit in the same place they always have, and their scum lines come to the same height too, he said. "It’s like, we don’t see it. So it’s hard for us to swallow the rising seas thing," he said.

Southeast Florida has seen 3 inches of sea-level rise since 1992, about the same as the rest of the country, according to the Southeast Florida Climate Change Compact, a working group of four counties with a combined population of about 6 million people, including the Florida Keys.

Projections call for that pace to quicken, driven by variations in the Florida currents and Gulf Stream. Seas here could rise by 2 feet as soon as 2060. As that happens, the archipelago will face higher surges from hurricanes.

Storms like Irma might serve as a wake-up call, but they’re unlikely to drive away islanders intent on staying put, said Mark Abkowitz, a professor at Vanderbilt University’s School of Engineering who studies disaster preparation and response. Raising their risk awareness, he said, doesn’t necessarily lower their risk tolerance.

Even some people who consider themselves climate change believers say they haven’t seen much to worry about.

Richard Aguilar found less storm damage than he’d feared at his aunt’s home, which sits right on the water. With the hurricane having passed, he’s not worried about a few inches of higher tide.

The 47-year-old points out over the waves: "I grew up here as a kid, and I could see that sea wall — the water was always at the same level at the sea wall."

"I do believe there is a global warming and stuff like that … but I’m not seeing it, at least," he said, nodding toward his kids. "Not in my lifetime. Maybe in their lifetime, or my grandchildren’s lifetime."

The surge washed over the neighborhood, but the houses in the Key Largo Ocean Resort development sit high on concrete stilts, and the water never reached the main levels.

The land was once used as a trailer park, Aguilar said, but it was condemned a few years ago and developers built bigger, stronger houses.

Iorio, the carpenter, is convinced the same thing will happen to his neighborhood now that Irma’s destroyed it.

"I think they’re going to push us all out," he said. "I don’t think they care. It’s all about money."

For residents who have less money, the balance between resilience and living costs can be a lose-lose situation.

Monroe County already faces an affordable housing crisis driven by high property values and low wages, according to a 2015 study from Florida State University. Mobile homes are among the cheapest housing options available, and the most vulnerable. Making them more resilient would make them more expensive.

The Keys are flat, low-lying and strung along more than 100 miles of water. Safeguarding the islands against rising seas is a daunting task. The nearby reef offers some protection from strong storm surge, but it’s in ill health.

In an area dominated by beachside mansions, banning trailers outright could leave people with nowhere else to go.

Keeping them around, though, invites scenes like the one found at the Sunshine Key RV Resort & Marina.

Past the police checkpoint at mile marker 73, authorities allow only emergency vehicles and a few others on sanctioned business. This marks the Middle Keys, which took the brunt of Irma’s force. It’s quieter down here, the island breeze pierced occasionally by sirens as ambulances and firetrucks speed along the highway in convoys of five or six.

The convoys pass Sunshine Key, where dozens of shredded mobile homes cover the rocky ground. The wind sheared some in half — ripping roofs and walls off, exposing armchairs and toilets inside. Some trailers rolled over and others disgorged their contents over the park: pink swimming goggles, cabinet paneling, ruined sofas.

Authorities say Irma’s death toll could continue to rise. They’ve counted at least eight dead in the Keys related to Irma, but police and soldiers are still searching homes.

Not all was placid past mile 73, though. In the city of Marathon, three Shih Tzus — Negrito, Donatello and Cha Cha Cha — guarded a canal lined with boats. Their owner is Don Ewing, who defied the evacuation orders to keep an eye on his 50-foot sailboat.

Ewing — a 66-year-old who sported an Ernest Hemingway beard and wore only boat shoes, dark shorts and a catheter bag — said his sailing experience has taught him how to handle tough wind and water. He brought his dry-fit, full-body survival suit from the boat into the house in case the storm got too strong.

"Worst-case scenario, I was [planning on] jumping into the survival suit, taking my three Shih Tzus and tying them into that life preserver there — and I was going to hit the water," he said. "I knew I’d survive. I figured my dogs would too."

Ewing dismissed anthropomorphic climate change as "absolute horseshit." He grew up in the area, and he’s come to see the value of the local fishing and environmental laws. But he thinks President Trump has struck the right note on regulating industry and energy.

"Climate change is nothing more than ‘Shit happens,’" he said. "And this [storm] right here? Shit happens."