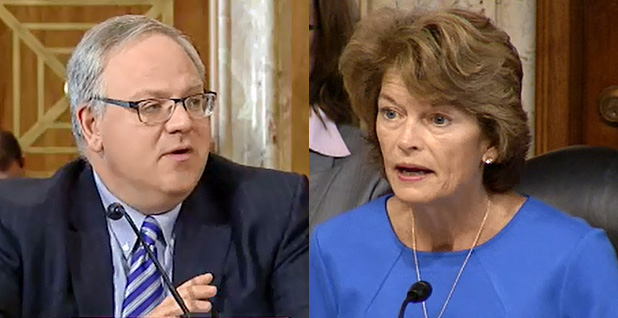 The Senate Energy and Natural Resources Committee today approved David Bernhardt as Interior deputy secretary in a 14-9 vote, paving the way for his confirmation by the full Senate.

Democratic Sen. Joe Manchin of West Virginia and Sen. Angus King of Maine — an independent who caucuses with the Democrats — joined all 12 Republicans on the panel to advance the nomination, which several environmental groups oppose because of Bernhardt’s career as an oil and gas lobbyist.

"There is nothing wrong with Mr. Bernhardt representing these clients as their lawyer, but giving him the power to adjudicate his former clients’ interests as deputy secretary of Interior raises serious appearance of conflict-of-interest issues," Cantwell said before the vote. "I do not understand how Mr. Bernhardt expects to have an open process on these issues."

Bernhardt, who has served as chairman of the natural resources department at the law firm Brownstein Hyatt Farber Schreck LLP, previously promised, if confirmed, to "not participate personally or substantially in any particular matter involving" his former clients or "specific parties in which I know the firm is a party or represents a party" for two years, unless he receives authorization to do so.

Administration aides have said they thoroughly vetted Bernhardt on ethics. They and other defenders call him an experienced nominee. In addition to his lobbying career, the Coloradan has worked as a Capitol Hill aide and served as an Interior official during the George W. Bush administration. Bernhardt has taken heat over allegations of mismanagement at Interior during his tenure there, including a drug and sex scandal at the former Minerals Management Service and political interference in endangered species decisions.

He has addressed those allegations and elaborated in responses to committee questions for the record obtained by E&E News on Friday (E&E Daily, June 5).

But that hasn’t satisfied green groups.

"Since people in this country who want a government that works for them cannot depend on Congress to hold these individuals with egregious conflicts of interest accountable, they will have to do it themselves through federal ethics watchdogs," Greenpeace USA senior climate campaigner Diana Best said after the committee reported out Bernhardt’s nomination. "The list of issues Bernhardt has profited from as a lobbyist should be enough to recuse him right out of a job."

The League of Conservation Voters yesterday sent a letter to the full Senate — before the committee vote — urging it to reject Bernhardt’s nomination (E&E Daily, June 6).

While Bernhardt’s nomination has generated controversy among Democrats, the support of Manchin and King today indicated he could garner more Democratic votes than expected when it comes before the full Senate.

"I believe all four of these nominees are capable, competent and well-qualified for the roles that they have been selected for," ENR Chairwoman Lisa Murkowski (R-Alaska) said before the votes.

More committee Democrats, including Cantwell, supported the DOE and FERC nominees. But it was the FERC nominations, not Bernhardt’s, that sparked protests during today’s business meeting. Protesters interrupted proceedings, shouting down Cantwell at one point, yelling, "FERC is all about the expansion of fracking" and "You are a rubber-stamp committee."

When asked after the meeting whether she was surprised by the protests over FERC, Cantwell simply said, "FERC always needs oversight."

Murkowski expressed some frustration over the administration’s sluggish pace in sending over agency nominations for her committee to consider.