Spotlight on Murkowski ‘intense’ and ‘suffocating’ 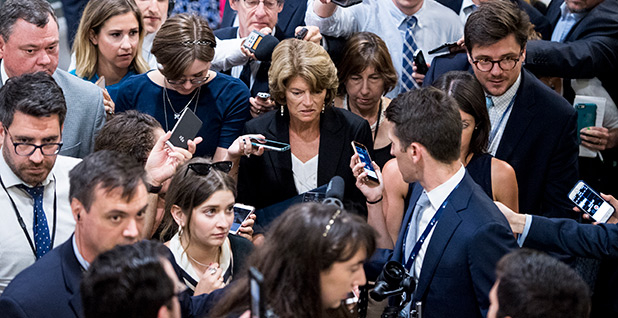 Sen. Lisa Murkowski (R-Alaska) in the middle of a gaggle with reporters on Capitol Hill. Bill Clark/CQ Roll Call/Associated Press

Just like last July, when GOP leaders were attempting to round up votes to make good on years of campaign promises to repeal the Affordable Care Act, the Energy and Natural Resources Committee chairwoman quickly found herself besieged by reporters wanting to know her views on the pick.

"That was the most intense day," Murkowski told E&E News last week of the frenzied media scrums that surrounded her in the wake of Trump’s announcement. "That was really suffocating."

It’s a scene that she knows will be repeated in the weeks ahead until the final roll call vote on Kavanaugh, who would replace the retiring Justice Anthony Kennedy.

As one of the few moderate GOP senators, Murkowski’s vote is pivotal in the chamber, where Republicans hold a slim 51-49 margin.

Murkowski is usually a reliable vote for Majority Leader Mitch McConnell (R-Ky.), but her more centrist views on women’s health care issues — she supports abortion rights — place her at odds with the bulk of her GOP colleagues.

As a result, for the second time in as many years, Murkowski finds herself in the glare of the media spotlight she’d rather avoid (E&E Daily, May 11, 2017).

On health care, President Trump personally tried to sway Murkowski into the repeal camp during a tense phone call.

However, Murkowski months later sided with her GOP colleagues to support tax reform legislation that repealed the individual mandate portion of Obamacare, a partial victory for repeal advocates that also netted Alaska the longtime goal of opening the Arctic National Wildlife Refuge to oil and gas drilling.

Murkowski has offered few clues as to how she’ll vote for Kavanaugh, whom she supported in 2006 for a seat on the U.S. Court of Appeals for the D.C. Circuit.

And when Trump announced last week he would tap Kavanaugh, Murkowski said in a statement that she intends to review his opinions on the D.C. Circuit, his responses to the Senate Judiciary Committee, as well as the American Bar Association’s qualification ratings.

"I just don’t want to come in and say, ‘Gosh, your kids were so cute at the announcement,’" she said Thursday. "I want to have the opportunity to really ask some thoughtful and thorough questions."

In an interview with Alaska reporters last week, Murkowski downplayed the notion that the fate of the 1973 Supreme Court ruling Roe v. Wade, which found that woman had a constitutional right to an abortion, could be overturned by having Kavanaugh on the court.

During that interview, Murkowski said she had spoken directly to Trump on the matter, telling him in a "very direct conversation" that even broaching the issue of Roe with potential nominees would be inappropriate.

"He confirmed that he had not and would not," Murkowski said, adding that it is her job as a senator to determine whether Kavanaugh "will do what I think most Americans expect him to do, which is to basically follow that law, interpret the law, not create new law, not be that activist judge."

Abortion, not surprisingly, is the subject of a multimillion-dollar ad buy by Demand Justice, a liberal group opposing Kavanaugh, that has already bought airtime in Alaska and Maine to pressure Murkowski and Collins (E&E Daily, July 9).

Murkowski told E&E News last week that it was too early to tell whether the Supreme Court pressure will match or exceed that of the health care fight, but she was unfazed by the ads being run in her state.

"I’m not home, I’m not watching the TV there," she said. "I feel the pressure is coming from me because this is a lifetime appointment, this is a Supreme Court justice."

She also suggested that for her, the stakes may be higher than the health care fight.

"What we were dealing with last year with health care was legislation — very, very significant, very important on a host of different levels," she said. "But legislation is something that you can fix it, tweak it, do whatever you want later.

"But this is a Supreme Court justice, this is a lifetime appointment, so I take it very, very, very seriously."

However the weightiness of the decision, Murkowski may have more breathing room on Kavanaugh’s nomination than she did on health care and tax reform. That’s because the support of a handful of moderate Democratic senators up for re-election is considered to be in play for the Supreme Court seat — votes that weren’t available during the earlier, highly partisan legislative pushes on both issues.

Additionally, Murkowski has already notched key wins on long-standing priorities, including opening ANWR and winning administration approval of a gravel road through the Izembek National Wildlife Refuge in southeast Alaska, thereby removing them from any horse-trading to confirm Kavanaugh.

Pressed by a reporter last week on Kavanaugh after a hearing of the ENR panel, Murkowski also made clear she doesn’t intend to make news on the Supreme Court until a time of her choosing.

"You know I told Alaskans they would hear it first," she said.