Spring arrives in U.K. a month earlier than it did in 1980s 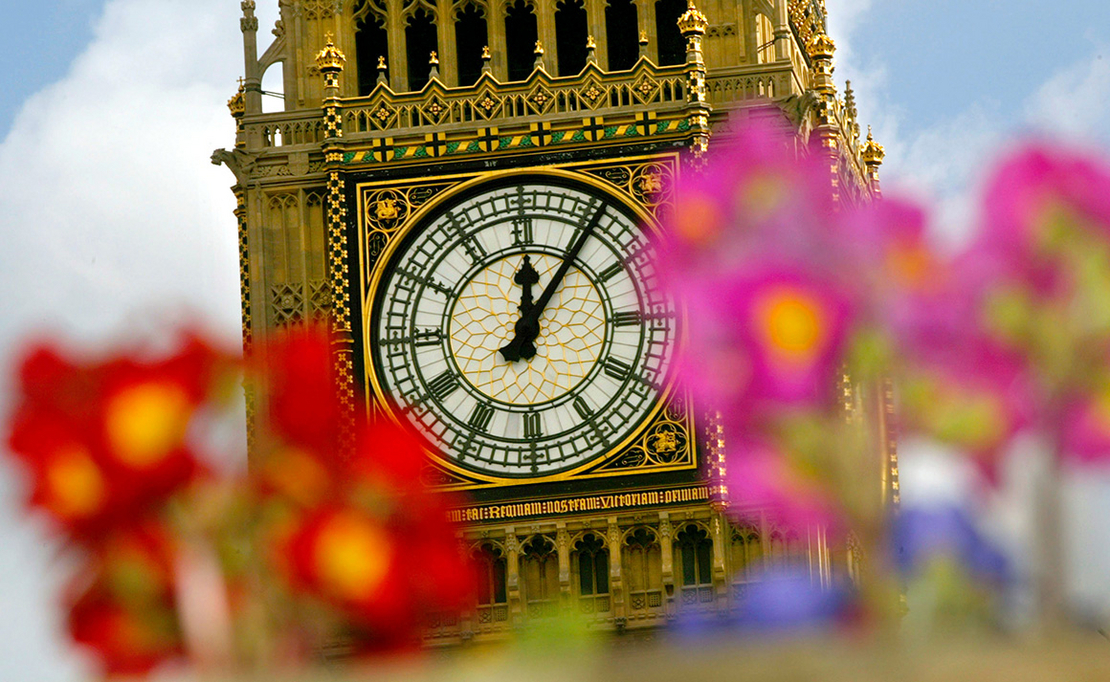 The clock face of Big Ben is seen through a bed of spring primroses in London on March 5, 2002. Scientists have determined that spring has been coming earlier in recent decades because of climate change. Sion Touhig/Getty Images

For more than 200 years, scientists have documented the changing seasons across the British Isles. Now, these long-term records have revealed a concerning trend.

Spring — defined by the blooming of flowers after a long winter — is arriving nearly a full month earlier than it used to.

The findings were published yesterday in Proceedings of the Royal Society B, a biological sciences journal published by the United Kingdom’s national science academy.

The study drew on more than 400,000 individual observations of flowering plants from around the United Kingdom, dating all the way back to the year 1753. These records, collected and organized by U.K.-based nonprofit the Woodland Trust, now constitute the United Kingdom’s largest database devoted to the study of seasonal changes in plants and animals.

Many of the earliest records were kept by botanists. But today, anyone can contribute. That means the number of observations has dramatically increased in recent decades.

“Nowadays, we would say this is basically a citizen science dataset,” said Ulf Büntgen, a scientist at the University of Cambridge and lead author of the study. “Everyone who wants goes in the garden, observes some flowers and makes a note.”

Büntgen, who previously lived in Switzerland, came across the database a couple of years ago after moving to the United Kingdom. He became interested in whether the timing of the spring bloom has changed in response to global warming.

After combing the database and analyzing hundreds of thousands of entries, spanning more than 400 different plant species, the researchers found a clear pattern. Since the mid-1980s, the average date of the first flowering has advanced by about a month compared with all the years before.

The researchers next compared their findings with historical U.K. climate records, including temperature and precipitation. They found that the changes in the spring bloom are strongly correlated with rising temperatures.

Human-caused climate change is heating up the British Isles, just as it is in the rest of the globe. At the same time, a shift in a natural climate cycle, which affects temperatures across the North Atlantic region, has exacerbated that warming over the last few decades.

The combination of these two factors appears to have significantly accelerated spring’s forward march since the 1980s.

The United Kingdom is hardly the only place where it’s happening. Scientists are documenting the telltale signs of earlier springs all over the world.

Some studies, like the U.K. analysis, focus on the timing of flowering plants. A recent EPA analysis, for instance, found that Washington, D.C.’s iconic cherry blossoms — originally a gift from the mayor of Tokyo back in 1912 — now bloom about five days earlier than they did a century ago. There’s a similar trend happening in Japan (Climatewire, March 30, 2021).

A 2016 study published in Ecosphere examined the dates of both the first new blooms and the first new leaves in national parks across the United States. It found that spring is coming earlier in about three-quarters of the parks.

Other studies have looked at different indicators. Research has found that snow in some mountainous parts of the world is melting earlier in the spring. Certain bird species are migrating earlier in the year than they used to. Even the allergy-triggering pollen season is getting longer in some places.

While the return of warmer weather is often a welcome relief after a cold winter, these changes aren’t necessarily a good thing. Many plants and animals depend on one another for survival — but if they don’t adapt to climate change at the same pace, their relationship could be disrupted.

Certain flowers rely on insects for pollination, for instance. But if flowers start blooming too early, when bees and butterflies have not yet emerged, they could all suffer as a result.

Some studies have also raised the alarm about “false springs” — that’s when warm weather briefly returns after the winter, immediately followed by another cold snap. It’s a major threat to plants that start blooming or growing too early in the season. That’s especially true of agricultural crops, which are easily destroyed by a sudden freeze.

The new study highlights these risks yet again. If plants in the United Kingdom keep flowering earlier and earlier, while climate change continues to worsen over time, “the functioning and productivity of biological, ecological and agricultural systems will be at an unprecedented risk,” the researchers warn.

The changes in flowering plants present unavoidable evidence of the consequences of climate change, Büntgen pointed out. The planet, on average, has warmed by about a degree Celsius — that’s 1.8 degrees Fahrenheit — since the onset of the industrial era more than a century ago. Earlier springs are one concrete symbol of that warming.

“Everyone has huge problems understanding what does that mean, 1 degree?” Büntgen said. “Now this paper basically translates: 1 degree warming means one month earlier onset of the vegetation period. This is something everyone sees.”