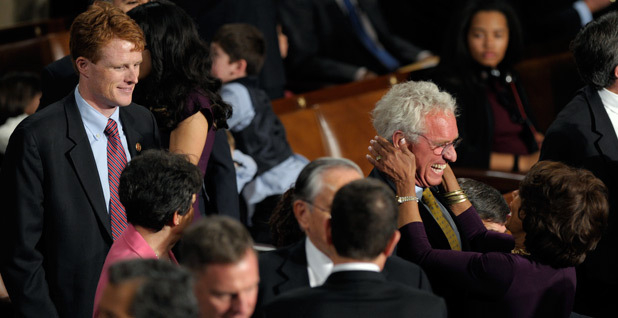 When Joseph P. Kennedy II launched Citizens Energy Corp. in 1979, the United States was mired in a decadelong energy crisis that seemed to have no end in sight.

Domestic production was down, and gasoline prices were skyrocketing. In an Oval Office speech that April, President Carter urged Americans to carpool to work more often to reduce the nation’s dependence on foreign oil, and promised to protect poor families from rising energy costs. "The energy crisis is real," Carter warned. "Time is running short."

Much has changed in the domestic energy landscape since then.

A recent spike in oil and natural gas production has turned the United States into a leading energy exporter. Citizens Energy has grown into one of the country’s biggest energy conservation organizations, with an array of for-profit energy firms that fund the parent company’s nonprofit work.

And Kennedy — the eldest son of former Sen. Robert F. Kennedy, who at age 16 shook hands with mourners on the train bringing his father’s casket to Washington, D.C. — went on to serve six terms in the House beginning in 1987, when he took over the seat that was previously held by House Speaker Thomas "Tip" O’Neill (D-Mass.), who retired that year.

As if replacing O’Neill weren’t hard enough, Kennedy had the added pressure of following in his uncle’s footsteps: John F. Kennedy briefly represented the Boston-based district from 1947-53 before his meteoric rise to the Senate and White House (a Kennedy has served in Congress for all but 3½ years since then).

Yet today, Kennedy’s son, sophomore Rep. Joseph P. Kennedy III (D-Mass.), and other members of Congress are still grappling with some of the same energy challenges Carter laid bare 36 years ago.

In January, the younger Kennedy was named to the powerful House Energy and Commerce Committee, one of the panels with jurisdiction over a sweeping energy reform bill that is taking shape this year in the House and Senate.

Kennedy’s district is also home to one of Massachusetts’ last remaining coal-fired power plants, placing him on the front lines of a simmering debate over the country’s energy future.

Since taking office in 2013, the younger Kennedy, 34, has fought federal regulators over energy price hikes in his Brookline-to-Fall River, Mass., district, which includes a swath of his father’s old 8th District seat.

It’s a regionwide problem in New England, where the cost of electricity and heating oil increases in the winter months during peak demand times.

New England has the highest retail electricity rates of any region in the country, according to the U.S. Energy Information Administration. New England residents paid 20.8 cents per kilowatt-hour in March of this year, 25 percent more than ratepayers in the Mid-Atlantic, the region with the second-highest electricity rates, the latest EIA figures show.

"There’s going to need to be a mix of resources to address" reliability and peak demand in the region, David O’Connor, a former commissioner of the Massachusetts Department of Energy Resources, said in an interview. "There’s no single panacea."

The 2014 auction also projected a first-ever capacity shortfall due in part to the closure of Brayton Point, the 1,535-megawatt coal-fired power plant in Kennedy’s district.

After FERC approved the auction results last fall, the lawmakers wrote the agency in January asking for a re-evaluation of the auction process to ensure that it produced "just and reasonable" pricing standards for ratepayers.

"FERC’s failure to [review the auction] unfairly left the ratepayers of New England without appropriate redress," they wrote.

The fight over rising energy costs in the region isn’t new, of course — Kennedy’s father founded Citizens Energy Corp. to address that very issue in the late 1970s.

Citizens Energy began by purchasing home heating oil from Venezuela and other nations and providing it at below-market prices to poor and elderly Massachusetts consumers. By 1981, the company had provided 18 million gallons of heating oil to 150,000 residents, according to its website.

The company has since branched out into other energy fields as well, launching a subsidiary that sells power in dozens of states, solar and wind power divisions, and a conservation arm that focuses on energy efficiency.

Citizens Solar, which was founded in 2010, is now one of the leading solar developers in Massachusetts, according to the company. The firm operates nine solar projects across the Bay State with a combined capacity of 18 MW.

Despite its growth, Citizens Energy Corp. never lost sight of its original mission. Proceeds from the nonprofit’s energy ventures underwrite its ongoing fuel assistance program and other social services.

Citizens Energy Corp. declined to make Joe Kennedy II, who rejoined the company after leaving Congress and currently serves as its president and chairman, available for an interview.

"Joe recognizes how much energy costs impact the poor and make life difficult when you can’t afford to heat your home," said the spokesman, Brian O’Connor. "Citizens Energy was formed to try to make those and other needs more accessible."

When asked to discuss the elder Kennedy’s legacy, longtime political observers and environmentalists in Massachusetts all pointed to his work on energy policy.

"Joe [Kennedy II’s] commitment to making energy accessible and affordable has been decadeslong, from before he went to Congress," said George Bachrach, the president of the Environmental League of Massachusetts.

Rep. Kennedy, whose office turned down requests for comment for this story, may lack his father’s extensive energy chops at the moment.

But the second-term lawmaker and former assistant district attorney is quickly getting up to speed as he seeks to build a record of his own.

"A congressman from Massachusetts has to be able to speak on energy," said Larry Chretien, executive director of the Massachusetts Energy Consumers Alliance. Kennedy has a "little bit more background and understanding because of his exposure" to the issues, he added.

Kennedy talks to his father regularly and draws on his energy expertise, according to a source with knowledge of their interactions.

And as a member of the House Energy and Commerce Committee, Kennedy will also have a seat at the table for high-profile debates over energy policy in the years to come.

Kennedy’s leadership on energy issues is starting to show.

At a recent event in Lee, Mass., the Stanford University and Harvard Law School alum spoke at length about energy policy, citing rising electricity rates and the need for new transmission lines in New England as major concerns.

"We have to try and outline a strategy to take the steps we need to make in order to get a handle on electric rates," Kennedy said, according to a story in The Berkshire Eagle. "The energy markets aren’t functioning the way they should be."

In the years ahead, the fate of the Brayton Point power plant in Somerset, Mass., could emerge as the single biggest energy issue in Kennedy’s district. Brayton Point is one of four remaining coal-fired power plants in the state.

After buying the plant in 2005, Virginia-based Dominion Resources Inc. spent more than $1 billion to bring it up to federal air and water quality standards before selling it to Energy Capital Partners in 2013.

The power company promised to close the plant in 2017 — then sold it off to Houston-based Dynegy Inc. last year for $3.4 billion. Following the sale, Dynegy said it would move forward with the plant shutdown but didn’t reveal its future plans for the site.

Predictably, industry and green groups have lined up on opposite sides of the fight. Industry leaders and some area lawmakers want Dynegy to turn Brayton Point, which employs roughly 200 workers, into a natural-gas-fired plant. Environmentalists have used the showdown to advocate for more renewable energy development in the state.

"We’re trying to move the state toward better alternatives to coal. We’d rather see a solution that doesn’t involve natural gas," said Chretien of the Massachusetts Energy Consumers Alliance.

The fight has turned Brayton Point into a local flashpoint in the broader debate over U.S. EPA’s Clean Power Plan. President Obama has made the rule the centerpiece of his efforts to curb domestic greenhouse gas emissions. Republicans claim the regulation would kill the coal industry and cut thousands of jobs.

Under the rule, Massachusetts would be required to slash its power-sector carbon emissions by 37.7 percent between 2012 and 2030, a steeper cut than 33 other states.

State officials have argued that Massachusetts has already taken significant steps toward reducing pollution through state programs and the Regional Greenhouse Gas Initiative, a cap-and-trade program run by Massachusetts and eight other Northeastern and Mid-Atlantic states.

Dynegy spokesman Micah Hirschfield confirmed that Brayton Point is still on track to close in 2017, but said the company hasn’t decided the next step.

"At this point, we’re exploring all options," Hirschfield said.

In a letter to FERC last year, Kennedy expressed concern over Energy Capital Partners’ sale of Brayton Point and its impact on ratepayers. Kennedy also claimed that the power company, which owns other power plants in the ISO New England network, stood to gain an additional $77 million in revenue in 2017 and 2018 from higher regionwide electricity rates stemming from the plant closure. Energy Partners has disputed the claim.

Kennedy remains active in discussions about Brayton Point’s future. His office has held conversations with Dynegy about ways to move forward, a person familiar with the talks said.

Regardless of the outcome, Kennedy said recently that the process has helped him drill down on energy policy in his district and beyond.

"We had been focused on it initially as a local issue here because of the [potential] impact to the local community," Kennedy said in an interview last month with the radio station WSAR. "What that effort really morphed into was a much greater effort to try to understand what was working and what was not working with our electricity infrastructure."