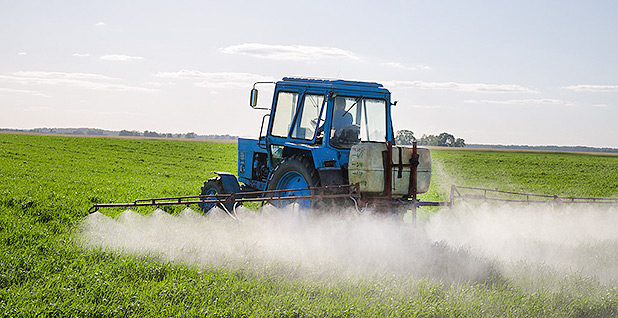 Environmentalists are fighting U.S. EPA’s decision to reject a petition to ban chlorpryifos, a pesticide that’s been used in agriculture for decades. Photo by Aqua Mechanical, courtesy of Flickr.

In a motion with the 9th U.S. Circuit Court of Appeals, green groups slammed the agency for rejecting a proposed ban on the chemical, chlorpyrifos, after past assessments pointed out risks.

The agency’s response "is remarkable in its utter silence as to EPA’s previous findings," the groups told the court. "Nowhere does EPA suggest that it has reconsidered its finding that chlorpyrifos is unsafe."

The groups, Pesticide Action Network North America and the Natural Resources Defense Council, petitioned EPA in 2007 to ban the pesticide. It has been banned indoors since 2000 but is commonly used in agriculture. More than half the apples grown in the United States are treated with it.

Under the Obama administration, EPA published numerous health assessments on the pesticide and in 2015 proposed banning it. The agency’s data found that current uses of the chemical posed dietary and drinking water risks to humans, especially children.

The 9th Circuit ordered EPA to make a final decision on a ban by March 31.

Last week, however, Administrator Scott Pruitt announced the agency would reject the environmentalists’ petition and not finalize the ban. In a statement, he said the pesticide was essential for agriculture (Greenwire, March 30).

EPA didn’t make a final determination on whether it should revoke chlorpyrifos food tolerances, instead saying it would continue to study whether the pesticide is linked to brain damage in children. The agency argued that it lacks the authority to take regulatory action until an Oct. 1, 2022, deadline established by Congress.

In their motion in the 9th Circuit today, the environmental groups accused EPA of having "sidestepped" the court’s previous order to finalize the ban.

"EPA’s response to the petition is no response at all and certainly not what this court ordered EPA to do," the environmental groups said.

They asked the 9th Circuit to establish a 30-day deadline for EPA to act on its prior findings that chlorpyrifos is unsafe and to set other deadlines for the cancellation process for the chemical.

The groups also want the court to force EPA to file six-month status reports until it revokes tolerances in foods.

The groups told the court that there is an "overwhelming body of evidence" showing chlorpyrifos exposures are unsafe.

"The science is clear that this chemical is dangerous, yet Administrator Pruitt is ignoring findings from EPA’s own experts and brushing off the courts to keep it on the market," said Erik Olson, a senior attorney and director of NRDC’s health program. "We are asking the court to step in to keep our children safe."

The groups are represented by environmental law firm Earthjustice. The court filing was expected, as pesticide critics this week threatened to turn to the courts to fight EPA’s decision (Greenwire, April 4).

The National Corn Growers Association today reiterated its support for EPA’s decision on the chemical.

"The overwhelming scientific consensus is that chlorpyrifos is safe for use by farmers, and we are confident that the pesticide review process will reaffirm this," NCGA President Wesley Spurlock said in an emailed statement.