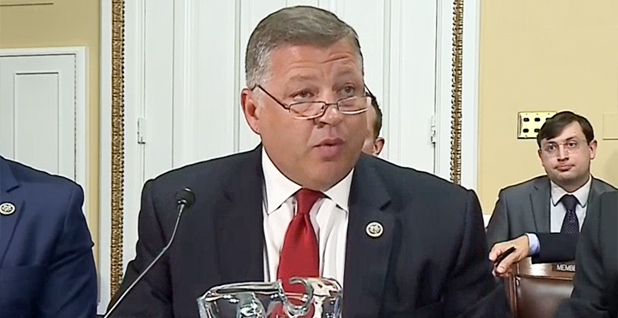 President Trump wants pork back on the menu, and House Republicans appear hungry.

Republicans banned the practice when they took over Congress, but it received a shot in the arm last week after President Trump unexpectedly expressed his support.

The GOP is seen as less favorable to earmarks than Democrats, but caucus members have increasingly come to see benefits in the old system.

Without the option of direct funding to woo intractable members, passing budget deals has become a near impossibility, and lawmakers of both parties lament the shift in spending authority from Congress to the executive branch.

A posse of Republican members spoke in favor of earmarks yesterday, framing them as a way to retake Congress’ power of the purse, as defined by the Constitution.

"We are elected by the taxpayers, who sent us here to represent our constituencies and solve problems for our district and our nation," said Pennsylvania Rep. Bill Shuster (R), chairman of the House Transportation and Infrastructure Committee.

"When we ban congressionally directed spending," he said, "we chose to hand over the authority to the unelected bureaucrats sitting in Washington, D.C., cubicles and political appointees."

The prospect of Trump’s long-touted infrastructure package hung over the meeting. Shuster, a forceful proponent, stressed Congress’ role in funding roads, sea lanes and other avenues of commerce.

Some GOP members have proposed a limited earmark resurrection, bringing them back for transportation and infrastructure projects alone. Rules Chairman Pete Sessions (R-Texas) recently spoke with T&I leaders on the matter, Politico reported.

Two of the biggest proponents of this tack testified yesterday. Reps. Tom Rooney (R-Fla.) and John Culberson (R-Texas) have pushed bringing back earmarks as a way to regain authority over Army Corps of Engineers and Bureau of Land Management activities.

Rooney, who is backing a bill to allow earmarking for projects in those agencies, often cites major water infrastructure needs that have stalled in his district, including repairs to the Herbert Hoover Dike on Lake Okeechobee (see related story).

Rooney said the House GOP had the votes to allow Army Corps earmarks at the beginning of this session, but held off. Bringing back pork just after Trump won on a "drain the swamp" platform was seen as bad form.

Rooney, however, argued that returning to earmarks would fulfill the president’s promise to wrest power from unelected agency officials.

"If the ‘drain the swamp’ election meant anything, it was that the people in Washington, D.C., that are unaccountable, faceless, nameless bureaucrats that don’t have to stand before the people every two years get to decide how to spend our taxpayer dollars," he said.

The session also saw a defense of earmarks from Alaska Rep. Don Young (R), whose infamous "bridge to nowhere" is synonymous with congressional spending gone bad.

Young insisted the ban impedes the work of representation House members are sworn to perform — and defended the bridge as an attempt to answer his constituents’ needs.

"The bridge has not been built," he said. "It should have been built. There’s never been a bridge anywhere that had anything on the other side until it was built."

Young called the charge that earmarks contribute to the debt "horse manure," noting they do not change total spending figures. Instead, he said, it would be Congress rather than agencies directing where the money goes.

"Until this is solved, we are no longer the Congress of the people," Young said.

Few Republicans at the hearing opposed earmarks. Wyoming Rep. Liz Cheney said there were too many abuses under the old system but said Congress must regain its funding authority.

North Carolina Rep. Mark Walker said it would be a "colossal mistake" for the GOP to return to the earmark system. Young shook his head during Walker’s testimony.

Minority Whip Steny Hoyer of Maryland kicked off the panel with an extensive defense of earmarks as vital to responsible legislating.

Members know their districts better than anyone, Hoyer said, and work with state officials to direct funding appropriately. The current system, he said, alienates members from their constituents.

Hoyer went on to endorse Democratic earmark reforms passed in the mid- to late 2000s to increase transparency. These included eliminating private-sector earmarks, requirements showing members had no financial ties to proposed projects, posting earmarks on government websites and reviews by relevant agencies.

Hoyer said Trump "wasn’t wrong" to back earmarks and said he would push his caucus to support a proposal to revive them. "It is my intention to recommend to my members that it be supported," he said.

GOP members said there was significant interest within the caucus. But some Democrats questioned whether House Speaker Paul Ryan (R-Wis.), who has expressed reservations, would allow a measure to move forward.

"I have the votes," said Young, after Democratic Rep. Alcee Hastings of Florida questioned whether earmarking could move under Ryan.