Staff bristle at holiday photos with Wheeler during pandemic 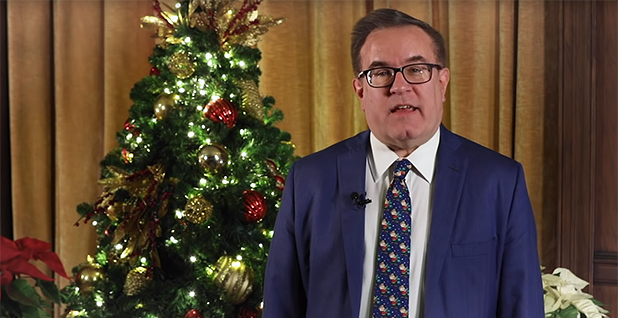 EPA plans to keep its holiday tradition of staff photos with the administrator this year despite the surge of COVID-19 cases. EPA Administrator Andrew Wheeler is shown delivering a holiday message in 2019. EPA/YouTube

EPA plans this year to keep its holiday tradition of staff photos with the administrator despite the surge in COVID-19 infections, including some new cases at the agency’s headquarters.

EPA Chief of Staff Mandy Gunasekara said the event will be held Monday morning in the administrator’s office on the third floor of EPA headquarters’ William Jefferson Clinton North Building, according to an internal email obtained by E&E News.

"Please join us for an EPA holiday tradition — photos with the Administrator," Gunasekara told agency staff in the email sent yesterday. "Appropriate social distancing guidelines will be in effect."

EPA employees were surprised to see that the tradition with Administrator Andrew Wheeler was moving forward this year during the pandemic.

Several said they did not plan to attend, partly because they are teleworking to avoid exposure to the virus and would have to travel to the agency’s headquarters in downtown Washington.

One EPA employee told E&E News that hosting the holiday photo event is "atonal" and "so remarkably stupid."

"It seems to not take into consideration that we are in a pandemic and it’s getting worse," said the employee. "They say social distancing is going to be observed. How is that going to work with a picture? Are you going to be on other ends of the room wearing masks?"

"It’s an inappropriate reason to take an unnecessary risk," another EPA staffer said about the event, adding it feels "frivolous and wasteful" and meant for the agency’s political appointees who are in the office to gather together.

One more EPA employee said their reaction when seeing the email was, "You’ve got to be kidding me.

"2020 at EPA has perhaps reached its apogee of ludicrousness," they said.

EPA spokesman James Hewitt told E&E News, "We feel this special occasion can be carried out safely and with social distancing."

Hewitt also said, "Additionally, this is a voluntary event, no one is compelled to participate. If any employee is uncomfortable with the setting we would encourage them not to participate."

Centers for Disease Control and Prevention guidance on holiday celebrations say indoor gatherings pose more risk from COVID-19 than being outdoors. Mask wearing and social distancing by attendees can help mitigate that risk.

Plans for staff pictures with the EPA administrator come as there have been some new COVID-19 cases at EPA headquarters.

Agency staff were told in an email on Monday that contractors in the Ronald Reagan Building and Potomac Yard, which is in Arlington, Va., had tested positive for the virus.

An EPA employee who was in headquarters, including the North Building’s third floor where the administrator’s office is located, also tested positive, according to an email last week.

Another email last week said a contractor who had been in EPA headquarters reported symptoms consistent with COVID-19 but later tested negative.

Wheeler himself announced last week that he had been exposed to COVID-19, but he later tested negative for the virus (Greenwire, Dec. 7).

"EPA Administrator Wheeler was exposed over a week ago, went into proper quarantine protocols, and has tested negative three times," said EPA’s Hewitt.

Dozens of EPA employees have been infected with COVID-19. At least one agency staffer has died from the virus.

EPA employees have been teleworking since March as the pandemic took hold, but the agency announced later in May it would begin a phased approach to reopen. EPA headquarters is in phase 2 of that reopening plan, where employees can choose to come to the office but are still encouraged to telework.

Most career staff at EPA remain working from home while some of President Trump’s political appointees at the agency have been working in the office at EPA headquarters.

EPA also announced last month that the agency has paused its reopening plans as COVID-19 cases are on the rise across the country.